Note: Hi! I’m Greg, and starting this week I will be your humble guide through one of the greatest TV sitcoms of all time: The Dick Van Dyke Show. I’ve been covering the series since May on my blog, and am excited to continue doing so for This Was Television. I don’t really have anything else to say before we get started, so let’s just jump right into the review.

I’d like to begin this review with two apologies. First, I’d like to apologies to any readers who’ve been reading these reviews since the beginning for all but guaranteeing that “Washington vs. the Bunny” would be the worst episode of Dick Van Dyke we’d see for a while. I also said that it was the last time sexism would be an issue for the series until much later in the season. No two ways about it: I was wrong on both counts. I remembered “To Tell or Not to Tell” as an episode which contained one really troubling scene towards the end but which was otherwise pretty decent, not as probably the most appallingly sexist episode of television I’ve ever seen. In fairness to myself, I was a young child when I saw most of these episodes, so of course my memory isn’t going to be perfect. Still, I have no idea how the awfulness of this one slipped my mind. And to those who are reading for the first time, I also must apologize for the fact that my first Dick Van Dyke review for This Was Television wound up being about this episode. Because it’s so bad. I wanted to scream while I was watching it.

I guess I should start by talking about the few things about the episode that work (and I do mean few). To begin with, there’s that opening scene where Sally and Buddy, Rob, and Laura all entertain at a party. It’s a similar type of scene to the one we saw in the show’s pilot, and is effective for the exact same reason: it’s just plain fun to watch these talented performers perform. Buddy and Sally do a bit where they sing and tell bad jokes while hitting each other on the head that is hilarious, and Rob’s impression of Buddy walking his dog is flat-out brilliant. Finally, Laura brings down the house with some terrific dancing. End scene. So that’s one bright spot. Anything else? Well, Sally has some great lines. And Buddy’s “go ahead, tear your hair out” to Mel had me laughing out loud. That was nice, in that it served to keep my blood pressure from rising too much.

Because the rest of this episode made me incredibly angry. The sexism in “Washington vs. the Bunny” was equally horrible, but at least it was largely limited to the episode’s atrocious second half. In “To Tell or Not to Tell” it begins from the moment Rob starts talking to his co-workers about how happy Laura was after dancing last night. Buddy immediately launches into a discussion of how Rob has “lost a wife and gained a roommate”—meaning that Laura is now going to want to resume her dancing career, which he says is a bad thing. Some of the comments are meant as jokes, but most of it is meant as a semi-serious warning. According to Buddy, “all career women are the same” and will jump at the chance to stop being proper housewives and return to their careers. Do you want to throw up yet, or shall I go on?

You good? Okay, because it gets worse. To begin with, Rob’s response to Buddy’s comments is just as bad. Instead of calling Buddy out for behaving like a misogynistic loser, he simply tells him that there’s no way this could happen with Laura. She’s happy staying at home. So in other words, it could be an issue with (and these are my quotes, not the episode’s) “other wives,” but not “his” Laura. She’s content to remain in her appropriate sphere, and all is well. That is, until Mel—impressed with her performance from the previous night—walks in and asks whether Rob would be okay with Laura dancing on The Alan Brady Show.

Yes, you heard me. He asks Rob if he’d be okay with Laura dancing on the show. This is before anyone even asks her if she wants to. And if Rob had said no, that would have been it. Can you say patriarchal, sexist, and absolutely repulsive? The 1960s were obviously not a great time for gender equality in the United States (not that today is even close to perfect), so I’m honestly curious to know if this kind of thing went on a lot: husbands being able to veto possible employment without even consulting their wives. It probably did, but whether it did or it didn’t doesn’t really matter. Either way, it’s sickening to anyone with a functioning brain and sense of justice. I suppose it’s to his credit that Rob immediately calls Laura and tells her, even if he only does so because he’s sure she’ll say no. Still, the entire scene left me disgusted.

It may sound like I’m ranting here rather than actually discussing the episode’s quality, but that’s really not the case. I’ve just described a pretty lengthy scene within it, and you’ll note I didn’t mention laughing even once. There’s just nothing funny about sexism and misogyny, particularly when they’re presented as normal and acceptable the way they are in “To Tell or Not to Tell”. We’re not meant to laugh at Buddy’s grotesque comments, but with them. Maybe this was funny to a 1960s audience, but viewed through today’s eyes it’s simply extremely offensive. What few laughs there are come largely from moments and lines unrelated to the main story, such as that wonderful opening scene and Buddy’s insults of Mel. So the episode’s a failure however you look at it. 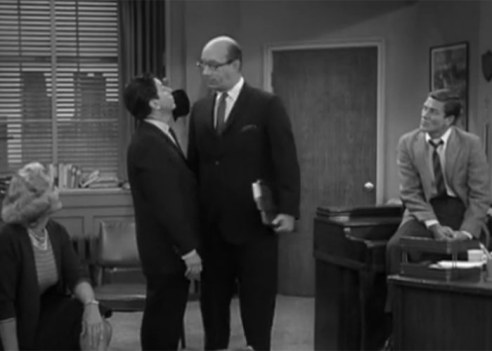 There are a few brief moments where the episode unintentionally says something interesting about the gender roles of the time period (gender roles that sadly a lot of people still think have value today). With Laura gone, Rob has to do the things she usually does, such as cooking, cleaning, and doing laundry. He’s of course terrible at it. This is not meant as any sort of insightful commentary about the typical male breadwinner marriage, but simply to make us laugh at the notion of Rob (a man) doing housework badly. Still, when Richie says he “likes Mommy’s bananas better”, we can see the typical 1960s nuclear family reflected in those words. There’s no difference between the bananas, but here’s a young child who’s used to his mother cooking for him and doing other things around the house. His father doing so instead is strange. It shouldn’t be, but that’s the way it was.

I’m probably reading more into this one line than is actually there, but that’s how desperate I was at this point for anything redeeming about this episode. There’s so little here that’s not completely appalling. Mel of course comes to Rob again when he wants to offer Laura a contract as a regular, and once again Rob at least does the right thing and tells her. Perhaps he recognizes that it’s not his call to make, particularly when he sees how upset she is at the idea that maybe she just wasn’t very good. Laura refuses the offer, citing both the physical toll dancing has taken on her as well as her desire to simply be Rob’s wife. This is another scene that really bothered me, as it implies that a woman has to choose between her career and marriage. While it comes under the guise of Laura making her own decision, it’s ultimately an extremely sexist way for the episode to end. Which is disappointing but fitting, I guess.

Your mileage on the jokes may vary. Perhaps you found a few more of them funnier than I did. But I don’t think there’s any denying that “To Tell or Not to Tell” is an example of a seriously dated episode of television. It’s probably more competent overall than “Washington vs. the Bunny”, but I for one disliked it even more. Like the average episode of Mad Men, it’s an example of many of the things that were wrong with this particular period in U.S. history. The difference is that we’re meant to find the sexism in Mad Men sickening, whereas here we’re supposed to think it’s okay or even a good thing. Obviously the fact that one show is a look back at the era and the other a product of it explains this fact, but it doesn’t change or excuse the end result, which is an episode that is absolutely terrible.

– “You know something, Buddy? The more you talk, the more I realize there’s something in what you say. And most of it’s pretty stupid.”

– Loved the look Mel gave Buddy when he walked into the office, and the way he didn’t even bother to address him before turning to greet Rob.

– Best Buddy insult of the episode had to be that “tear your hair out” line, but almost as good was his “oh, that makes an even one” in response to Mel mentioning he has an idea.

– Please note that we’ll be watching the episodes according to the order shown on the DVD sets, Amazon Prime, and Netflix, not the order in which they initially aired (which is how they’re ordered on Hulu). For this reason, I’ll be listing the name of the next episode after every review, just to make sure we’re all on the same page.

Next Week: “Sally Is a Girl”

5 Responses to “Review: The Dick Van Dyke Show, “To Tell or Not to Tell””

Leave a Reply to Review: The Dick Van Dyke Show, “Sol and the Sponsor” « This Was Television Cancel reply