As I was watching the first half of “Sally Is a Girl,” I thought I might have to write another 1000+ word diatribe about the many ways in which it was horrible. Like “Sally and the Lab Technician” before it, the episode revolves around the perception that Sally doesn’t behave like a woman is “supposed” to behave. And like that earlier installment, it contains a few scenes of appalling sexism—in this case mostly on the part of Laura—early on before transforming into something different and quite a bit better. But this episode is considerably stronger than “Sally and the Lab Technician,” for two key reasons. First, it subverts the sexism of its premise rather than simply avoiding it, which to me is something that’s much more worthy of praise. And secondly, it’s just a lot funnier overall, although not nearly as funny as “My Blonde-Haired Brunette” (which remains the show’s only truly great episode so far, although this will change pretty soon).

That first half is pretty bad, though. The episode begins with Rob trying to get together a poker game. Buddy agrees to play, but only if Laura doesn’t, because he doesn’t play poker with women. At this point, Sally remarks that she doesn’t either. And when her name is included among the potential players Buddy doesn’t object. Then Mel walks in and is invited, to which he says something similar. Once again, Rob lists the names of the people they have so far: Mel, Sally, Buddy, and him. Mel agrees to play, then leaves. Now, casting aside the obvious sexism of these remarks, this is also terrible storytelling: hammering home the scene’s point—which is that Rob, Buddy, and Mel don’t view Sally as a woman—repeatedly, as if we didn’t get it the first time. And the episode continues to do so for around another full minute before Laura calls to invite Sally and Buddy to dinner. 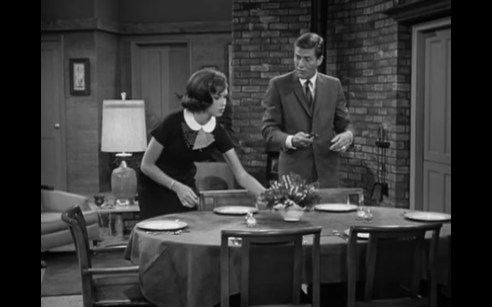 The next few minutes are where the “Sally and the Lab Technician” comparison really becomes apparent. As Laura and Rob are getting ready for their guests, she remarks that she doesn’t feel it’s right for Sally to be picking up Ted. This comment is similar to the ones made by Rob in the earlier episode, in which he said that Sally tends to “scare off” her dates with her wisecracks. What both of these sets of remarks are saying is that there’s a certain way that Sally should act while on a date, which is of course completely idiotic. And when she doesn’t act according to what is deemed proper by Laura and/or Rob (in this case, just Laura), we can see looks of embarrassment on one or both of their faces, as if she’s doing something wrong. And as it did in “Sally and the Lab Technician,” this infuriated me and distracted from what is otherwise a moderately funny scene.

Even worse is the subsequent sequence in which Laura blames Rob for all of this and tells him that he needs to start treating Sally like a woman. This scene is despicable on multiple levels. To begin with, there’s the disgusting implication that Sally is somehow a less than ideal woman because she’s “as strong as a bull,” or because she drinks brandy and smokes cigars with the guys. What is an ideal woman or an ideal man, anyway? There isn’t one. Every person is different, and this is something that should be celebrated rather than condemned. In addition, by suggesting that Rob and Buddy are the cause of all of this (and that Rob should take steps to fix it), she’s suggesting that men need to help women see themselves as appropriately feminine. This is a notion that’s almost as hideously patriarchal as anything in “To Tell or Not to Tell.” She’s not stopping to think that Sally is perfectly happy with who she is, and it makes for a scene that’s just dreadful.

However, if you view the episode as subverting the sexist ideas Laura expresses (and I do), then all of this bad material at least has a point. It’s still bad, but it sets up the episode’s far stronger and funnier second half quite nicely. Rob walks into the office the next day determined to follow Laura’s instructions. Among other things, he compliments Sally’s blouse, offers her a chair, takes out the typewriter for her, lambastes Buddy for making jokes about her, and tells her how lovely her hand is before kissing it. What makes all of this so funny are the confused looks from both Sally and Buddy. I especially loved the way she holds out her hand after the aforementioned kiss, as if to say “what is wrong with this guy?”. But it’s not really the guy or even the compliments that are wrong. Rather, it’s the idea that they’re necessary to remind Sally of her womanhood that is ludicrous. And by making us laugh at this idea, the episode makes that point quite effectively. 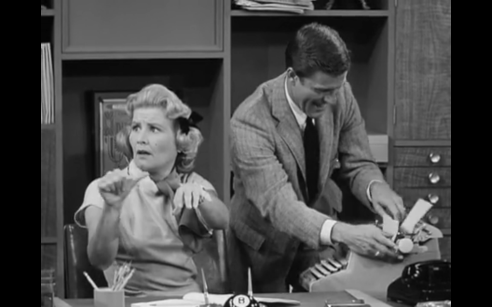 But “Sally Is a Girl” saves its biggest feminist masterstroke for last. Buddy becomes convinced that Rob has a crush on Sally, and with the help of Mel (watching those two team up is another highlight of the episode) is able to tell her about it in private. This is probably the funniest scene here, mainly because of Sally’s hilarious reactions to the knowledge that there’s a “him”  in her life that she doesn’t even know about. Indeed, from here on out Sally completely owns this episode. And it’s awesome. First she gives Rob a kiss on the cheek as she’s leaving, which along with Buddy’s accusatory comment causes him to realize what’s going on. Then, when Rob and Laura—who are both equally distressed at what’s seemingly happened— are at home, she shows up with Ted.

If I were to describe this scene without any context, you probably wouldn’t think it was feminist at all. After all, Sally pretends that her car broke down—and that she’s completely clueless about how to fix it (a common stereotype about women that unfortunately persists to this day)—just to allow Ted to save the day. In other words, she seems to be reinforcing the inequitable gender roles of the time period, which of course makes Laura happy. But the joke’s on Laura, Rob, and perhaps most of all on the thoroughly detestable Ted. Because what Sally’s really doing here is messing with everybody.

How do we know this? Well, we never see Ted again after this episode, which tells us that Sally wasn’t acting demure in order appear more attractive to him. This is also consistent with what we know about the character. Sure, she may joke about quitting work once she finds the right guy, but she’ll never be interested in being the kind of wife a male chauvinist loser such as Ted wants. That much has always been clear. Which means that she’s doing this for two reasons: to get Laura off her back, and to have a laugh at everyone who’s been meddling in her life. The very funny follow-up scene with Rob makes this even more clear, as she reveals that she’s known the true reason for his over-the-top displays of gallantry, and has simply been letting him continue because she enjoyed it. This is a woman who’s both in complete control of her life and comfortable with who she is, in spite of the societal pressures of the day—and people like Laura and Ted—telling her that’s not the right way to be.

It’s hard to imagine an episode which began with a discussion about excluding women from a poker game come through with an ending that is so decidedly and wonderfully feminist, but there you have it. While “Sally Is a Girl” isn’t even close to being one of Dick Van Dyke’s finest installments, the quality of this ending (and of the episode’s second half as a whole) ensures that it winds up being a successful and funny episode of comedy television for the most part. This isn’t the highest of compliments, of course. But after the awfulness of “To Tell or Not to Tell,”  an episode of this quality will do just fine, especially since I believe we’ve reached the point where the series goes from highly uneven to generally excellent.

– When Buddy asks Mel if he’s “noticed something funny going on around here,” Mel’s response is: “no, and that includes the scripts.”

– Note: I’m watching the show in DVD/Netflix/Amazon Prime order, which for season one is vastly different from the original air date order shown on Hulu. I’ll be including the name of the next week’s episode at the end of every review, so that any people who are watching using that site will still be able to follow along with these reviews.

One Response to “Review: The Dick Van Dyke Show, “Sally Is a Girl””