By now, we’ve all heard that phrase and probably know the mostly untrue story about the development of Miami Vice. Legend has it that then-president of NBC Brandon Tartikoff wrote those two words in a development meeting and the result of those words was Vice.

Of course, this isn’t really true. The man credited with actually creating Vice, Anthony Yerkovich (formerly of Hill Street Blues), suggests that he actually came up with the idea after learning more information about police use of confiscated drug dealer property. But even then, Yerkovich’s conception story disregards the show’s most dominant creative force: Michael Mann. Mann, the film director with a distinct aesthetic vision, never directed an episode of Vice, but took his producer role very seriously. All accounts are that Mann established the show’s innovative visual pallet (including the “no earth tones” rule) and apparently, by episode six of the first season, Yerkovich was out and never involved with Miami Vice again. The confusion surrounding how Miami Vice made it to air and lasted through its first season reinforces the wacky nature of television’s managerial practices, but also suggests that sometimes, confusion or controversy results in some pretty damn good art.

This opening two-hour episode of Miami Vice fits that bill. While “MTV Cops” might be a phrase of legend, it’s a stunningly accurate way to describe this pilot effort and one that evokes a degree of style and cool that I can’t quite recall experiencing before. There are bumps along the way (mostly because this is a double-length episode, something I don’t particularly enjoy), but it is easy to see why Vice had such an impact on popular culture in the mid-1980s. If you follow me on Twitter, you probably noticed that I was discussing the show on Sunday and honestly, the pilot makes it hard to not get swept away in the sea of sweat, sin, sounds, and style of this pilot.

But before I drool any more, let me back up for a second and discuss why I am watching and writing about this show. For whatever reason, I’ve made it my mission to detail the evolution of the police drama since the 1980s. Although the genre has a bit of a bad wrap and/or feels tired in 2012, I am fond of it and especially intrigued by detailing how we got where we are with NCIS– and CSI:-like shows ruling the airwaves. I generally know how and why this happened, but I want to get first-hand experience with the process of this evolution. So, I started with Hill Street Blues, the godfather of contemporary quality television and also a groundbreaking force in the cop drama genre, and now it seems fitting to check in with the next “big” show that came down the pike. Vice is also dramatically different from Hill Street Blues, which makes it even more exciting to take on over the next dozen or so weeks.

In any event, I come into my Miami Vice viewing with absolutely no prior experience with the show. I have a basic knowledge of the characters and the style and have seen the 2006 film version directed by Mann (which I liked better than most, but I love Michael Mann). Maybe I’m speaking out of turn, but it seems to me that in 2012, the show isn’t remembered that fondly and instead it is pointed to as a relic solely embodying the 1980s (this is, apparently, a bad thing). While that’s not to say that Vice doesn’t have its contemporary fans, the show is never discussed like Hill Street or even Law & Order are.

With that in mind, I honestly expected this pilot to be sillier and cheesier than it was. Obviously, I presumed that there would be a stupid amount of pastel colors and synth-heavy music. Thankfully though, “Brother’s Keeper” isn’t silly or cheesy at all. And even more surprisingly, the pastels and synths come in healthy doses. Indeed, the opening moments of this episode undercut expectations* by beginning in dark, grimy New York with Tubbs tailing the might-as-well-be-mustache-twirling Calderone. However, once the action does make its way to Miami, Mann’s visual flair and the music are more pronounced.

*Interestingly, starting in NYC subverts MY expectations as a viewer considering Vice in hindsight. I imagine that viewers in 1984 were less surprised to see the show begin in a setting where most cop shows are set.

Much has been made about Vice‘s visual style and musical cues, but if you have never seen the show before, they are still pretty staggering. “Brother’s Keeper” doesn’t feature the most advanced or intelligence narrative and the characters’ pop culture-laced dialogue sometimes goes too far, but the visuals and the music make up for any weakness and carry the pilot to another level. Almost all of the episode’s most memorable moments are driven by images (whether that be the interesting location shots of Miami or the stylized angles and cutting), music, or both, with very little dialogue involved.

The most obvious example of this is the sequence near the end of hour two, with Crockett and Tubbs speeding through Miami to grab Calderone set to Phil Collins’ “In The Air Tonight.” Disregarding the stupidity of Crockett stopping at a payphone for a (admittedly powerful and minimalist) conversation with his ex-wife when he and Tubbs only have 25 minutes to get to Calderone, this scene is aces. Somehow, despite our cultural opinions of Collins and Vice, the two work together masterfully in a four-minute clip that exudes the kind of non-winking bad-assery we don’t really see in popular culture today. Miami Vice isn’t “in” on the joke because there is no joke—it treats the subject matter with the correct amount of weight.

Although the clear stand-out, this climax scene isn’t the only one of its kind. Early in the episode, Crockett and Tubbs meet for the first time as both are undercover posing as drug dealers, leading to Tubbs speeding off in a GO FAST BOAT (I’m disappointed they aren’t called this here) while Crockett chases him down in his car, and the sequence makes great use of nighttime Miami as it cuts back and forth between the two future partners. Throughout this two-hour episode, Crockett and Tubbs visit a number of shady docks and alleyways and do their fair share of speeding along the highway and oceanside. The pilot looks a little better during nighttime scenes, but the sunshine-drenched moments on Crockett’s boat and on the beach are nice as well.

The music has a similar impact here, with the cues somehow being both on-the-nose and still pretty awesome: “Body Talk” plays while Tubbs tussles with Calderone early on; “Somebody’s Watching Me” scores Tubbs’s undercover op in the strip club; “Girls Just Wanna Have Fun”  fuels the scene where snitch Leon gets gunned down by a man dressed as a woman, and obviously “In The Air Tonight.” The pilot plays things pretty straight so I have to imagine that these musical choices were not meant to be overly winking, but it’s hard to not interpret them as such. In any event, they work.

Together, the visuals and the music do, in fact, give Vice a music video feel that would have been perfect on MTV in 1984. The pilot unspools in a fairly conventional manner, but when these two elements come together to create little bursts of dialogue-light of storytelling, the show becomes something more than conventional. These bursts aren’t unnecessary or diverting and instead actually help push the story forward in a stylish yet economical fashion.

While Vice‘s storytelling aesthetic helps raise the stakes and give the events more gravitas, its also assists the two leading men in becoming more than they are. Unfortunately, Philip Michael Thomas needs that kind of help considering that as Ricardo Tubbs, his performance is all over the place in these two hours. I know that he’s undercover at times, but Thomas delivers lines with more than a handful of accents and inflections and although his energy is a great asset, there are times when it feels like he is trying too hard. The less he says, the better.

Don Johnson, however, needs very little help, and therefore, the show’s style only makes his Sonny Crockett seem like The Coolest Man on the Planet. Sonny is a complex, complicated character who works despite the fact that he spouts folksy advice in one scene and youthful pop culture references in another, and that’s likely a big testament to Johnson’s performance. Tubbs arguably has the darker past with the death of his brother haunting him, but Sonny is immediately more sympathetic because Johnson brings more depth and humanity to the table than Thomas. Although Sonny is cool as hell behind the wheel of a fast car or even faster boat, he’s still an emotional wreck that recognizes his faults and doesn’t necessarily use them as a crutch. Let’s put it this way: If you told me that Don Johnson literally slept with every woman in America between 1984-1985, I would believe you. 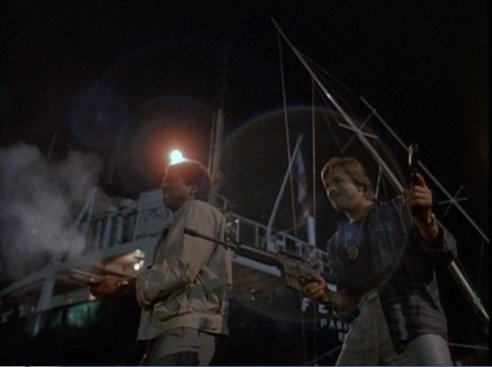 The transition from Hill Street Blues to Miami Vice is an instructive one. The former is a show that works so well because of its strong writing (along with its editing), whereas the latter is a stylistic juggernaut. Although I am not expert, it is easy to see how Blues represents a connection back to the 1970s and character-based storytelling, whereas Vice is the signaling of a new era in television storytelling that puts a new emphasis on visual aesthetics and musical choices. I would argue that the success of Blues allowed something like Vice to happen thanks to its narrative and aesthetic advancements, but whereas Hill Street used editing and documentary-like camera techniques to support the written narrative, Miami Vice allows its style to carry the narrative load.

Of course, this reliance on style works for a pilot. Moving forward, Miami Vice might need more to reach Hill Street Blues-like storytelling heights. Otherwise, “MTV Cops” becomes less of a celebratory badge of honor and more of an anchor, weighing the show down. I can’t wait to find out to see how this goes.