The first three animated original series produced by Nickelodeon—Doug, Ren & Stimpy, and Rugrats—all premiered on the same day, August 11, 1991. A lot of people love Ren & Stimpy, a surreal extravaganza featuring a chihuahua and a cat; both were voiced by Billy West after creator and original Ren John Kricfalusi, seemingly the Dan Harmon of children’s television at the time, got fired. But I didn’t like the animation style, and my mother made it fairly clear she found it inappropriate for kids. Rugrats, a show that centered on a group of talking babies, was even more popular, surpassing 100 episodes and spawning films and sequel series. But as I progressed through childhood, I didn’t really want to watch the adventures of babies very much, though I did appreciate Reptar (and, truth be told, Muppet Babies).

Out of those three initial animated shows, I latched onto Doug. In retrospect, it’s not hard for me to figure out why. While Ren & Stimpy and Rugrats both have their merits, I didn’t connect with them on a level beyond entertainment. Nickelodeon already had the beginnings of a successful live-action original programming lineup. Before the three animated programs debuted, the network produced comedies like Hey Dude, Clarissa Explains It All, and Salute Your Shorts (with The Adventures of Pete & Pete soon to follow), and game shows like Double Dare and this column’s namesake, Wild & Crazy Kids. But those shows didn’t really portray anything I could identify with. I was either too young to understand early teenagers, caught up in the whimsical narrative style of a show like Pete & Pete, or reacting to whatever mini-game kids were going through on a game show.

At the time I started watching, I was about the same age as Doug Funnie. I grew up in the same town my entire childhood, so I didn’t really understand the beginning of the show, but changing schools, making new friends, first crushes, discovering music, and recording my days were all things that resonated with me. Doug isn’t a universal experience, in almost the same way that Lena Dunham’s Girls isn’t universal in any way. It depicts a very specific vein of American culture, but if you fall within its parameters, then it shows off a surprising amount of depth. No, that doesn’t mean that Doug operates on the same level as a show as tightly controlled as Girls, but it does solve a lot of the criticisms I’ve read of shows that have a narrow cultural focus.

The first episode of the series, “Doug Bags a Neematoad,” introduces most of the particulars despite not being the actual pilot of the series (that’s the first half of the second episode “Doug Can’t Dance,” which features Billy West still finding his footing as the voice of Doug and some slapdash animation). The Funnies move to Bluffington from a few towns over, and Doug writes in his diary about being nervous for the move despite what seems to be his family’s satisfaction. His father takes pictures, his mother coordinates the move, and his sister Judy is a hapless beatnik, while the new neighbors are the eccentric Bud Dink and sarcastically dry Tippy Dink.

Doug needs to write things down in a journal. He likes to catalogue, to tell stories, to fantasize and create larger than life characters and scenarios, which is in direct contrast to his largely static and shy personality with everyone but Mosquito “Skeeter” Valentine. Skeeter grows from the kid who helps Doug order food at the confusing Honker Burger (based on In-N-Out Burger and its simple-yet-secretive menu ordering) to an incredibly loyal best friend with many shared interests. 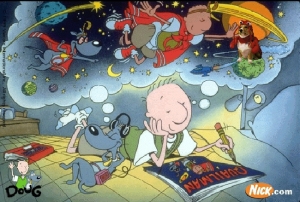 More than just being shy, Doug is crippled by social anxiety at times, so worried by the prospect of being a loser or a fool that he escapes into his fantasies where he’s some gallant figure able to overcome his fears—from combating a school bully to something as mundane as eating liver and onions for dinner. He’s a superhero capable of mind control as Quailman, a dashing James Bond superspy as Smash Adams, and an Indiana Jones-esque explorer as Race Canyon. He’s artistic without devoting his life to art, accidentally athletic at times when he gets lucky, reasonably intelligent, and extremely kind and thoughtful. He’s the Everykid, in the limited sense that a white suburban 11-year-old represents as many people from that demographic as possible.

Though Bluffington is a quirky, fantastical take on a suburban American town (though one with a wider variety of skin tones than humanly possible), it’s supposedly based on Richmond, Virginia—although since I’m a Bay Area kid born and raised, I can’t really identify any of those hidden details if they exist. It’s populated by a wide range of memorable supporting characters—the Dinks, Vice Principal Bone, and Chalky Studebaker to name a few—and Doug does have a fair amount of parental and sibling-focused episodes (the one about his dad helping him build a kite in particular comes to mind). But for me, Doug hinges on Doug Funnie’s friendships with three characters: Skeeter Valentine, Patti Mayonnaise, and Roger Klotz.

Doug and Skeeter go through a lot of friendship milestones over the course of the series, despite being very similar in interests. I mean, how many kids get to meet their music idols multiple times (most epically in “Doug’s Hot Ticket”), start a garage band that balloons to excessive size (“Doug’s Garage Band,” featuring some hilarious original music), and get into squabbles about which of their imaginary superhero alter egos gets to save the day. Skeeter is outgoing and barely ever nervous, but he and Doug are so close that when Skeeter finds out he’s moving at the end of the first season, he and Doug are crippled with fear that they’ll never see each other again. Never mind the logic of the situation, like the fact that Skeeter never asks his father any details about a sudden move overnight; the threat of losing a best friend overshadows realistic thinking. At 11, with only suburban social problems to worry about, losing a best friend is paramount. Everything else melts away.

Skeeter helps facilitate a friendly group outing with Patti and Beebe Bluff so Doug can sit with her on a Ferris wheel. In a lot of ways, Skeeter in the precursor to someone like Gerald on Hey Arnold, the ever-loyal best friend who occasionally gets the spotlight, but for all intents and purposes is there to be the supportive, less neurotic version of the series lead.

Doug’s interest in Patti never progresses beyond childlike obsession. His crush is entirely innocent since, after all, the kid’s only 11 years old. He feels incredible energy just from holding her hand getting off that Ferris wheel. But he does grow increasingly comfortable around her. He starts the series unable to talk to her without stuttering like a dolt, but gradually communication comes more easily. Patti is a bit of a tomboy, very athletic, with a paraplegic father. Doug imagines Patti fending off a multitude of suitors: in one fantasy sequence, he approaches Princess Patti in a tower as a medieval knight to ask her to go to the fair with him. His crush is consuming and at the same time almost unnecessary, since he’s incapable of really doing anything about it at his age. It represents that time when girls are suddenly there, noticeable, but not quite yet the focus of everything to young boys. One of the benefits of animation is that Doug remains 11 for the entire length of the show’s run on Nickelodeon. The kids don’t age, so to a certain extent neither do their motivations.

It’s pretty interesting to have Billy West voicing both the lead of the series and the main antagonist, Roger Klotz, as well (at least until West left the show over a contract dispute after it became a Disney property). Since one of the main arcs of the series depicts Roger and Doug growing to understand each other better, the many conversations West has with himself are illuminating in hindsight now that I know the voice cast. Doug and Roger yell at each other, suffer embarrassment at the hands of their respective grandmothers, and are united in fear over getting older and going to a new school.

Take the early season two episode “Doug Vs. The Klotzoid Zombies,” which begins with Doug’s friends all going over to Roger’s house without him. Doug fears that somehow they’ve fallen under some kind of spell from Roger, leading to an extended mission for Doug’s comic book alter ego Quailman, fighting again Dr. Klotzenstein. The fantasy sequence is a hilarious sendup of ’60s-era Batman villainy while at the same time a not-so-subtle indictment of greasy, unhealthy snack foods—products which make up a sizeable chunk of the ad revenue for a network aimed at children.

Doug didn’t last extremely long on Nickelodeon, but made a sizable run that was about average for a moderately successful children’s show at the time. When Disney acquired Jim Jinkins’s Jumbo Pictures, Doug made the switch to Disney’s Saturday morning lineup, moving the characters into junior high and updating the animation. This incarnation eventually racked up more episodes than the original run of the series. To some fans, the switch was blasphemous, but it didn’t irrevocably harm the quiet four seasons and 52 episodes on Nickelodeon that continue to rerun ad infinitum well into the new millennium.

I don’t really think it’s a question of whether Doug holds up after over two decade. Some of the jokes still land, some of the animation is a bit crude, the plot construction clunky and without a lot of development. But as a kid I learned a lot of simple lessons from Doug and paid close attention because I identified with the shy, gawky kid who was always writing things down in his journal. And Nickelodeon went three-for-three with its initial animated productions, which were successful enough that it subsequently went on a tear that yielded some of the defining cartoons of the decade and cemented the network as one of the most influential since the advent of cable.

Kevin McFarland is a freelance entertainment and sports writer from San Francisco currently based in Chicago. His work has appeared at The A.V. Club and ChicagoSide Sports. He is an avid Community and Northwestern football fan, despite the misery that inherently comes with both.