Welcome to People Who Matter, an occasional feature where we briefly spotlight influential and productive people from all facets of the television industry.

If you recall our first book club discussion covering Top of the Rock, I railed against the media’s mythologizing and frankly, obsession with NBC, its current failures and its previous successes. Of course, NBC as a network is even more obsessed with itself that it’s hard for critics and reporters not to discuss the past when the network itself is constantly referring and comparing. I really do wish we were more infatuated with CBS or any other network as much as we are NBC, but that’s just the way it is right now.

I say all of this because for as much as I like to rant about this, I’m just as guilty as anyone else. Take a look at my archives on TV Surveillance and you’ll see that I’ve talked about NBC more than any other network (give or take a USA Network). Here at TWTV, I’ve written about Hill Street Blues, Miami Vice and Seinfeld (among other things). Honestly, it’s damn hard to stay away from NBC, particularly when considering historical shifts and moments. So although I really do want to explore other networks’ history and “mythology” if you will, I’m going to kick-start this feature by continuing the NBC-focused rhetoric through a quick look at the career of Grant Tinker.

In contemporary discussions, the focus on NBC always brings up the net’s past triumphs but often disregards much specificity about who was responsible for those triumphs. We simply know that whatever the hell Jeff Zucker and Ben Silverman did, it did not work. But throughout the much of the 20th century’s second half, NBC had a number of great leaders atop the network that helped right the ship in times of need. While we obviously discussed Warren Littlefield quite a bit during book club, I’ve always been fascinated with a man who held his post a decade-plus beforehand: Grant Tinker.

For me, the most compelling thing about Grant Tinker is that he actually made himself a viable candidate for network head by doing an excellent job on the production and programming side. Jeff Zucker was clearly a joke and although Ben Silverman had some experience bringing international projects to the states like The Office, his work pales in comparison to the things Tinker accomplished with MTM Enterprises throughout the 1970s and 1980s. 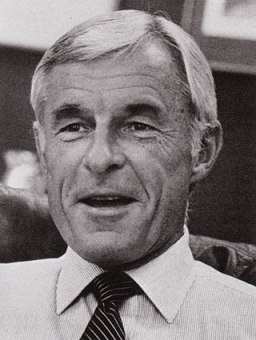 If you’re unfamiliar with television history, you might be even less familiar with MTM, but here’s just a brief rundown of some of the shows the production company, run by Tinker (and co-founded with his then-wife Mary Tyler Moore, hence the company’s initial-based namesake), helped shepherd to the airwaves between 1970 and 1990: The Mary Tyler Moore Show, The Bob Newhart Show, Rhoda,  Phyllis, The Tony Randall Show, Lou Grant, White Shadow, WKRP in Cincinnati, Hill Street Blues, Remington Steele, St. Elsewhere and Newhart. To be fair, there were a handful of failures mixed in there along the way–as there always will be–but generally speaking, MTM had one of the greatest runs in television history and the company still remains one of the most crucial in the medium’s history. When you look over that list, you find both comedies (MTM, The Bob Newhart Show) and dramas (Hill Street, Lou Grant, St. Elsewhere) that in some way altered those respective formats. I’ve talked a lot about HSB here, but MTM‘s impact on the sitcom style and focus can’t be go unnoticed, and St. Elsewhere is one weird, compelling entry in the medical genre.

Clearly Tinker didn’t produce, create or write these shows on his own. He had lots of help. If you scroll through the credits on those shows listed above, you’ll see some heavy hitters. However, one of the pillars of great leadership is the ability to bring great people together and let them do their thing and Tinker excelled at that while leading MTM Enterprises. James L. Brooks, Alan Burns, Steven Bochco, etc. The list goes on and on.

And Tinker parlayed that framework to his work at NBC when he took over the struggling network in 1981. According to the Museum of Broadcast Communications, NBC had only one show in the top 10 and two in the top 20 when Tinker came aboard, but even despite those ratings issues, Tinker worked to keep low-rated yet promising programs on the air. For example, Tinker and programming chief Brandon Tartikoff (who was admittedly influential in these successes) supported Cheers and Hill Street Blues in the early 1980s when they were being watched by very little amounts of people. Eventually, Tinker brought those two series together with Cosby, Family Ties and Night Court to create the first big Thursday night line-up, a day and schedule that still defines NBC to this day.

Under Tinker’s leadership, NBC grew out of the television cellar and became the place for quality television aimed at educated and urban youngsters, a move that also played a big part in the bright focus on the 18-49 and 18-34 demographics in the Nielsen ratings. Therefore, Tinker not only revitalized NBC and its schedule but also guided the industry towards certain audience-related trends. During Tinker’s tenure at NBC, the network also brought David Letterman into the late night fold on a more permanent basis, fortifying a spot they would then screw up a decade or so later.

Although I wouldn’t pretend to know everything about the ins and outs of network leadership over the last 50 years, I will say that Grant Tinker stands out because he flourished in two different but crucial roles. Tartikoff excelled at NBC and went to Paramount and didn’t do much or really get the chance to thanks to family tragedies. Warren Littlefield hasn’t done that much since he was outed from his post at NBC. Zucker and Silverman were and are creative bums. At other networks, the story is often very similar: Creative leaders do well and then come into network head positions only to struggle (even if maybe it’s not all their fault), or they rise through the ranks quickly at a network and then leave for “something better,” only to falter or simply fade away. Tinker wasn’t the smartest or most innovative guy atop a network, but he showed for two decades that surrounding yourself with really, really smart and creative people was an easy way to have success in the business.