In addition to a few scenes that are just plain hysterical, there’s a density to the plotting in “Who Owes Who What?” that makes it an even more impressive—though not necessarily funnier—achievement. Not being an expert on the other shows during and before this time period, I can’t say that Dick Van Dyke was the first sitcom to feature this level of complexity in its plots. I would guess that it probably was, but what really matters in this case is just how perfectly the episode manages to utilize tools such as callbacks and Chekov’s gun (tools shows like Arrested Development and Breaking Bad would later make even better use of) to make the story it tells even more interesting than it would have been otherwise. This is a script which displays an incredible level of tautness and efficiency. 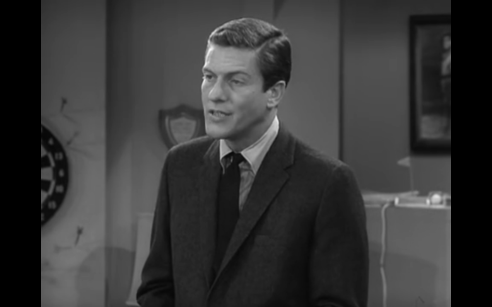 Okay, maybe I’m overdoing it. This is still a fairly conventional situation comedy, after all, and it has certain limitations on what it can do. You won’t see that many callbacks to previous episodes (although they do show up once in a while), or any real sort of foreshadowing of episodes and events down the road. Dick Van Dyke’s idea of a callback is having Rob and Laura get into debate about what his “shouting level” is, then having them get into another fight later on where Rob refers back to the argument which we saw just a few minutes ago. It’s pretty simple, actually, but no less elegant than anything the sitcoms of today’s TV world do on a consistent basis.

Or observe the way the episode casually has Mel mention an extra comedy sketch that needs to be written for this week’s show, and the role that sketch plays several later moments, including a truly terrible sketch written by Rob as a “hint” about the money Buddy owes him. This is in many ways the comic equivalent of the sort of thing Breaking Bad does quite frequently, although that show obviously goes about it in a far different (and it must be said, considerably more complicated and brilliant) fashion. So while it may not seem like there’s that much going on in “Who Owes Who What?”, there are actually a lot of interesting things happening.

Or course, none of that would matter if the episode’s larger comic set pieces were unsuccessful. Fortunately, they’re terrific, with the climactic sequence rivaling that of “Buddy, Can You Spare a Job?” in terms of sheer hilarity. And the episode as a whole is probably even funnier, featuring moment after moment that left me doubled over with laughter. The initial argument between Laura and Rob over the $25 Buddy apparently owes contains a number of memorable moments, most notably Rob missing the “punch of the century” twice in a matter of minutes. The material set in the office is even better, as Rob sets about trying to “remind” Buddy to pay him back (without knowing that he’s actually the one who owes Buddy).

But it’s the conclusion that is especially extraordinary. After Rob and Buddy correct the misunderstanding, Rob reminds Buddy that he owes him a dollar. In addition to being another great callback to a seemingly inconsequential detail (Rob lending Buddy the money to pay back Marge) from an earlier scene, it sets up a lengthy sequence in which the three writers exchange money, trying to work out a solution that will make all of them happy. It’s just beautifully written and incredibly disorientating, with money changing hands so frequently that we’re left with no clue which character has which amount until the very end, when Sally discovers that she’s somehow lost $11. It’s at this point that Rob realizes that this could be a great sketch, which inevitably leads to further confusion as they set about trying to recreate it. This show does these kinds of extended comic scenes better than any other TV comedy—with the possible exception of The Mary Tyler Moore Show during its later years—that I’ve had the pleasure of viewing, as I imagine you can clearly see upon watching “Who Owes Who What?” and “Buddy, Can You Spare a Job?”. 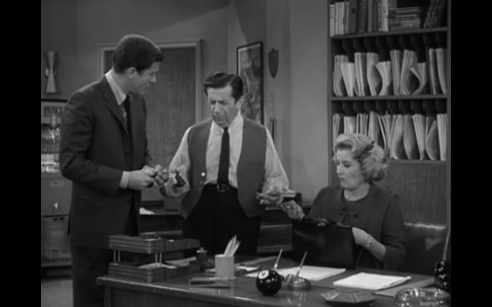 In addition to that, these last two installments—three if you count “Empress Carlotta’s Necklace“, although in my opinion that’s a slight step down from the other two—have shown just why Dick Van Dyke remains one of the greatest sitcoms ever made. They’re both perfectly structured, extremely smart, and consistently hilarious, which is pretty much all you can ask for from a television comedy. “Who Owes Who What?” is probably my favorite episode of the series so far, both for its sheer number of laughs per minute and for the intelligence of the humor. At this point, the show is doing pretty much everything right on a consistent basis, after occasionally struggling to string together two or more consecutive strong episodes during the first half of season one. As I’ve mentioned on more than one occasion, I’ve known that episodes of this quality were coming since day one. But I’m still incredibly excited that they’re finally here. Hopefully you are too.

– Rob doesn’t bother to wash his hands before taking over shredding the cabbage. Hope he enjoys the food-borne illness he’ll be suffering from later on! (What’s weird about this scene is that Laura makes a point of telling Richie to wash his hands, but doesn’t seem to care about Rob doing the same. All I know is that I wouldn’t want to eat a meal cooked by either one of them.)

– As a chess player, I found Rob jumping Jerry’s bishop (then trying to pretend like it’s an acceptable move in order to avoid appearing guilty to Laura) to be incredibly funny.

– Right after loaning Buddy the additional dollar, Rob remarks that “25 and one makes 26”, to which Sally responds: “How about that? I always wondered how much 25 and one were.”

Next Week: “Sol and the Sponsor”

5 Responses to “Review: The Dick Van Dyke Show, “Who Owes Who What?””