The sheer hilarity of “The Curious Thing About Women” is absolutely mind-blowing. I’ve given episodes like “Who Owes Who What?” and “Buddy, Can You Spare a Job?” quite a bit of praise, and they deserve every ounce of it. They’re brilliant. But this episode is much, much better. It’s probably the defining moment of this season, and one of the few episodes that I’d imagine people mostly unfamiliar with Dick Van Dyke are probably aware of. Laura trying to resist the temptation of opening Rob’s package—and what happens when she can finally hold out no longer—is among the most unforgettable scenes in the entire series. This is also the episode which gives us Millie and Jerry twice being completely overcome with laughter, the delightful and exhilarating scene of the three writers coming up with a sketch idea based on Laura and Rob’s argument earlier that day, and of course “I hate condensed mail for breakfast!” It’s an absolute masterpiece, which even on a classic show such as this doesn’t happen all that often.

The episode is such an awe-inspiring comedic powerhouse that I’m kind of at a loss for how to review it, so I think I’m going to try something a little different this week. I’m going to list the episode’s four major scenes, and briefly try to explain why they’re so incredible. Then I’ll switch back to the usual format in order to wrap things up at the end. Here we go:

Why It’s So Incredible: In this case, it’s pretty much all about the dialogue. The scene serves to set up pretty much everything else that will occur over the course of the episode. But unlike similar scenes from last week’s episode, it doesn’t skimp on the laughs. The repartee between Laura and Rob as they argue over her habit of opening and “condensing” his mail is just perfect, and Richie further adds to the scene’s hilarity when he asks the two whether or not they’re fighting. Upon being given the affirmative answer by Rob, he says that “Freddy’s Mommy and Daddy fight a lot better than you and Mommy.”

Some very funny sarcastic remarks are thrown around by both participants, but they make up after Laura agrees that Rob has a point. I think that’s another critical reason for the success of these first few minutes. While big blow-ups can be entertaining, watching two smart people (and people who have a great deal of respect for one another) spar with words has always struck me as far more satisfying to watch.

In any case, that should be the end of the issue, right? But then comes…

Why It’s So Incredible: This is arguably the most vivid and believable example I’ve ever seen of a show or movie capturing the excitement artists—and writers in particular—must feel when they come up with a new idea after days or weeks without anything. I highly doubt it depicts the way the majority of ideas evolve into longer comic bits, but that doesn’t really matter. What matters is that comes across so naturally and spontaneously, and that you can almost feel the energy of Sally, Buddy, and Rob as they develop Buddy’s initial concept into an actual sketch.

There’s also a physicality to the sequence that further draws you in, and credit for that belongs mostly to the actors. Look at how Sally almost immediately goes into attack mode after hearing Buddy’s glimmer of an idea: standing up and motioning with her arms. The other two characters seem to almost feed off of her initial energy, and she in turn does the same with theirs. They’re almost always moving: playing off of each other and acting out bits and pieces of the sketch with conviction and purpose, as though they’re in their own separate universe. The bits themselves are hilarious, but it’s the frenzied atmosphere (again, an atmosphere created mainly by the performances, although David Adler’s superb script lays the groundwork for it) that truly makes the sequence such a joy to behold.

Scene #3: Laura Watches the Sketch (and Doesn’t Like It)

Why It’s So Incredible: The main goal of scene #2 is of course to make us laugh as hard and as frequently as possible, but it also has an important effect on the following scene. As is typically the case with Dick Van Dyke (there may be a few exceptions to this rule, but I for one can’t think of any), we never see the screen when the characters are watching television. So when Laura, Millie, Jerry, and Richie gather to watch the sketch Laura “inspired,” the focus is not on the sketch but rather on the reactions of the characters to it. Having a chance to view part of the process of creating the bit results in a much greater understanding of what they’re seeing, and knowing how brilliant it is makes Millie’s and Jerry’s reactions—and the phone calls Laura receives, which inevitably devolves into hysterical laughter from the person on the other end of the line—all the funnier.

But the real fun starts when Rob gets home, eagerly anticipating Laura’s reaction only to discover that it’s not exactly what he was hoping for. She’s justifiably furious, particularly after getting all those calls from people who “never realized what a wildly funny, eccentric person” she was. And she shows it: verbally tearing into him using a combination of righteous anger and hilarious sarcasm in an extremely funny sequence. Rob’s few attempts to respond to this are wonderfully ineffective, such as disputing her claim that she was depicted as a “wild-eyed maniac” by saying, ” oh, now come on, she wasn’t wild-eyed”. Every line is sharp and witty, and the comic timing of both Van Dyke and Mary Tyler Moore is simply exemplary. 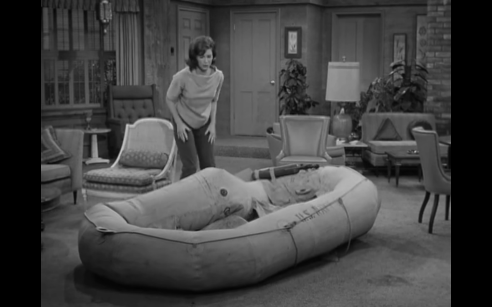 Scene #4: Laura and the Package

Why It’s So Incredible: It’s basically impossible to explain why this scene is so funny. The sight of Laura trying desperately to control a rapidly inflating boat is one of those classic comedy scenes—like the funeral in “Chuckles Bites the Dust,” to name the most famous example—that is hilarious for reasons beyond our comprehension. Sure, we can describe what the scene is doing, and what the overall effect of it is. But such descriptions don’t really get at the true reason it makes us laugh again and again, even after the surprise of the moment is long gone. All we know (and probably all we ever will know) is that it hits the brain in a way that makes the part of it responsible for laughter light up.

What I can comment on, however, is how brilliantly all of this is set up. Much in the same fashion as “Who Owes Who What?” does, “The Curious Thing About Women” introduces an element—in this case, the boat Rob mentions ordering—for one reason (it provides Rob inspiration for how to end the sketch), so that it can logically show up again later in the episode. Thanks to a course I’m currently enrolled in, I now know what this is called: motivation. And it’s this motivation that allows the scene to work so perfectly. The boat’s not there for no reason. If it were, none of this would make any sense. But if you’re like me the first time I saw it, you probably didn’t remember the boat until this very moment, because you were so focused on everything else that was going on in the episode. Again, this doesn’t explain why it remains funny even after you’ve seen it five or six times (which I’m pretty sure I have at this point), but it does show how brilliantly thought-out this entire episode is.

“The Curious Thing About Women” really doesn’t have a weak moment. These four scenes are all classic, and they make up almost the entire run time of the episode. But the few parts outside these four (such as the tag with Millie and Jerry) are pure gold as well. This truly is one of the most hilarious episodes of comedy television ever made. As I conclude this review, I’m faced with another dilemma: how to end it with a sentence that sums up just how amazing this episode really is. And after thinking it over, I really don’t think it can be done. Instead, I’ll just say that you need to see it, if you’re at all interested in great television comedy. There are episodes that are its equal, but not many.

– I guess scene #3 is technically two scenes (Laura watching the sketch followed by the fight with Rob), if you’re being really picky. But they take place so close together, and the second one is basically an extension of the first. So I grouped them together.

– Rob’s “condensed” version of Romeo and Juliet is actually a pretty good summary of the play: “A couple of mixed-up teenagers run away from home and end up dead.”

– Here’s Sally quoting her relatives again (this time it’s her Aunt Agnes): “If your heart is where the sky is bluest, then the sound of winter’s twilight will be your friend.” She says that remembering this saying makes her “want to cry.” Buddy asks her why, and she says, “Because I think my Aunt Agnes is a nut.”

Next Week: “Punch Thy Neighbor”

7 Responses to “Review: The Dick Van Dyke Show, “The Curious Thing About Women””