It’s impossible to grow up in Chicago in the 20th century, as I did, without at least glimpsing the legacy of Louis “Studs” Terkel, even if it’s only his vapor trails in your periphery. As beloved by his adopted hometown as any local media figure anywhere in America, the mononymous Studs was a broadcasting fixture for half a century, inducted into the National Radio Hall of Fame posthumously in 2009. He was a prolific author, oral historian, and champion of economic justice. He was a scene-stealing sportswriter in John Sayles’s 1988 film Eight Men Out.

He was also, briefly, a TV star.

Unless you’re a die-hard Studsologist, chances are you’ve never heard of Studs’ Place, a seriocomic half hour that aired on NBC in 1950 and on ABC in 1951. It isn’t especially exalted either in the annals of TV history or in Terkel’s considerable canon. That’s due more to its era and its brevity than to its quality. Broadcast television was far from an established medium in 1950; the networks barely had any reach west of the Mississippi River, and recording of programs (which generally aired live) wouldn’t become a common practice until later in the decade. No one today is certain how many episodes of Studs’ Place were produced, but until recently only ten were known to still exist.

That changed this summer, when Dan Terkel unearthed four 16mm kinescopes in his father’s basement. (An early method of TV recording, kinescopes were made by pointing a movie camera at a monitor airing the live broadcast.) These kinescopes contained four more installments of Studs’ Place, increasing the total archive by nearly 50%. Dan Terkel presented the discovery to Media Burn, a nonprofit dedicated to preserving and digitizing Chicago’s video patrimony. On September 5, Media Burn and its chair Tom Weinberg, a long-time friend of Studs Terkel, teamed with the recently opened Museum of Broadcast Communications in downtown Chicago to screen two of the “new” episodes for the first time in more than 60 years. 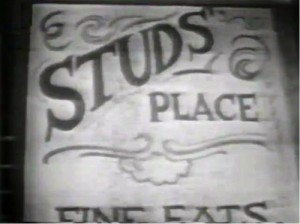 Studs’ Place operates in a context familiar to a TV viewer from any era: a tight-knit group of friends/co-workers gathered together in a home-away-from-home. The locale is the eponymous diner, run by a genial proprietor (Terkel) and supported by counter gal Grace (Beverly Younger), guitar-strumming Win (Win Stracke), and pianist Chet (Chet Roble). The show is suffused with the easy intimacy of a neighborhood greasy spoon or corner pub, written and shot with a sensibility that’s naturalistic almost to the point of nonchalance. The style reflected the tenets of what was then dubbed the Chicago School of Television, with an M.O. both relaxed and unpredictable. (Maybe the method’s most famous adherent was Dave Garroway,  the original host of NBC’s Today in the 1950s and early ’60s.)

The scripts for Studs’ Place, we’re told, are largely improvised—the end credits include the line “Dialogue by: The Cast.” The camera ambles and weaves through scenes, sometimes nudging its way into the proceedings as if it (and the viewer) were just another diner regular. At a time when TV audiences were still acclimating to a new medium that invited itself into your home, the makers of Studs’ Place reciprocate the dynamic, inviting you into theirs.

This amiability is captured neatly in the first thirty seconds of “Bowling,” one of the episodes screened at the MBC. Panning off a handmade title card which welcomes us to “Studs’ Place”—the show and the restaurant—the camera lands on Terkel and Roble staring straight at us. “How do you like the lettering?” Studs asks in his unmistakable brass section of a voice. “Hand-stitched.”

In the next moment it’s revealed that he’s not really breaking the fourth wall. He’s addressing Grace, standing behind him, about the name on the back of his newly-delivered bowling team shirt. It’s a wonderfully sly wink at the audience (a distant ancestor of gimmicks like “Troy and Abed in the Morning”), but also a functional one which gets the story rolling.

Many of the gags throughout “Bowling” would trip similar alarms of recognition in a TV veteran. The conflict hangs on two threads: In one, Studs and Chet have decided to replace Win on their bowling team with a better player, and fret over breaking the news to him gently; in the other, Studs learns to his horror that the big league match is on the same night as a dance he promised to attend with his wife. These stories are straight from the lesson plan of Sitcoms 101—but of course, in 1951, that lesson plan was still being sculpted.

“Bowling” executes it all deftly. Particularly funny is a bit where Studs calls his wife to break the bad news of his double-booking; while other characters enjoy a serene piano sing-along in the foreground, he’s framed in the phone booth in the background silently devolving into flop-sweat-drenched histrionics. The twin plot threads are tied together with wit and economy, pulling off a double-twist ending that makes Studs both the hero and the fool.

Studs’ Place isn’t exactly a sitcom (the category hardly existed yet), but it does exhibit many of that form’s strengths. This comes through most clearly in the star himself. He’s the archetypal protagonist who’s always getting mixed up in everyone else’s messes whether he likes it or not—a role that will be played down the road by Andy Taylor, Mary Richards, Sam Malone, Jeff Winger and many more. That’s certainly what happens to Studs in the other screened episode, “Teen Job,” although this is a much more dramatic than comic story.

In “Teen Job,” plucky young mop-hand Johnny reveals that his single, working mother doesn’t know he’s taken up employment at the diner. He implores the gang to keep his secret, because if she finds out she’ll force him to quit. Naturally, Johnny’s mom has gotten wind of this and arrives insisting that Studs fire the lad. She’s concerned that he’s growing up too quickly, leaping into the working world (as she had to at a young age, it’s implied). She’s also dubious about his reasons for needing the extra cash, convinced he’s got his eye on a “hot rod.”

Studs is torn between a promise to employ the young man and a promise to fire him. The drama that plays out takes both sides’ positions seriously, neither condescending to the teenager nor vilifying the overprotective parent. In the end Johnny reveals why he was so determined to keep the job: He didn’t want the money for a fancy car, he wanted it to surprise his overworked mother with a vacation to Miami.

The story contains a moral, but an unexpected one. Referring to mom’s earlier contention that “boys will be boys,” Studs observes that, “sometimes, boys will be men.” The moral in “Teen Job” isn’t an exercise in teaching, like many a heavy-handed “very special episode,” but in learning. The grown-ups here learn that this 17-year-old kid has more dimensions than they’d realized.

In this way Studs’ Place is of a piece with Terkel’s better-known professional output. The author of Working and Division Street: America was a curator of ordinary people’s stories. He dedicated much of his career to spotlighting the depth and dignity that everyone possesses simply by virtue of being human, young or old, blue collar or white. Speaking at a reunion party in 1989 to commemorate the show’s 40th anniversary, Terkel talked about receiving appreciative letters from viewers in all walks of life: “They recognized respect for their intelligence. The program never, ever played it down… Never, ever was there a cheap gag.” (Go to around the 35-minute mark in the clip.)

By some accounts, Terkel regarded his tenure on the small screen as little more than a lark. Rick Kogan, a senior writer for the Chicago Tribune and veteran WGN radio host who co-moderated the MBC screening with Weinberg, knew Terkel his entire life. “The last 15 years of Studs’s life, we spent an inordinate amount of time together,” he says. “This show didn’t come up in any conversations that we had. He didn’t get wistful about it. I remember asking him about it, [he said] ‘Great fun, great fun’—no more details than that.” Terkel’s many admirers apparently felt the same, Kogan adds: “No one, in my memory, out of the couple hundred events we did together, ever brought up Studs’ Place.”

Studs Terkel’s media legacy will always be defined by his print and radio work. Still, what he crafted along with the ensemble of Younger, Stracke, and Roble, creator/producer Charlie Andrews, and director Dan Petrie deserves to be remembered. Studs’ Place will never be thought of alongside I Love Lucy and The Honeymooners, any more than Studs’ Place would be mistaken for Charlie Trotter’s. What it should be remembered as is exactly what it was: a humble neighborhood stop that rewards anyone lucky enough to stumble upon it with good people, good food, and a dollop of Midwestern hospitality.

To view episodes available online, visit the Museum of Broadcast Communications archives (free registration required) or Media Burn and search “Studs’ Place.” Some of the newly discovered episodes, including “Bowling” and “Teen Job,” have not yet been uploaded as of this publishing, but will be coming soon.