For the past 39 years, one television character has been busy running a multi-billion dollar corporation, stealing the occasional baby, getting married and divorced and married and divorced again (and again), working through several bouts of alcoholism, helping her lookalike work through her alcoholism, partaking in a feud that has spanned nearly four decades, having facelifts, and accidentally on purpose killing at least one ex. That character is Katherine Chancellor, the matriarch of The Young and the Restless, one of the last American soap operas still standing.

As portrayed by the venerable stage and screen actress Jeanne Cooper, Katherine is one of the genre’s most iconic figures. Susan Lucci may hold the title of First Lady of daytime television, but Cooper is the reigning grande dame of the soap world. She was a powerhouse performer when she entered the fold back in 1973, and she remains one today on the rare occasion she is given material worthy of her considerable talents. Over the course of her career, she has received two Primetime Emmy nominations, 10 Daytime Emmy nominations (with one win in 2008), and a Lifetime Achievement Award. In 1993, she was rewarded for her contributions to television with a star on the Hollywood Walk of Fame—the first star to be awarded to a daytime actor.

When Cooper arrived on the scene, soap operas were at the height of their popularity. Historically, soap operas have been derided and dismissed by the mainstream, but during the genre’s heyday in the ‘70s and ‘80s, daytime serials were often more popular and culturally relevant than their primetime counterparts. Not only were they full of sex and adulterous affairs, they were also at the front lines of the changing mores in the country. They even landed on the cover of Time magazine in January 1976, in an article titled “Soap Operas: Sex and Suffering in the Afternoon.” Since then they’ve suffered serious audience erosion, but the one thing that has remained consistent—besides the set designs, that is—is that soaps are designed to attract female viewers and capitalize on their buying power.

For that reason they have always featured women in active roles. The idea that every afternoon soap fans sit down to watch the television equivalent of a bodice-ripping, damsels-in-distress romance novel isn’t accurate. Yes, occasionally a woman will get kidnapped and replaced by her arch-nemesis (who had shockingly convincing plastic surgery done) and need rescuing, but more often than not you’ll find characters like Katherine, who are allowed to be as messy and multifaceted as the male characters who rule primetime today.

That’s not to say misogyny and problematic gender issues don’t run rampant in the soap world, because they do, but soaps have always been more inclined than other genres to tell stories about women for women. Since the late ‘60s they have also been known for courting controversial storylines, and few characters have stirred up quite as much controversy as Katherine. In fact, that’s why she was introduced. 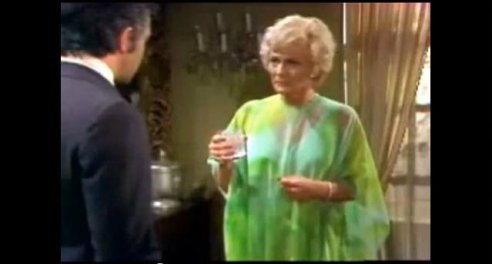 Creator William J. Bell conceived the character to spice up The Young and the Restless in its first year. The series was off to a slow start in the ratings, and in desperate need of a source of conflict. Katherine was introduced as a woman who wielded a considerable amount of power in the town of Genoa City. She had money, clout, and a business mogul for a husband. She was also an alcoholic. The dichotomy between her personal life and her private one was collapsing in on itself as her drinking spiraled out of control. In essence, she was the prototypical desperate housewife, possessing a vast amount of power and still feeling powerless. It’s no wonder that the character struck a chord with so many women—many of whom were struggling to take advantage of the benefits offered by the women’s liberation movement.

Cooper wasn’t Bell’s first choice for the role, but landing her for the series was still a coup. Cooper was never a household name, but she had worked with Hollywood heavyweights like Tony Curtis and Glenn Ford for years before coming to daytime, and as a result, she had cultivated a good reputation for herself within the industry. In her memoir Not Young, Still Restless, Cooper reveals that she was initially concerned that she wouldn’t be able to embody Katherine, but one monologue changed her mind. She writes:

Any concerns I might have had about finding common ground with Katherine Chancellor vanished with my very first monologue, a beautifully crafted explanation from Katherine to Phillip that what she wants—all she wants—is someone to love her just for who she is, nothing more, nothing less; someone to be a shoulder not for her to lean on from time to time but for her to count on… Which is to say that, no matter what soap opera craziness the writers had in store for her, I loved and understood the essence of Katherine Chancellor from the moment I stepped into her designer pumps.

The essence of Katherine is that she is a character seeking love, but she’s also a character unafraid of behaving badly. She’s an anti-hero every bit as daring and damaged as Mad Men‘s Don Draper or Breaking Bad‘s Walter White, but she was doing it way before it was cool. Her misdeeds include giving away her nemesis’s baby in a fit of jealousy and killing her ex, Phillip, who she drunkenly drove into a tree rather than see him marry another woman. After his death, she took over his corporation and began her reign as a competent, but ruthless, businesswoman.

She’s a trailblazer too. In 1984, at the age of 55, Cooper decided to have a facelift. She pitched to Bell the idea of having Katherine undergo the procedure as well. Her motivation was a desire to reduce the stigmas associated with plastic surgery. For her, it was a cosmetic procedure, but she saw it as one that could help her regain her sense of self. Bell agreed, and then together they decided to go one step further and film Cooper’s actual procedure, melding together fiction and reality for the sake of story.

The procedure was filmed documentary-style, and later when Cooper had her bandages removed the cameras were rolling. This was before reality TV had taken root, before you could turn on TLC and watch any number of crazy surgeries play out, and it was broadcast in the middle of the afternoon. Katherine’s and Cooper’s recoveries occurred simultaneously, playing out in real time before the eyes of a rapt viewing audience. For many viewers, watching the positive effect the procedure had on Katherine’s life was a liberating experience. In her memoir, Cooper shares that she was inundated with letters from fans, many of whom had been afraid of the procedure, who were emboldened by the frankness of the storyline.

Katherine’s ongoing struggle with alcoholism had a similar effect on fans: Her battle with addiction inspired some to seek treatment for their own issues, while giving others a character they could relate to. When Cooper struggled with her own bout of alcoholism, she channeled the strength of her character to help her deal with her own situation. Each time Katherine returned to the bottle, Cooper would warn her fans. The sense of responsibility she feels for her fanbase stems from the curious nature of soap operas open-ended nature. She is aware that people aren’t tuning in just once a week, but rather every day. After a couple of decades of this, it’s not surprising that some viewers consider the characters that populate their “stories” as extended family members.

What has defined the character’s legacy even more than the various social issues the series tackled through her is her relationships with other women. For nearly four decades now, Katherine has been locked in a feud with Jill Foster. Katherine first encountered Jill when she was a manicurist and the pair became friends, but their friendship soured when Jill slept with Phillip. Since then, the two women have loved and hated each other with a ferocity that has made for some seriously compelling television. 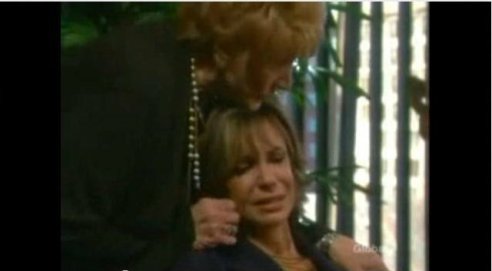 On the surface, the root of their conflict is a man, but beneath that is a betrayal of trust. Katherine saw—and still sees—Jill as a reflection of herself in many ways. Both women are fighters, both became formidable businesswomen, and they habitually fall for the same men. They are intrinsically connected no matter how many times they try to disentangle their lives. In the mid ‘90s, a quirk in Phillip’s will led Jill to lay claim to half of his estate, forcing the women to either be housemates or for one of them to relinquish her pride and move out. They decided to be housemates. A couple of mini-strokes and attic brawls aside, they’ve evolved into a pair of simpatico platonic life partners who occasionally try to kill each other. At one point, the writers misguidedly revealed that Jill was Katherine’s biological daughter, but they wisely retconned the connection a couple of years later. They no doubt realized that whatever exists between the duo is far more complicated than a mother/daughter dynamic could ever convey.

Katherine has an equally powerful relationship with Nikki Reed, the ex-stripper who married one of the town’s billionaires, Victor Newman (who incidentally owes much of his success to Katherine). Nikki and Katherine have been best friends since the ‘80s, and their friendship is one of the show’s strongest bedrocks. They have created a strong, positive support system for each other that has helped them both get through numerous divorces and falls off the wagon (Nikki is also an alcoholic). In a reality where the Bechdel Test is something that has to exist, Nikki and Katherine are a constant reminder of how easy it is to get female friendships right.

These days Katherine has settled down. She still runs her late husband’s business and engages in a scandal now and then, but her primary role is to play adviser to the younger characters on the show. She takes in random house guests and for a while, and has acted as the minister to every couple in town who decided to get hitched in the middle of the night. The lack of decent storylines for her reflects the growing irrelevancy of the genre itself.

Soap operas are quickly becoming extinct. The fans are aging, and as a result of fewer women being at home in the afternoons to introduce their kids to the world of soaps, new ones are no longer being added to the fold. Add in the strain of economic issues, a lack of challenging stories, increased entertainment choices for viewers, and networks’ growing savvy to the cost-effectiveness of ditching soaps in favor of much cheaper to produce talk shows, and it becomes clear that the end of the soap era is nigh.

In a moving farewell scene, Katherine once pleaded with her dying friend John Abbot to live. “You gotta fight, John; that’s the key to this whole damn life,” she said. “You’ve got to fight.” For the past 39 years that’s exactly what Katherine has done. She’s fought her own demons, fought for respect, for power, for men, and for love. She is a character who has existed on the margins of pop culture, but has been beloved by those in the know—much like soaps themselves. At this time only four soaps remain on American airwaves, but still Katherine Chancellor persists as a reminder of why soaps have mattered to generations of female and male viewers alike.

Previously on Women in The Box: Ellie Walker, The Andy Griffith Show

Sabienna is a freelance writer and regular contributor at TV Equals and Film Equals. You can find her previous work at Wit&Fancy. In case you’re curious, she happens to be a third generation soap watcher. Follow her on Twitter @sljbowman.

9 Responses to “Women in the Box: Katherine Chancellor, The Young and the Restless”