I love Dick Van Dyke‘s flashback episodes. If you’ve been reading these reviews since the beginning you know this, as it’s something I’ve talked about once before. If you haven’t, now you know that I think this show’s flashback episodes are almost universally extraordinary. There are a few exceptions, of course, but by and large the series tends to raise its game whenever it decides to do one of these types of episodes, for reasons unbeknownst to me. Maybe it has something to do with the fact that Carl Reiner—who both created the show and was its primary writer during the first two seasons—clearly knew the history of his characters, and perhaps had ambitions for the series that he couldn’t quite fulfill due to constraints on the kind of storytelling TV could do in this era. I’m just speculating here, but I get the feeling that with these episodes Reiner (and other writers who ventured into the Petries’ past over the years) was relishing his chance to add a little more depth to the show’s two main characters than was possible in most weeks. Episodes like “Where Did I Come From?” are as close as The Dick Van Dyke Show could get to developing any sort of history.

This is obviously not the same kind of television history we see today, where what happens in a given episode will typically play an important role in future installments of the show, or at the very least will subtly impact our perceptions of the show’s characters and world. The events of “Where Did I Come From?” may be mentioned a few times in passing (as has been the case with the “You Wonderful You” scene in “Oh How We Met the Night That We Danced”), but the show will never do anything more than that. Still, the pieces of history Reiner and company have created are simply wonderful. They’re also quite frequently hilarious, as Dick Van Dyke‘s writers also seem to have viewed these flashback episodes as an excuse to come up with some of their most inspired work. This too makes sense. After all, it’s not like these episodes are going to have a huge impact on the series. So why shouldn’t they go for broke with every single one? And so they usually did.

Like the season’s first flashback episode, “Where Did I Come From?” begins with the framing device of Laura and Rob telling a story to Richie. As you’d expect from the title, it’s about the days leading up to his birth. These could also be known as “the time Rob Petrie acted like a complete idiot,” as the initial flashback shows. Whereas Laura is completely calm, he’s terrified throughout. The result of this is, of course, consistent hilarity. Laura’s trying to relax and get some sleep, but Rob keeps interpreting everything she does as a sign the baby is coming. At one point she sighs, and he’s immediately asking her what the sigh meant. Dick Van Dyke is hilariously on edge throughout, and the design of the scene itself provides even more laughs when Laura knocks over the alarm clock. The noise causes Rob to shout “it’s time!”, spring out of bed, and reveal that he’s gone to bed with his clothes on. It takes a few moments for Laura to calm him down, and for us to stop laughing at how ridiculously Rob is behaving.

But that’s nothing compared to the glorious comedy that occurs when he goes to the office the next day wearing his wrinkled clothes. We’re already prepared to expect some chaotic events thanks to the framing device, and this scene doesn’t disappoint. It combines hysterical physical comedy, the show’s usual brilliant verbal humor, and (most importantly) a constant escalation of the level of jokes. Dick Van Dyke‘s best scenes tend to operate on the assumption that more is better, and this sequence just keeps adding element after element, to tremendously funny effect. Rob’s already a mess, having barely slept the night before. He’s also forgotten there’s a conference today, which he obviously can’t attend in his current attire. So Sally calls and asks someone to come pick up his clothes and press them. Then Willie shows up with his lunch cart, which takes up half the room. Suddenly there’s so much more going on, and much less space for it to happen in. It’s sort of the same principle as the classic stateroom scene in A Night at the Opera, only this episode doesn’t come close to carrying it to the same lengths as that film did. 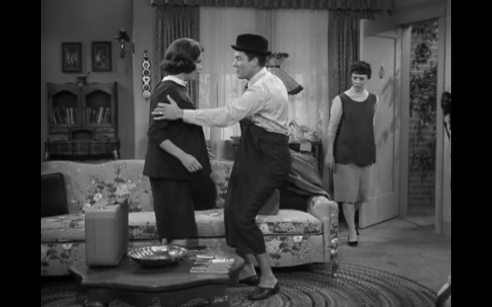 But it doesn’t need to, because the point here isn’t to carry this concept to the same absurd (and hilarious) extremes of A Night at the Opera, but rather to allow it to impact the jokes and contribute to the scene’s farcical nature. It directly contributes to some jokes, but its overall effect on tone of the scene is even more substantial. Willie also adds a great deal to the scene in the way he interacts with the other characters, in addition to getting a couple of brilliant individual lines. Add in Sally and Buddy being their usual hilarious selves (as well as Rob’s and Mel’s growing agitation), and you’ve got a scene where almost every line and physical gag lands, and where almost every single one manages to top the previous one with astounding frequency. Rob eventually gets the phone call we know is coming, and he almost rushes out of the office without his pants on.

The tone and rapid pace of the episode continues into its equally brilliant conclusion, which finds Rob still in panic mode: racing home so quickly that he collides with two other cars, including the taxi he asked Sally to call. After asking the police to come over (but in his haste neglecting to provide an address), Charlie shows up with his laundry truck: something that was mentioned briefly in the very first scene. We then return to Laura and Rob telling the story for one final scene designed to wrap things up, which it does quite well.

This isn’t the best episode of Dick Van Dyke’s first season, but it’s close. It also continues a trend of brilliant flashback episodes that will last throughout the show’s entire run. Any time the show uses one of those dissolve transitions to head back in time, you can usually rest assured that you’re about to see some amazing comedy.

Next Week: “The Boarder Incident”

2 Responses to “Review: The Dick Van Dyke Show, “Where Did I Come From?””