(Author’s note: Since the fourth series of Prime Suspect follows a different format than the other series—being split into three individual stories—we’re going to approach coverage in a different way as well and cover each one separately. First up, “The Lost Child.”)

If you had to choose one adjective to describe Prime Suspect, it’s pretty obvious that words like “light-hearted,” “optimistic,” and “good-natured” wouldn’t even enter in your first hundred choices. Prime Suspect, on the whole, is a very dark show, one where the cases in question are of a horrific nature and the objective of Jane Tennison and her team isn’t to save the lives but to obtain justice for the victims. It never wallows in its misery like some other programs do, but there’s a very cold center to the show, one enhanced by the spartan nature of its presentation and the clinical sense of distance that Helen Mirren brings to the character of Tennison, who even when she acts empathetic is doing so because she sees that as her best tactic to get information.

“The Lost Child,” the first of the “mini-cases” in the fourth series, doesn’t change that track record at all. If anything, it may well be the darkest installment of the series so far, because for the first time the case seems to be one where there’s a slim chance to save the victim—a 15-month old baby, the most helpless victim featured yet—and the failure to do so permeates the second half of the show with an increased despair. And even more than earlier installments, you can see that the nature of the cases investigated by this department are starting to take a toll on the detectives that investigate them, even the almost unflappable Tennison.

And with a case like this one, it’s no surprise that emotions are running high. Young mother Susan Covington is found in her small London apartment with her head practically bashed in, and her infant daughter Vicki vanished from her crib. With Susan obviously not a rich woman, the investigation gradually moves from ransom demands to more unholy reasons for kidnapping, and the detectives broaden their search to suspects with child molestation charges on their record. Suspicion falls on one Christopher Hughes, convicted of molesting his stepdaughter, seen in the same neighborhood and with an alibi that’s sketchy at best. However, Hughes does still have an alibi—and more to the point, an apparently reformed life with a single mother and her two daughters.

I’ve talked before about the influences Prime Suspect has had on other police procedural dramas, but this is the first time you can see where its storylines were blatantly copied by those shows. Unsurprisingly the American version of Prime Suspect is the obvious example, as at least two of its episodes borrowed heavily from “The Lost Child”: “Carnivorous Sheep” takes the idea of a detective so disgusted by a supposedly reformed pedophile that he sabotages that person’s life by leaking confidential information, and “Wednesday’s Child” takes the climactic reveal that the grieving mother at the center of the investigation may be weeping less out of loss and more out of guilt. Law and Order: SVU has done several variations on supposedly reformed pedophiles over the years, and I’ve seen elements of both scattered throughout such procedurals as Cold Case and Criminal Minds.

And based on the execution here, it’s easy to see why the idea has been so heavily borrowed and modified over the years. One of the most clever things Prime Suspect does is to split time between the police and the suspect(s) without ever formally establishing the latter’s guilt, meaning that the time of the investigation can seem like a false lead the longer the investigation goes on. Here, the technique’s used not just to stress out the detectives but also Hughes himself, a mounting desperation as they dig into his record and ramp up the pressure around both his work and his girlfriend. The fear of being sent back to prison—a fear that Hughes’s therapist Dr. Schofield* had explained to Tennison earlier—escalates into a full-blown hostage situation,** turning the police into the indirect impetus for the sort of crime they’re working so hard to prevent.

*Played by Stuart Wilson, Dr. Schofield offers a new factor to Tennison’s interrogations as someone who’s willing to respond with logic and wit, rather than the stubbornness or agitation. Example: “Given the seriousness of our case, would you help us build a profile of our abductor?” “No, but only because it’s so serious.”

**Also worth noting, the sniper shot that throws Hughes into a frenzy is the first bullet fired in the entire series to date, a detail that’s a testament for just how much Prime Suspect values the psychological aspect of policework rather than the action.

“The Lost Child” also earns points for not taking the most obvious emotional twist in regards to Tennison’s personal life. The series picks up almost immediately after Prime Suspect 3, with our first glimpse of Tennison staring blankly at her alarm clock on the day of the abortion we witnessed her schedule, and then later in the hospital afterwards where her first question to the doctor is “When can I get back to work?” When she returns to the office, I was worried it would play up her emotional vulnerability in the face of such a traumatic event, a move which might veer into exploitative territory the series has to date been so good at avoiding. Instead, her transition is seamless from the Tennison we know and respect, removing her Detective Superintendent predecessor’s nameplate with a triumphant whisk and getting back to interrogating with the same aplomb that’s seen her close many cases. 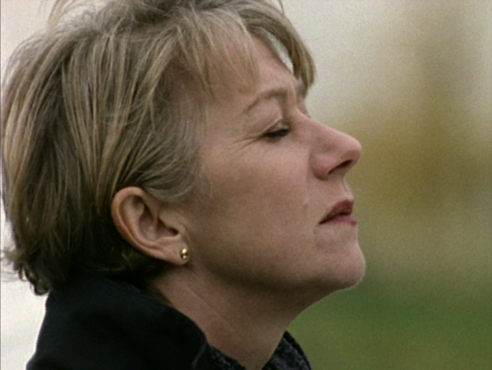 This isn’t to indicate that the decision she made is taken lightly however; several loaded moments throughout the series indicate it’s burrowed into her brain—lingering over pictures of Vicki in the case folder, visiting the nursery late at night, empathizing with Susan over the apparent insurmountability of raising a child alone. But Mirren never gives any indication that Tennison’s own circumstances are coloring the way she’s investigating the case. If anything, she’s using them to her advantage, as once again it’s that calculated empathy that leads her to coax the truth from Susan. When Tennison does seem to crack, it’s more due to rage at failing to solve the case rather than displaced remorse at her own choices, as her “pep talk” to the squad midway through the investigation conveys: “If they need incentive they can go to Oscar Breen and see what he’s got lying on his slab!”*

*Certainly Tennison’s most emotional moment in the episode, though her most caustic one comes when she’s pleading with her superior DCS Kernan for more support. Kernan: “If it turns into a homicide I can let you have another six men.” Tennison: “And what are they supposed to be, pallbearers?”

Even though Lynda La Plante isn’t crafting Tennison’s words this time (“The Lost Child” is written by Paul Billing), both Mirren and the show’s creative team understand what makes this character fascinating. Tennison’s simultaneous strength and flaw is how much she pushes her emotions and her femininity to the side in pursuit of solving the case—and how the toll it takes on her is isn’t an explosive rage but quiet numbness, leaving her thinking indecipherable thoughts in the quiet moments. 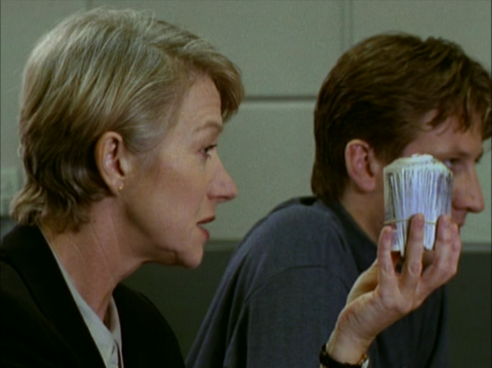 Finally, what “The Lost Child” does particularly well is to expand the case world beyond Tennison and the suspect in question. As I said last time, the subplots of Prime Suspect 3—Detective Hebdon coming out of the closet or Detective Dalton warring with the realization he might have AIDS—were well-performed but lacked import because that was the first time we’d met the detectives in question. Here by contrast, there’s a sense of familiarity now that Tennison’s back to the homicide squad room, with several detectives from the first three series playing a key role in the investigation. DI Richard Haskons (Richard Hawley), DI Tony Muddyman (Jack Ellis), and WPC Maureen Havers (Mossie Smith) have appeared off and on throughout the last three series, and it creates a solid sense of continuity to see all three chipping into the investigation.

The continuity also gives DI Muddyman his first real storyline beyond simply being one of the cogs in the Homicide machine. Even more than the other investigators, he’s actively disgusted by the circumstances of the crime—angrily muttering “castration” to Schofield when he says there’s no cure for men like Hughes, and storming out when the doctor shows them Hughes’s therapy tapes. And that disgust drives him to poke holes in Hughes’s alibi, and drive the final few nails into his efforts to be normal, delivering those tapes to Hughes’s unsuspecting girlfriend and indirectly triggering the hostage situation. Certainly it’s not the first time that one of Tennison’s squad has interfered with her casework—Bill Oatley’s a monument to that—but this is the first time someone’s directly compromised her case, and it brings out a rage that Mirren makes a joy to behold.

But the fact that it’s an irrational decision is what makes it all the more emotional when Muddyman suddenly collapses, cornered in a holding cell, emitting a primal keening as he collapses in on himself to mutter “I’m disgusting” over and over—a raw, poignant piece of acting from Jack Ellis. Tennison’s moment of realization once it dawns on her just why he took this case so personally is the most unguarded we’ve seen her, even more so than when she’s just left the hospital, and it conveys even more effectively the full horror of the world these detectives find themselves in. And as much as she’d like to pretend otherwise, when faced with circumstances like “The Lost Child” delivers, not even Jane Tennison is immune.

Les Chappell is one of the founders of This Was Television, a freelance writer for The A.V. Club’s TV Club and  founder of the television blog A Helpless Compiler and the literature blog The Lesser of Two Equals. You can follow him on Twitter @lesismore9o9.