I imagine that at one point or another we’ve all been in the position of Laura and Rob in “The Boarder Incident,” in which we’ve found ourselves sharing a space with people whose sleep schedules and noise levels (to name but two things that might cause conflict) are not the same as ours. In my case, it’s currently a dorm room with paper-thin walls and people on the same floor who usually like to stay up much later than me. They’re all pretty nice about taking their conversations elsewhere when I’m trying to sleep, but it’s still an issue occasionally. Before that, I spent 18 years living with a few people who—though I love them all dearly—frequently drove me up the walls: my family. So whoever and wherever you are, you can almost certainly relate to this episode. Its strength as a piece of TV comedy is in the way it takes a common situation faced by many, exaggerates it a bit, and turns it into both something that makes us laugh and something we can nod our heads at while we’re laughing.

This proves to be important, as the episode contains only one truly magnificent comic set-piece, compared to the three or four that have characterized—and will continue to characterize—the show’s very best episodes. But it mostly makes up for it with a fairly large amount of funny individual jokes and moments, most of which relate to the issues caused by Buddy coming to stay at Laura and Rob’s house while his wife Pickles is away. Sally tries to warn Buddy and Rob about the foolishness of this decision, but they don’t listen. And initially it seems like it’s going to work out just fine, even after Buddy accidentally causes a bunch of fancy dishes to be dropped. However, problems ensue when Laura and Rob attempt to go to sleep, but are kept up first by Buddy playing the cello to get his dog Larry (who we met in an earlier episode) to calm down, and then by his gargling. Eventually they give up and decide to play cards.

It’s all pretty funny, but the best part of “The Boarder Incident” occurs in the following scene, which initially seems to be taking place the next morning. We soon discover that it’s actually been several days, and that Laura and Rob are at the end of their rope due to things such as sleep deprivation, the annoyance of reading a chewed up newspaper, and Buddy’s love of liver and bananas. Here the episode has keyed in on an interesting aspect of human nature: our hatred of confrontation, particularly with our friends and/or people we see every day. The couple has been putting up with this for multiple days at this point, and they’re still reluctant to say anything. But we all have a breaking point. Mine is typically an hour after I go to bed, after which I will get up and ask that the people talking close their door or move somewhere else. Again, it’s not that they ever refuse or are mean about it, but I just hate to have to ask. Laura and Rob apparently hate it even more, but they too have a breaking point, and it turns out to be Buddy’s attempt to make eggs Benedict. 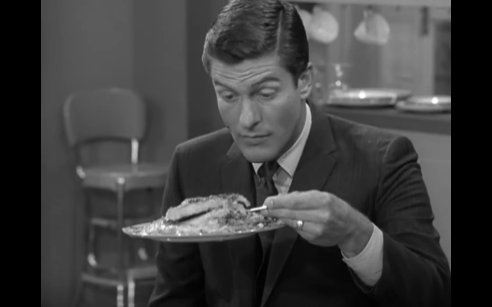 The eggs Benedict sequence is the great set-piece I was referring to above. In addition to the beautifully staged comic chaos that is the hallmark of many of Dick Van Dyke‘s funniest moments, it’s also an exercise in brilliant timing on both the part of the actors and writers. It begins, of course, with Buddy rejecting each of Laura’s suggested methods of making eggs. What makes this so funny is the way he’s initially fine with every single one, before making a casual remark (like mentioning how he was “forced” to eat soft-boiled eggs by his mother) at the last second that causes Laura to suggest a new one. This goes on for a few moments before Rob mentions eggs Benedict, which Buddy promptly agrees to. After Laura says she doesn’t know how to make that, he offers to do it himself. He then proceeds to trash the kitchen, all the while asking Laura and Rob for new ingredients just as they’re sitting down, and winds up making a meal that’s completely inedible. My favorite moment in the entire episode is probably the shot of the mess the three of them have left in the kitchen, which then pans over to the table where they silently consider the unappetizing concoction Buddy has cooked. It’s quietly hilarious.

Inevitably things get resolved, although a few more laughs are provided when Rob unintentionally talks Buddy (who’s begun to realize that he doesn’t like living with Laura and Rob, either) into staying, only to be bailed out when Buddy learns that Pickles is coming home. Of course, the tag scene shows Laura and Rob discovering that the house is suddenly now a little too quiet, which leads to them pulling out the deck of cards again. Some days you just can’t win, apparently.