Editor’s note: Jessica’s computer ate her entry, and she’s abstaining for the week.

Noel: I haven’t seen a single episode of Kolchak before watching “The Knightly Murders,” and I found myself generally enjoying it. As someone who thrives on a well-honed procedural, this supernatural one shows the genre at its most distilled. There’s no romantic subplots, and no other mysteries for Kolchak to investigate. There’s just this case of a suit of armor going around and killing people with medieval weapons, and a determined reporter who is smarter than everyone trying to piece it all together. It’s like my catnip. 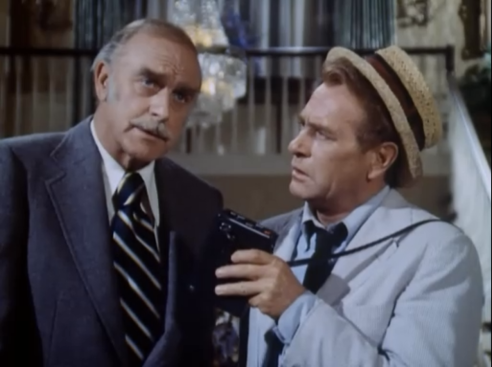 A big part of the show’s draw, apart from its procedural twists, is the quirky humor and banter (I love the interplay between Darren McGavin and John Dehner’s Rausch). It’s also a lighter film noir, really, despite the fact that the supernatural elements would lend themselves to an abundance of canted angles, chiaroscuro lighting, and (most noticeably missing) being filmed in black and white. But that none of those elements are here gives the episode a displaced vibe: It’s not stylized enough to feel totally disconnected from reality, which may be one of its strengths.

But it also sort of cuts down on the creepy factor. “The Knightly Murders” never feels particularly scary or suspenseful when it’s supposed to,  but it also never hits a level of camp that would provide an alternative pleasure. And while I’m fine with ambiguous endings, there’s little logic behind the spirit of the knight disappearing after Kolchak knocks it down with that massive battle axe, and so the episode kind of ends on a flat note for me despite my overall enjoyment.

Andy: I also don’t think this show hit the level of camp, but I’m not sure it was for lack of trying. Nearly all of the non-supernatural elements struck me as completely goofy, with cartoonish characters—the officious detective, the incredulous butler, the vapid socialite—being played to the rafters by guest actors who range from mediocre to lousy. Kolchak’s voiceover is sharply written with a satisfying postmodern-noir affect, but the rest of the dialogue is clunky and aimless (sample exchange: “Is your dishwasher broken?” “Oh, who knows? Friday night, party night!”). The attempts at an intentionally comic tone left me irritated. 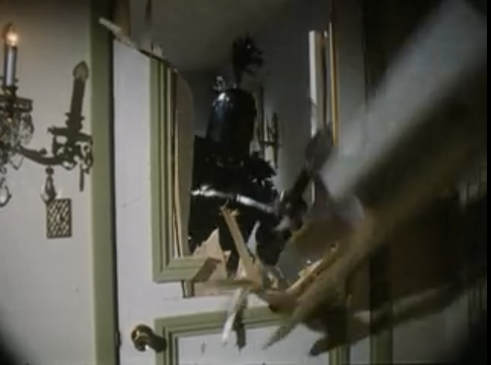 All of this undercut any suspense or creepiness of the (otherwise pretty cool) scenes wherein a dude in full plate armor (+35 Defense) offs folks with pikes (+18 Attack) and morningstars (+22 Attack). These parts, the actual horror elements of what’s ostensibly a horror show, were brief and far between, and not well-balanced with zany procedural going on around them. I don’t know if comic-horror was the general goal of Kolchak, but either way it doesn’t have the chops to pull it off, based on this episode. This ain’t Evil Dead 2; this ain’t even Abbott and Costello Meet Frankenstein.

Like you, Noel, this was my first experience with Kolchak, and it was one of the rare times I can remember a TV show being absolutely nothing like I expected. Based on the title and some of the episode summaries we read, I figured this was a straight-up horror series centered on a brooding, tough-guy hero fighting evil. That couldn’t describe McGavin’s Kolchak any less—he’s a Jack Lemmonesque figure in a straw boater, sometimes slick, sometimes stumbling. You can see the influence of Columbo on the character, appearing to operate one step behind everyone when he’s really one step ahead. Yet unlike Lt. Columbo, Kolchak’s bumbling, like when he futzes repeatedly with his tape recorder in an early scene, seems at least partially authentic. McGavin’s actually quite good in the role and was easily the most enjoyable part of the episode—aside from the parts where shit gets smashed with a mace.

J.: I’ll say that “The Knightly Murders” leans a little heavier on the humor side than other episodes in the series. That said, Kolchak—and Kolchak—has a rather matter-of-fact approach to the supernatural elements that I find oddly compelling. I first heard of the show when Chris Carter explained it was his chief influence in creating The X-Files, but the two series are radically different: the latter is much more interested in atmosphere and mood, while Kolchak could be investigating just about any kind of everyday crimes with his dry approach. (ABC tried to reboot the series in 2005, turning Kolchak into a much younger, much more brooding figure with a tragic past, and the results were disastrous.) 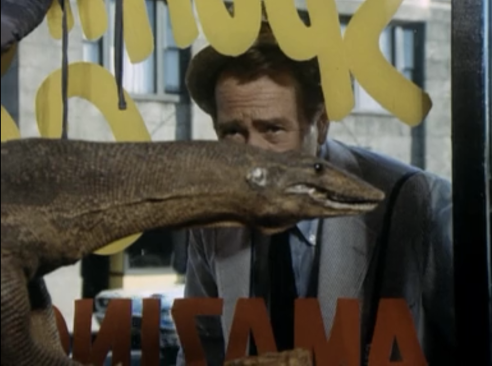 Though you’re correct in citing McGavin’s performance as the chief highlight of the series, what I enjoy most about “The Knightly Murders” is the implication that the murderous suit of armor is actually not that odd, considering the goofballs Kolchak spends most of his time with. From the daffy police captain to the self-serious medieval expert, from the interior decorator who wants to build a Camelot-themed disco to the weapons dealer who forces Kolchak to listen to excerpts from his autobiography as payment, the Chicago of Kolchak is so bizarre that the killer spirit barely registers as a blip on Kolchak’s radar.

Les: After two weeks of legitimately unsettling psychological drama, it’s almost a relief to get into something that’s enjoys more of a lighthearted tone, even if that meant I didn’t find a single moment of it too particularly frightening or even unsettling. This was my first trip through Kolchak as well, and it was also nothing like I was expecting, coming across as more of a straightforward mystery with a twist at the end than it did something more overtly creepy. Kolchak’s efforts to fight off the knight never had any sort of weight to them, and came across as poorly staged—even though that was the likely intent for a character who’s a bit of a bumbler. And this is almost certainly my inner Tom Servo kicking in, but every time the black knight came on screen, I was waiting for a “None shall pass!” or “‘Tis but a scratch” to emanate from behind his visor.

But the episode not being terribly scary didn’t detract from my enjoyment of it. This may be owing to the fact that I have a journalism degree, but I really enjoyed seeing a procedural that’s centered around a reporter rather than a police officer or a lawyer, someone who’s chasing down the truth because his job isn’t to see justice done but to get a good story out of it. And as everyone’s said before, McGavin’s really quite good in this role, someone who’s shrewd enough to get to the facts and find his way around difficult scenarios, while at the same time still being fallible enough that he’s forced to buy a $60 walnut plaque for his family crest or left stumbling over the name of “Hawk’s” fraternity. I enjoyed watching him put the pieces together, finding somewhat unorthodox solutions and willing to embrace the most illogical of logical conclusions, and in the very last moment of the episode acknowledging that while he’ll never explain what happened fully, it’s the truth and he’s sticking to it. Damn fine newsman.

Andy, you said that the episode’s dialogue left you cold, which I can understand, but at the same time there’s a certain cadence to the language that I found surprisingly endearing. Looking at my notes, I found myself jotting down a lot of phrases where I simply enjoyed the way sentences were put together, not just from Kolchak: “The sort one gets excited over and stores in his mental trousseau.” “An oversized arrow and an obese icepick.” You are going to be replaced by a Boston fern, and you a snapdragon!” “In short, I believe your brain has turned to onion dip.” There’s a quirky, almost Lynchian style to the way these characters talk, and if I go back to watch more episodes it’s going to be the language that draws me in.

(Fun fact: I noticed that the teleplay on the episode was done in part by The Sopranos creator David Chase, as Kolchak was evidently his first serious job in the business. Wonderful where people come from, as Reverend Smith would put it.)

As a reminder, we’ll be wrapping up the spooky show roundtable next week on 10/25 with Night Gallery, “The Phantom Farmhouse”/”Silent Snow, Secret Snow” (Season 2, episode 5); available through Hulu.