The concept of synergy is the idea that the sum of a system’s parts is greater than its whole. In business, this often means making sure that all roads lead back to the company. Synergy as a business model was one of Michael Eisner’s most consistent ideas; it cropped up again and again throughout his run as CEO of The Walt Disney Company, and following the Lizzie McGuire/Hannah Montana model, it continues to inform how the Disney Channel does business. Following the death of Frank Wells in 1994, Eisner became even more fervently committed to the idea of synergy, which spilled into his vision for The Walt Disney Company on television. (Witness, for example, the above video, where Eisner introduces the Disney Sunday Movie for “Winnie the Pooh and the Honey Tree” while the Disneyland actors dressed as Pooh and friends surround him. He’s simultaneously selling Disneyland tickets while introducing a television airing of a Disney classic—pure business synergy.)

On So Weird, synergy manifested in a couple of ways. Last week’s “Drive” began Clu’s road to college, which was simultaneously a way to keep reality in check on the show (as Clu is older than both Jack and Fi, it would be weird for him to be home-schooled through his college years) and a way for Disney to continue pushing Erik von Detten as a Disney star, a process that began in 1995. That year, von Detten was in two major Disney films: he played twin brother Danny in Escape to Witch Mountain, and he gave the vicious Sid his voice for the breakthrough Disney/Pixar film Toy Story. In 1997, he continued doing voice work, both as Erwin Lawson in the ABC animated series Recess (Disney had acquired ABC in 1996) and as additional voices for the Disney animated feature film Hercules. (The less said about the attempted film remake of Leave it to Beaver, the better.) The following year, he burst onto the Disney Channel scene as lead character Andy “Brink” Brinker in the Disney Channel Original Movie Brink! before snagging regular roles on both So Weird and Odd Man Out (the latter of which only ran for 13 episodes). 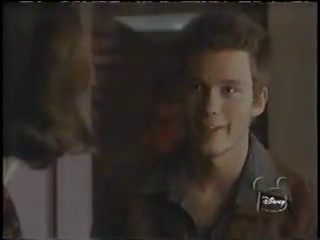 So von Detten was clearly an asset to Disney, hence why he would have been an appealing choice to play Josh Bryant, the surfer boy Mia Thermopolis is initially in love with in what should have been von Detten’s breakout film, The Princess Diaries. Production for that film, combined with von Detten’s apparent star appeal, made him less available for So Weird. In response, the show started seeding in an older brother, Carey, who could be pulled in to replace Clu in the Bell family triangle on short notice. “Siren” is a transitional episode for this process; it’s one of the few to feature both Bell brothers in the same episode, although it turns out to be a less-than-stellar introduction to Carey, played by Eric Lively. If one’s first impression of Carey came from “Siren,” one would think he was an everyman (or as he might put it, “everymanboy”) with no real distinguishing qualities. It’s a start to paint him like that to contrast with Clu, the perpetually chill surfer-dude with a Hakuna-Matata approach to life. But he needs more shades before he can be considered a character, much less a solid replacement for the lovable Clu.

Part of the blame for his blandness does lie with the episode itself, though, particularly as it pertains to a second expression of synergy within the series. Today, Jewel Staite is best known for her roles in genre series such as Firefly, Stargate Atlantis, and Wonderfalls. In the late ’90s, though, she was all over the children’s television networks, appearing on Space Cases on Nickelodeon and making two appearances on Are You Afraid of the Dark? She also played the lead role of Becca Fisher on Disney Channel’s first, short-lived attempt at original programming, Flash Forward. Having her guest star on a Disney Channel series slightly later, when the channel was more properly on its feet, made sense; having her guest on genre show So Weird is practically prophetic, given the role she would be offered a couple of years later by a creative upstart named Joss Whedon. But here, her role as a Siren who enchants all the men at a local club, including Carey, smothers any attempts to develop Carey beyond superficial details.

It’s most interesting that this episode is in some ways a reaction against shady business deals, which plagued the post-Wells years of Eisner’s reign as CEO of Disney. Fi’s opening narration of “Siren” is attracted to the notion of having the power to bring men under her spell, but the episode presents Staite’s Callie as being entirely unhappy with her current position. “Siren” is a surprisingly robust episode in that it again uses Buffyesque storytelling to effectively engage viewer interest: while Fi and Carey are primarily wrapped up in the paranormal aspects (Carey’s apparently a romantic, which catches Callie’s attention even as she knows his behavior is partly due to her song), the adults get their own interest in Callie through her manager, Evelyn. The history between Molly, the Bells, and Evelyn is never made explicit, but Molly explains that what she sees in Callie is herself, 20 years ago, just starting out in the music business and being played like a puppet by hungry managers like Evelyn. It’s no accident she chooses to play “Rebecca” when she replaces Callie at the gig; the two women share the pain of experience that comes with being betrayed.

Callie, meanwhile, is intending to use Carey’s romanticism to help her escape from Evelyn. Fiona is begrudgingly willing to help them once Callie explains, but she more readily jumps at returning to the club where Callie is playing when she explains that she left her instrument (some variation of lute) there: “It was a gift from my father, it’s the only thing I have left of him.” Even in a relatively tense and dense episode, “Siren” never forgets Fi’s driving purpose, and given Rick Phillips’s heightened importance this season—as previously established in “Medium” and “Drive”—it’s a significant detail to retain between episodes.

At the club, it is revealed that Evelyn was using her knowledge of Callie’s true identity (that of a Siren, and an immigrated Siren to boot, seeing as she’s originally from a small town near the Mediterranean Sea) to force her to play music, and ultimately to make Evelyn a star by virtue of being Callie’s manager. There was no physical contract, which is how Molly ultimately sets Callie free (in more ways than one, as Callie disappears during the conversation). Aside from the history with Molly, which pretty much establishes that she’s always been power-hungry, Evelyn doesn’t get much more depth. But her actions—using someone’s identity as a means of enslaving them—is particularly cognizant of the direction So Weird‘s second season is beginning to take. Carey learns from Clu that Fi’s “into all this weird stuff,” but Carey can’t even begin to know how far Fi is willing to go for her beliefs. And neither of them knows what lies ahead as The Molly Phillips Band prepares to go back on tour to properly relaunch Molly’s career.

Of course, synergy isn’t just a business idea. It represents the notion that the sum total of people working together is greater than that of people working alone and isolated. The Phillips family are about to learn the true meaning of this concept the hard way.

Cameron White is a freelance writer currently residing in Arkansas. He writes about television over on his blog, Wayward Television, and tweets about squirrels. His obsession with television was founded in 1996 by The Disney Channel and fostered by his discovery of Firefly in the summer of 2007. He is NOT a freaky fish guy.

Leave a Reply to Review: So Weird, “Nightmare” « This Was Television Cancel reply