Programming note: Jessica bowed out this week . We assume it’s because she lost herself in a world of sunny beaches and oceanfront tranquility.

Noel: Two interesting stories bring an end to our spooky roundtable on this month (which has been delightful, I think). Rod Serling’s Night Gallery, the NBC follow-up to The Twilight Zone, has a similar format to it predecessor, with Serling as a host introducing stories of the horrific and fantastic. Here, we have a story of werewolves terrorizing the grounds near a sanatorium and then a story about a boy who slowly withdraws into a world of snow.

“Silent Snow, Secret Snow” is, for me, the more interesting of the two. “The Phantom Farmhouse” is too neat, too dull. Even if David McCallum (Ducky from NCIS!!) and Linda Marsh are both oddly captivating as a couple despite their limited screen time, the segment just doesn’t go anywhere interesting to me. It even has stereotypical, superstitious European “peasants” nearby who insist on McCallum’s character taking a pure silver crucifix for safety. There’s not even much horror in it, really, save for McCallum’s “fight” with the wolves.

But “Silent Snow, Secret Snow” is completely captivating. Part of this, of course, is Orson Welles’ melodious narration, but there’s just a range of avenues in working through this short story. Is Paul going deaf, as was my first thought? No. Is he being possessed by some sort of demon? No. He is instead just steadily retreating from the natural world. But why? Is he sick of corruption? Snow is one of those symbols of cleanliness and purity, so is he retreating to a world that is clean? Is that what drives him to declare that he hates his mother? What did you all think?

J.: For me, it feels like what Paul is looking for is tranquility and peace, not so much cleanliness and purity. He first experiences the snow when it muffles the loud footsteps of the mailman; he later envisions it softening all the noises around him. I think he’s retreating from a hostile, noisy world he doesn’t understand. Of course, the narration puts a kink in that interpretation, since the snow seems to have an actual voice, like some sort of meteorological Tyler Durden. It may be tranquil, but Welles’s voice gives it the lure of a icy predator. Oh, and what of the scene where he returns home and sees himself in the window above? Is that symbolic of him splitting from his old life? Man, it makes my head spin.

The easy answer is that Paul is having a genuine mental breakdown—that he’s schizophrenic, and the snow and the voice are just the onset of hallucinations and a separation from reality. But that’s too simple; it’s far more compelling for me to think that he’s retreating from an angry world of mocking classmates, overbearing teachers, and clueless parents.

But, in addition to all of that, I thought that “Silent Snow” was really, really creepy, far more so than anything we’ve watched so far. The tight, intrusive camera angles and nonlinear editing gave the entire piece a detached, off-kilter feel that wouldn’t feel out of place in a David Lynch movie. Add to that the gorgeous narration—which I assume is text from the short story, which I’ve never read, but Welles transforms into something extraordinary.

(But holy cats, “The Phantom Farmhouse” is just awful. Reminded me of the Mystery Science Theater 3000 episode where they ripped into The Touch of Satan, a similarly turgid, oh-so-70s horror tale.)

I had initially thought “Farmhouse” was going to turn into a weird psychological exercise—the beginning, with a diverse group of people gathered on a series of asymmetric perches, had me expecting to find out they were all some sort of Jungian manifestations of one person’s psyche. The windy pacing, mannered performances, and unexplained creepy details (Gideon smashing the guitar, the old woman’s stained hands) gave the story an initial tinge of the surreal. But then it settled into a conventional werewolf story, the pacing became more plodding than interesting, and I was just running out the clock.

If there’s one potentially thoughtful aspect of the tale though, it’s the gender politics. It’s hard to tell whether the show is making a commentary or simply entrenched in this attitude, but there’s some pretty awful misogyny happening here. First, McCallum’s protagonist, Joel, tells temptress/lycanthrope Mildred that he likes her because she’s “gentle” and “shy,” unlike other “girls these days.” (These days being the midst of the sexual revolution, of course.)

By itself that’s not much more than a sign of Joel’s retrograde attitude. But then Betty, the young woman in his therapy group, is murdered by wolves after being delivered to them by Carradine’s Gideon, who is established as a “warlock” in their service. He finds nummy human meals and serves them up to Mildred and her kin—he’s the Silver Surfer to Mildred’s Galactus, basically—and then he calmly admits all this to Joel in a matter-of-fact conversation devoid of anything like grief, anger, horror, or regret on either of their parts.

Gideon explains that he didn’t like Betty because she was “a snoop” and “too good”—and he also implies that he bedded her before succumbing to this dislike. Betty was tolerable as a sexual partner, but she made him feel inferior, so she had to be dispatched by the clearly-coded-as-virginal Mildred. Making this even ickier is that Betty is killed in the same meadow where, just a couple scenes before, the bodies of slaughtered sheep were found. The connection between the woman and the service animals is blatant.

Again, I’m not sure if “The Phantom Farmhouse” is trying to comment on the sexual insecurity eating away at these archetypes of supposedly enlightened 1970s masculinity—Joel, the cultured intellectual; Gideon, the sensitive, guitar-strumming bohemian—and demonstrating how their Madonna desires are ultimately both corrosive and unreal. If it is, this becomes a more engaging piece of horror parable, if not a more effectively executed one. If it’s not, well, then it’s just as ugly as it is dull.

Les: An interesting pair of stories, and ones I’m glad we discussed together even if there was a clear qualitative difference between the two. I’d never seen this series before (going four for four this month) but it definitely had several of the same qualities as The Twilight Zone, that same disquieting disconnect where even the most normal-seeming moments are slightly off  in that characters aren’t seeing the same things normal people are. Serling, as has been mentioned a few times when we’ve discussed anthology dramas, is the quintessential host for this sort of thing, and the alien quality of the gallery in the opening introduction goes a long way to transporting the viewer into a different mindset. (And I’m also thrilled I finally understand the reference The Simpsons made way back in “Treehouse of Horror IV.”) 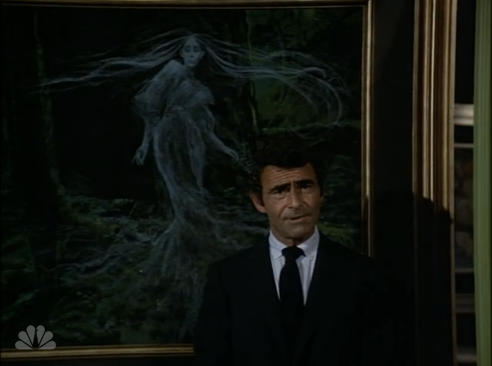 As to the stories themselves, “The Phantom Farmhouse” was definitely a weak installment. It’s always a pleasure to see David Carradine in anything, and I particularly enjoyed his disconnected performance as a recovering addict who may or may not be communing with otherworldly forces, prone to acting out by smashing his guitar and breaking conversations to offer a game of croquet instead. But otherwise there’s definitely not much holding it together—the relationship between Joel and Mildred came across as forced to me, the story dragged and plodded along, and the ending resolution didn’t feel satisfying because they failed to make me feel invested either in the fate of Joel or the three werewolves.

Andy, I certainly see the point you’re making regarding the piece as gender commentary, and I think that they did have higher aspirations but it’s just clumsily handled. Possibly due to the fact that the Seabury Quinn story they adapted for this was written in 1923, and therefore they had to update the context by several decades. I haven’t read the original story so I don’t know for certain, but the writing here definitely smacks of overshooting the mark to the point the message is either botched or missed entirely.

“Silent Snow, Secret Snow” on the other hand I have read the original story of (available here courtesy of the Virginia Quarterly Review) and both story and episode are legitimately terrifying. Like “Breakdown,” this is a story that is very much internalized, but while Joseph Cotten’s character was desperately raging against the confines of his mind, Paul progressively draws deeper and deeper into them. Noel and J., you both offered your theories as to why he does, and the ambiguity of the story makes it even more fascinating and frightening because any of the above could be right. There’s no indications of his being bullied or abused, either at home or at school—he simply wants to go away without explanation, to a place where things are more muted and peaceful.

Except it’s not so peaceful, is it? The authoritative narration of Welles goes a long way to set the mood (thankfully not interjecting into the discussion of snow and ice to say “Every July, peas grow there”), as the closer the story draws to the end the more it seems like the snow is less about helping him escape than claiming him for its own. The snow becomes not so much his refuge or confidant, but something far more ancient and almost malevolent, something that wants to bury him until all individuality is gone and nothing but the white drifts and seamless hiss remains: “We’ll tell you the last, the most and beautiful and secret story… we will take the place of everything.”

For the next roundtable, we’re going to once again take a thematic approach, looking at multiple shows inside a single genre. This time, our focus is on some of the great detective dramas, looking at their approach to both solving crimes and the dynamic of the detectives in question. We’ve opted for a mix of portrayals, from the lone sleuth to the mixed-gender partnership.

And fittingly, our squad room has been restaffed for the discussion, as Les, Andy and Jessica are joined by new members. Cory Barker rejoins us after a month off and we welcome Sabienna Bowman, Kerensa Cadenas and Cameron White for their first discussions. As there’s a lot of us, we’ll be rotating coverage of the shows, which should hopefully provide a nice variety in the discussion.

11/22: Off for Thanksgiving. Please eat turkey and discuss your favorite holiday specials until we return.