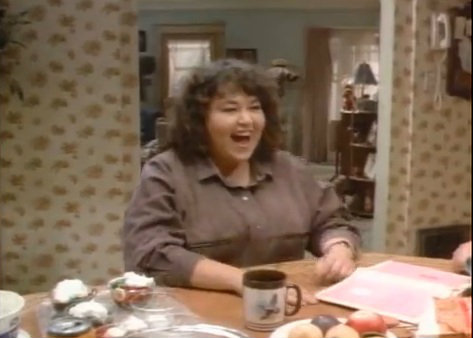 Roseanne Barr—just seeing her name can provoke a powerful reaction from her fans and detractors alike. The comic is one of the most divisive figures to ever work in the television business. Her tumultuous private life and behind the scenes behavior on the set of Roseanne kept the tabloids in business in the ‘90s, while her onscreen persona became the definitive feminist icon of the working class. Undeniably talented and always provocative, Roseanne Barr challenged every preconceived notion of how a woman should be and made a hell of a lot of people angry in the process.

From its debut in 1988, Roseanne was a series that mirrored the social concerns of its creator. Barr’s goal was to draw on her own experiences as a mother, a feminist, and a woman who knew the struggles of the working class because she was a part of it. It was radical thinking on her part. The ‘80s and ‘90s boasted other sitcoms driven by feminist themes—Murphy Brown and Designing Women–but their protagonists were all firmly in the middle class. Economic woes were not a primary concern for them; they could focus on the struggle for equality as women without ever facing issues that stemmed from being poor.

Roseanne presented an entirely different worldview. The character of Roseanne Conner was not a glamorous figure. At the outset of the series, she worked in a plastics factory to help her husband, Dan, support their three young children. She fought inequality at work and ran a household at home. She was a new kind of “domestic goddess” one who was tired, snarky, and loud. Like Roseanne the performer, Roseanne the character never seemed to care what other people thought of her. She was too busy helping her children navigate the pitfalls of puberty and trying to keep the lights on to concern herself with vanities. Her home was shabby, she wore bulky, inexpensive clothing, and often used the word “ain’t.” Shockingly, the effect didn’t produce a character that felt uncouth. There was never any question as to whether or not Roseanne was smart (her jokes were far too sharp to suggest anything else). The audience didn’t feel an impulse to laugh at Roseanne because it was clear she was one of them.

It was Barr’s “working-class domestic goddess” stand-up routine that first inspired The Cosby Show producers Marcy Carsey and Tom Werner to bring Barr on board for their new sitcom about factory workers. The project was to be helmed by Matt Williams. That premise was ultimately traded in for a family-centric story about the working class Conners. Although Barr’s routine and other anecdotes from her life ultimately formed the basis of the series, the Writer’s Guild maintained that Matt Williams was the series creator. The battle over the series creator title marked the beginning of Barr’s struggle for creative control of Roseanne.

Barr’s background labeled her an interloper in Hollywood from the outset. The majority of people who create television either come from within the fold or from affluent and middle class backgrounds. Carsey, for instance, graduated from the University of New Hampshire before working as a tour guide at NBC and segueing into her career as a producer. Barr hailed from a working class area of Salt Lake City. Both women self-identified as feminists, but because of her position of privilege, there were aspects of Barr’s experience that Carsey would never be able to understand.

The particulars of the behind the scenes battles at Roseanne remain muddled, with both sides maintaining conflicting stories, but the core issue for Barr was ensuring the series was authentic and her infamous “tantrums” were rooted in a desire to maintain creative control. For Barr, Roseanne was intensely personal. It was her story, for better and worse, and the way her desire to protect her authorship has been spun as petulant childishness speaks to the general reaction she faced when she entered Hollywood. She was seen as an emerging star in need of handling, when in fact she was a creator, albeit one with her fair share of issues (the numbers fiasco remains a particularly disturbing anecdote of her efforts to demonstrate her growing power).

The first season ended with an episode that echoed Barr’s real life struggles by directly addressing harassment in the workplace, patriarchal subjugation, and integrity. In “Let’s Call It Quits,” Roseanne battled with a new supervisor at the factory over raising the workers’ daily quotas to an unreasonable number. The supervisor saw Roseanne as a threat to his authority, and promptly set about trying to break her by convincing her to fall in line in return for lower quotas. Throughout the episode demeaning language is the supervisor’s weapon of choice. He addresses Roseanne and the other women as “doll” or “sweetheart,” and even equates them to cows at one point. Most humiliating for Roseanne, is when she is forced to address her new boss as “sir.” The episode ends with Roseanne and her fellow female co-workers quitting their jobs in the name of integrity. As a capper to a season that saw Barr fighting to wrest control of the series away from Williams, it carries a sense of catharsis.

In front of the camera, Barr was doing nothing short of sparking a cultural shift. Roseanne entered the top ten in the Nielsens in its first season and remained there until its eighth. Americans saw Roseanne as a kindred spirit, as her family faced the same struggles that their own families, who were living through the recession during the late ‘80s and early ‘90s, were facing. Even the National Anthem debacle couldn’t dampen her popularity. As the show became more and more successful, Barr faced less meddling from the network. Williams was no longer a part of the series after the first season, and the revolving door of writers began. In her 2010 New Yorker editorial “And I Should Know,” Barr reflected on the period:

But at least everyone began to credit me. I was assumed to be a genius and eccentric instead of a crazy bitch, and for a while it felt pretty nice.

In light of current events, Roseanne’s themes remain timely. With the country once again living through uncertain economic times, the Conner family’s trials still ring true. The current television landscape is almost entirely devoid of characters like Roseanne. Several shows pay lip service to persistent joblessness and financial crises, but only ABC’s The Middle and Showtime’s Shameless are committed to putting lower-income families front and center. Neither of those shows features a character as nakedly feminist as Roseanne Conner though.

More than anything else, it was the way class issues intersected with feminism that made Roseanne significant. In “Trick or Treat,” the series second Halloween outing, we see Roseanne dress as a lumberjack for Halloween. She passes so well that she spends the evening exploring the world as a man. This includes overtly comic moments such as Roseanne’s trip to a urinal, but it also delved deeper to examine the ways in which men relate to each other and to women from the point of view of a woman. Later, in season six, Roseanne spent an episode questioning her sexuality after a receiving a kiss from a woman in a gay bar. In fact, during its nine year run Roseanne explored many taboo issues relating to sexuality including frank discussions about birth control, masturbation, gender stereotypes, and coming out. A few late season missteps aside, the series handled social topics with grace by seamlessly weaving in the moments of import between jokes.

Roseanne ultimately went off the rails in its final season when the Conners suddenly won the lottery. The idea was to follow Barr’s life trajectory to some extent, and explore the advantages and disadvantages of class elevation, but the Conners’ nouveau riche lifestyle ultimately robbed the family of its relatability. Seeing Roseanne go on shopping sprees was jarring after so many years of penny-pinching. In the series finale, Barr made the controversial choice to reveal that the entire lottery plotline had been a fantasy cooked up by Roseanne, who had actually been penning a novel for several seasons. While critics and fans hated the finale, Barr loved it. She told EW: 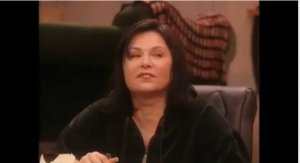 In retrospect, the strange ending was fitting for a show navigated by a woman who was committed to maintaining authorship at all costs. Both Roseanne the character and the actor were revealed to be in control of their own stories, seeking to add sense to the random, chaotic events of life that would otherwise be beyond their control. It may not be an ending that anyone other than Barr or Roseanne Conner could love, but the beauty of the creator and her creation is that neither one of them needs validation from anyone other than themselves.

Previously on Women in the Box: Janet Tyler, The Twilight Zone

Sabienna Bowman is a freelance writer and regular contributor at TV Equals and Film Equals You can find her previous work at Wit & Fancy. Follow her on Twitter @sljbowman.

3 Responses to “Women in the Box: Roseanne Conner, Roseanne”