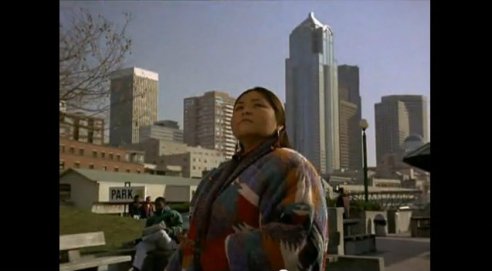 Marilyn Whirlwind is probably not the first character that comes to mind when you think of Northern Exposure, the eccentric small town series set in the fictional hamlet of Cicely, Alaska that ran for six seasons from 1990-1995 on CBS, but maybe she should be. In a sea of soul-searching vagabonds who found their way to Cicely by chance, Marilyn was a local. She was a permanent part of the tapestry that made up the idyllic, off-beat community of Cicely, outlasting even Dr. Joel Fleischman (Rob Morrow), the Woody Allen-esque protagonist who provided the series with its center until early in the sixth season. From the moment in the pilot when Joel found Marilyn in his office, quietly immovable in her insistence that she was his secretary even as he protested that he didn’t need one, to the very last episode, where Marilyn became the final character we saw before she drew her blinds down, effectively ushering us out of Cicely for good, Marilyn was there.

Not only was she there, she was there representing a minority that is largely ignored in America, both onscreen and off. Both Marilyn and Elaine Miles, the woman responsible for breathing so much life into Marilyn’s trademark stoicism, are Native American, and much of Marilyn’s characterization was rooted in her cultural identity. Marilyn was one of three regular Native American characters on the series, and the only constant female Native American presence. In that way, there was a weight of responsibility placed on Miles’s shoulders as she became a public face for the Native American community, a role she never anticipated taking on when she agreed to drive her mother to an audition for a series called Northern Exposure.

Prior to being cast, not only was Miles not a professional actress, she had no intention of becoming one. It was her mother, Armenia Miles, who wanted to audition for the role of Marilyn. Miles agreed to drive her mother to the open call for Native American actors and was spotted in the waiting room. After she was convinced to audition, Miles was offered the role (her mother also landed a part on the series playing—who else—Marilyn’s mother). Despite her lack of experience, Miles embodied the whimsical, unique character of Marilyn with grace and skill right from the start, and even imbued her with many of her own personality traits as the series progressed.

There were a few stumbles in characterization along the way though. Marilyn was a character of few words, but the words that she did speak were always meaningful. The series often relied heavily on Marilyn to impart wisdom through storytelling, as in the season five episode “A Bolt from the Blue,” where Marilyn relays a parable about a lucky warrior to help cinephile Ed, work through a philosophical crisis. As a narrative technique, Marilyn’s storytelling tendencies were useful, but they were also representative of the way Northern Exposure struggled with avoiding stereotyping Marilyn.

The characterization of Marilyn was particularly problematic in the early seasons. In a 1993 interview with Radiance magazine, Miles revealed that she was initially instructed to over-enunciate words and keep her expressions neutral. These factors, in addition to Marilyn’s hair being styled almost exclusively in two braids, troubled Miles, but it would take some time before she found the courage to bring the matter to the attention of the producers. However, when she did, she was able to implement real change. 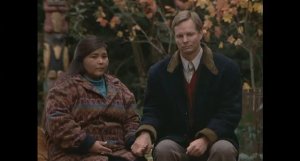 Over time, Marilyn’s hair style evolved and so did her manner. While she never became the most loquacious member of the ensemble, Miles was allowed to make the character more demonstrative. In later seasons, she even began to carry her own storylines, as in the season three outing, “Get Real.” In the episode, the always quiet Marilyn met her perfect match in Enrico Bellati, the silent Flying Man, who arrived in town with a traveling troupe of circus performers. Their flirtation required Marilyn to do all of the talking as she pulled double duty expressing her own feelings, and acting as an interpreter of his. The storyline marked an important step forward in the evolution of the character, further distancing her from the clichés that plagued Marilyn early on.

Throughout the series, Marilyn’s most important role was to act as a foil for her uptight boss, Joel. While Joel was the indisputable lead, he wasn’t always an easy character to like. His neurotic tendencies and constant pining for his old life in New York could grate, but that’s where Marilyn came in. Her calm demeanor balanced out his chattering, and whenever Marilyn and Joel were together, her playful side shined through. As Heather E. Eps points out in her essay, “Going Native in Cicely, Alaska: American Archetypes and Hybridized Identity on Northern Exposure,” Marilyn often teased Joel in ways that he himself would fail to pick up on, like when she would insist that their was a call on line one, even though she knew their was only one line, highlighting his fallibility and the foolishness of his superiority complex in the process.

More importantly, their relationship brought out Joel’s humanity. In the beginning, he didn’t want a secretary, but he came to admire, respect, and value Marilyn. She became one of Joel’s first friends, and perhaps, his strongest connection to Cicely. Their friendship took center stage in the season four episode “Learning Curve,” which saw Marilyn heading to Seattle in search of an adventure. Joel became so panicked by the idea of Marilyn being alone in the city, that he ended up agreeing to tack on extra months to his stay in Cicely, in order to be allowed to leave the town long enough to follow her to Seattle. He finds her safe and sound, of course, because Marilyn is nothing if not resourceful, but the greater purpose of the story was to reveal that Joel, the supposedly hardened city boy who was only biding his time in Cicely, had allowed himself to form a real attachment to a woman who was in many ways, the human embodiment of all of the qualities that made Cicely such an appealing place to visit every week.

Northern Exposure certainly had flashier characters than Marilyn Whirlwind, but none of the others felt quite as connected to Cicely as Marilyn did. As a character, she was shaped by her heritage and her heritage was rooted in the town. She wasn’t a visitor or a transplant, Cicely was a part of her. She stood out against all odds—saying little, but leaving a lasting impression through her wise, welcoming and relaxed demeanor. A true product of a town, and a series, that’s driving philosophy was everyone is welcome as long as they can slow down and appreciate the simple things in life.

Previously on Women in the Box: Roseanne Conner, Roseanne

Sabienna Bowman is a freelance writer and regular contributor at TV Equals and Film Equals You can find her previous work at Wit & Fancy Follow her on Twitter @sljbowman.

One Response to “Women in the Box: Marilyn Whirlwind, Northern Exposure”

Leave a Reply to Women in the Box: Ethel Mertz, I Love Lucy | This Was Television Cancel reply