Sometimes the results of elections aren’t that exciting. Though the 2012 election certainly seemed tense at the time, in sweet 20/20 hindsight it just looks like we should have trusted Nate Silver. That retrospection magnifies even more intensely for elections over 15 years in the rearview mirror. Case in point: the 1996 presidential race was a landslide. When all was said and done, Bill Clinton won reelection with an extraordinary 379 electoral votes to Bob Dole’s 159. Clinton, who had become extremely popular in the period after the 1994 midterms, more or less coasted to victory. But that doesn’t mean that there wasn’t anything to learn from the election in general and the debates in the election more specifically. We’ll get there by looking at one of the Republican primary debates and the first general election debate.

Though there was no Democratic primary race, the Republican primary was still fascinating (in a parallel to the 2012 election). Clinton’s unpopularity in his first two years in office meant many Republican candidates entered the field expecting an easy general election race. However, as Clinton became increasingly popular, those candidates found themselves in an uncomfortable position, and the group of viable candidates narrowed quickly. Those who chose not to run ended up as a who’s who of the next Republican administration – Colin Powell, Dick Cheney, and George W. Bush himself were all heavily courted to enter the race and chose not to do so.

In addition to Senator Majority Leader and former vice-presidential nominee Dole, the other major Republican candidates were Pat Buchanan and Steve Forbes. Again, the primary race was something of a foregone conclusion. Dole was consistently the frontrunner, and wound up with the nomination. But, as with the 2012 primaries, there were important results of the primary process, and some substantial electoral bumps along the way for the crowned nominee. Dole’s position as the frontrunner was challenged by weak performances in the early primaries, including Buchanan (particularly the New Hampshire primary) and Forbes (Delaware) victories. Throughout, Dole presented himself as an extremely conservative candidate, attacking the other potential nominees for being too liberal in ads like this one:

Dole’s use of conservative rhetoric is fascinating, particularly as the focal point for his televised strategies. During the transitional period where Clinton seemed vulnerable, it’s plausible that a conservative strategy seemed appealing, though it would later box Dole in substantially in the general election (as we’ll see).

Those primaries also featured several debates, including one in Tempe, Arizona, featuring most of the major candidates (sans Dole). That debate presented some evidence backing up the conclusions from earlier presidential primary cycles. We’re lucky here to have the very literally titled How A Presidential Primary Debate Changed Attitudes Of Audience Members, a study of the effects of that Arizona debate by political scientists at Arizona State University. Though this debate didn’t feature frontrunner Dole, the authors still had some relevant insights into the primary debate process. Here are some of the more interesting things to take away from their study of the debate:

In fact, almost 40 percent of respondents changed the candidate they were planning to vote for after the debate. So how does the effect of primary debates play into their role as televised events (since I doubt anyone is looking for a dissection of the political science)? One possibility is the size of the audience. Even when primary debates are televised, they aren’t nearly as much “event television” as the general election debates, which are consistently some of the most widely viewed broadcasts of all time. The smaller audience not only allows an intimacy with the candidates (particularly since partisans will feel each candidate is on “their side” and thus be more open to their candidacy), it also means the candidates feel freer to say what’s actually on their mind and not engage in the elaborate dance of general election debates.

Sadly, as in 2012, the frontrunner candidate wound up as the victor in the primaries after all was said and done. Dole managed to run a campaign without really getting his hands dirty, positioning himself as a staunch conservative through ads like this one: By the time the general election season rolled around, President Clinton was looking at an excellent position in the polls.

It’s true that Clinton was poised to win easily heading into the debates, but Dole’s performance in the first debate was so bad that his decision not to participate in the primary debates turned out to have been unfortunately wise. Potentially more than any other candidate we’ve encountered, Bob Dole tool all of the inherent possibilities of television as a medium for debates and used them to crash and burn. Not only was Dole the least telegenic candidate since Nixon, he seemed throughout the debate to lack a clear grasp of what one had to do to come off well in the format. There were two debates in the 1996 cycle, and Dole proved himself the candidate least capable of taking advantage of the ordinary challenger bonus in debates.

In Dole’s opening statement in the first debate in Hartford, he didn’t even remotely attack Clinton. The closest Dole came to actually advocating for himself was telling the audience that, “Jack Kemp and I want to share with you some ideas tonight,” a poor attempt at folksiness with no teeth whatsoever. There are constant refrains for increased civility in politics (not without justification), but at a certain point candidates need to make a definitive contrast. Take a look at this snippet of the debate (sorry guys, C-SPAN disabled embedding), which exemplifies most of Dole’s problems throughout. 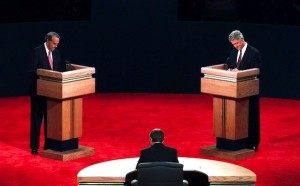 First, he refused to use the sort of clear, decisive language that would make for not only good sound bites but would also present him as charismatic and a good leader. When he tried to paint Clinton as a hyperpartisan Democratic, the closest he could muster was criticizing the president for pushing through a budget agreement that “some didn’t like.” Oh no! Imagine voters at home trying to understand why they should reject President Clinton and hearing that “some” didn’t like his budget proposal.

Even worse than his weak language, Dole just seemed to lack the confidence necessary to be the Commander in Chief. During this exchange, he used a variation on Reagan’s famous debate line, saying, “There he goes again.” Though this could have been a bold attempt to reassert himself as the standard bearer of the party of Reagan, Dole bungled this line enormously. He refused to even directly address Clinton, seeming even less confrontational or assertive in a field where successful candidates must appear powerful. Though Jim Lehrer attempted to enforce a rule whereby the candidates did not directly question each other, the 2012 cycle demonstrated how effective breaking that rule could be. And none of this is even mentioning Dole’s tendency to refer to himself in the third person, something that helps make figures memorable, but probably not presidential.

Dole also self-consciously referenced Reagan’s famous debate moment, saying, “That line has been used before” almost as an aside. If a candidate is going to reference one of the most famous moments from the history of presidential debates, it seems reasonable to assume he should do it in a well-prepared fashion. By contrast, Clinton’s response to Dole’s attack was calm, collected, and confident, as he carefully explained the reasons Dole’s charges were wrong and made the case for a second term. He even managed to close his answer with another reference to Reagan, asserting that, “We are better off than we were four years ago.”

That first debate was disastrous for Dole. Though he gained slightly in head-to-head polls (as almost all challengers are wont to do after appearing on the debate stage for the first time), he was widely perceived to have lost the debate. That’s the only time a challenger hasn’t come across as the winner in the first debate – after all, the challenger doesn’t have four years of a record as president to defend, and appears more qualified for the job to skeptical voters by simply appearing on the same stage as the sitting president. After a first debate performance like that, what more is there to say?

As we get closer to the most recent election, the factors at play in the 2012 debates have come into focus somewhat. In what ways did Romney take advantage of factors that Bob Dole failed to utilize? How did the 2012 debates differ? The 1996 debate included several charges of flip-flopping from a sitting Democratic president on a candidate who presented himself as conservative – a pretty familiar situation, that played itself out in roughly the same way electorally. Though the 1996 debates might not have been that exciting to live through, from a historical perspective they might have offered some insight for those looking to predict the most recent debates. The historical significance of the debates will only increase once we get to one of the more exciting modern contests – Bush v. Gore.

One Response to “Debate Night: Clinton/Dole, 1996”