Well, here we are, the end of Oniisama e…. It was a 20 week journey (and then some, due to alternating weeks with Super Friends), and while it took all of This Was Television’s first six months of existence, it was an delight to do it.

The last two episodes lock in the return normalcy and end of experimentation in the lives of the characters. The (mostly) chaste sapphic love that marks adolescence is swept away in favor of standard heterosexual relationships. This isn’t surprising in any way. The show has, since Rei’s death, brought the men of the show forward more, reasserting their importance in the lives of our women, and it very much feels like a part of growing up, putting away the childish infatuations, and becoming a mature woman. 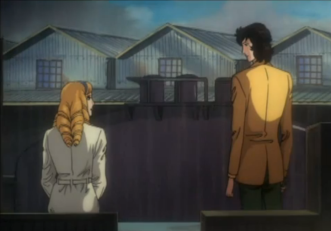 And our women have become mature. Miya-sama not only realizes that she can love more than one person, after a visit to the shack from that summer long ago and an apparition of Rei telling her not to stay in this stasis, to move on, and be that woman full of dignity that Rei always saw her as. It means, of course, telling Kaoru that she’s being a touch ridiculous by refusing to go to Germany with Henmi. Their exchange at the train depot has the tensions of two people who have never liked one another—it was Kaoru, after all, who sought to bring down the Sorority—but they’ve both changed even since then because of Rei’s passing. Miaya-sama is finally in a place where she can let someone else love Henmi, and Kaoru won’t dismiss her as having some sort of agenda or plot. They’re speaking plainly and honestly, a rare thing for this series.

Mariko’s development wraps up neatly as well. She’s still very much on the fence about ever seeing her father, but she and her mother have moved out the mansion and into a modest apartment. I was glad to see this (and that Nanako is now painting a second nail on her hand now), but I was also glad that Mariko isn’t completely okay. She’s still stubborn and a bit selfish, but it’ll take time to repair her life, and moving out from that mansion is the best first step she could take.

Then there’s Nanako. She’s never been selfish, at least not in horrible ways (she does abuse Tomoko’s friendship, but Tomoko is way too cool to be too bothered by that stuff), and even her plea to Kaoru to go to Germany with Henmi comes from that place of love, a sense of understanding that some people truly need another, that special other, that completes them somehow. She knows that Kaoru completes Henmi, and vice versa. She’s always thought of others first, but even when she thought of Rei before anyone else, it was due to blind infatuation and a desire for that infatuation to be reciprocated that motivated her. Here, Nanako puts the feelings of others before herself, refusing to back down even the slightest bit. Even her question to her father about her biological dad demonstrates the understanding that asking her mother would only cause pain in the household. (That entire scene, while a nice way of showing Nanako’s development, feels incredibly extraneous to the story.)

So everyone moves on. Kaoru marries Henmi and moves to Germany (apparently dropping out of high school…?) and they have a child together. Nanako grows her hair out and is starting a relationship with a sophomore at a university. The episode concludes as the cherry blossoms blow past her and it calls back a similar scene from the very first episode, but instead of looking on in awe, Nanako is at peace with who she is, and where she is going. 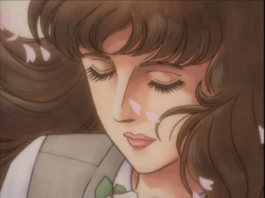 As I’ve been saying for weeks now, I’m taking the rest of the month off now that Oniisama  is complete. But I’ll be back in January for a month of coverage of Astro Boy in honor of the show’s 50th anniversary. I’m going to start with the very first episode, “The Birth of Astro Boy.” I’m still looking for suggestions for other episodes to watch, and will announce the rest of them in January in the post about the first episode.

Likewise, I’m still seeking suggestions for a show to start coverage of in February. Anything animated and readily available in the United States is fair game. Nothing too recent though, please. Ideas from others so far have been Sailor Moon, Gundam, and Star Trek: The Animated Series; I’ve also considered doing Revolutionary Girl Utena as I have the first arc on DVD. Maybe the first season of Disney’s Gargoyles? Or should I do Adventures of Gummi Bears before that?

2 Responses to “Review: Oniisama e…, “Yes…” and “A Lingering Fragrance””