*I’m supplying the Japanese episode numbers and titles and then both Japanese and U.S. airdates when possible, and I’m watching the dubs from the Astro Boy Ultra Collector’s Edition sets released by Right Stuf in 2006.

Selecting episodes to watch for Astro Boy has been something of a challenge since I’ve only ever seen a random collection of episodes over the course of the years. I’m not sure what’s iconic, great, terrible, or otherwise notable. The availability of dubbed episodes that have been re-worked for American syndication broadcast in the 1960s only adds to this challenge (poor machine gun butt…). Both of these episodes were mentioned in fan forums as favorites, and so here they are! (In an effort to try to be a bit more unified in the episode selection next week, I picked two episodes that include Astro Boy’s sister Uran [aka Astro Girl], including her very first appearance.)

This pair of episodes actually helps to highlight something that was a rather central concern for NBC Enterprises when they were considering buying Astro Boy, and that’s the sequencing of episodes. According to Fred Ladd, it was easier to sell shows to station owners when the episodes could be shown in any order without the worry of continuity, two-parters, and so on. Neither of these episodes are connected in any way, but I highlight this because there’s a 19 episode gap between these two episodes in the Japan broadcast order; and in the U.S. airings, not only is there only an episode between them, but their order was reversed. 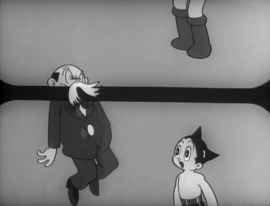 The notion of watching things “out of order” is a bit foreign us to these days. Even shows that routinely run in syndication are often shown in order, and with episode descriptions on the screen now, we can see even which season and episode number it is, including the older fare on TV Land or the Nick at Nite programming block. Certainly that sort of approach matters less with kids’ programming, where the expectation is that kids will likely watch it regardless of which episode it is (probably somewhat unfounded as kids have favorites), but it also demonstrates how that expectation was/is formed by business demands of station owners and network executives.

In any case, with “Time Machine” and “Führer ZZZ,” we get two very different plots, but both episodes demonstrate a similar sort of pulpy adventure mentality that you’d expect from a series adapted from a weekly comic. While I preferred  “Führer ZZZ” over “Time Machine,” what I really like about both episodes is how their catalysts for action isn’t really Astro Boy so much as outside forces drawing in Astro Boy to their plots. It’s especially true in “Führer ZZZ” where Astro just opens the door of some booth on a street corner and walks into the ZZZ’s plans for world domination… and then throwing a kid into a city canal. As you do.

What I like about this approach is that it gives the sense that adventure finds Astro, not the other way around. He isn’t out patrolling, looking for crises to intervene in; instead the show allows a universe to be built around Astro that he in turns interacts with. It’s a universe full of time travelers, would-be despots, and “primitive gas” along with giant robots and space travel and aliens. It’s an especially useful structure for a kids’ show since it implies a world of thrills and excitement that is just waiting for you to run into it, that even if you’re not a little robot boy, there’s still plenty of things happening just outside the door. 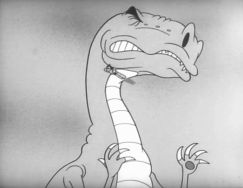 But some adventures are better than others. I never really felt the urgency behind in “Time Machine,” or the dramatic stakes. As a result, the whole Time Hunters aspect seemed a little unnecessary, more of a way for the plot to happen. It could’ve just as easily been a time machine at the Institute of Science that set everything off and running. I know it may seem a silly thing to expect such things, but just a bit more thought behind the premise would’ve been fine for me.

Premise set-up aside, “Time Machine” is probably the most whimsical of the two episodes this week. I mean, Astro gets beaten up by a woolly mammoth and then he fights some other dinosaurs, including one that ended up in the far-flung future after it was sucked into the time machine’s tubes. Likewise, there’s plenty of small touches I liked, including the magnetic rock that hinders Astro, the female-led lizard-tailed humans, and, perhaps more enjoyably of all, how the episode ended with the effects of the time travel present as archeologists summoned Higeoyaji (Mr. Pompous in the dub) to show off the caveman’s portrait of the mustachioed man. 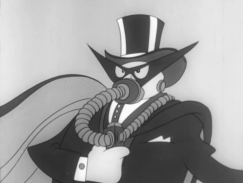 On the flip side, I found “Führer ZZZ” to be a more coherent and complete episode, if a little less… fun, with the episode’s “fun” element just being sort of odd. Here, the masked man Triple Z is attempting to take over the world by turning all of the world’s leaders into idiots using “primitive gas.” And by “idiots” I mean those infected by the gas become like apes or cavemen or infants. While I thought that the gas might’ve been a way for NBC Enterprises to censor Triple Z’s assassination of these world leaders, it turns out that the primitive gas was the plot from the manga as well. I find the whole plan very weird and not exactly funny. Higeoyaji’s infection with the gas shows it’s not exactly fatal, so it may wear off, can be treated, leaving Triple Z’s plan to insert himself a world leader as not the most thought out of schemes.

The rest of the episode, however, I really enjoyed, including the reveal that Triple Z and President Lyon (Pudge in the dub) were brothers. In a fit of pleasure with the dub, I thought, “Well, they could be related, or else Ladd was just short-handed when they recorded the dub that day and the same actor did both parts, with slightly different voices.” Either were possible, and thus it was still a nice surprise at the reveal.  The henchmen Pegleg was also a highlight since he was rather cruel, and the dub didn’t seem to play down that aspect of his character, though why he has a peg leg when there are robots about is beyond me.

I think my favorite thing about both episodes were the small things that were unrelated to the episode’s plots. Whether it’s the the out-of-sync film reel from “Time Machine” (pictured above) or the opera/ballet performed in the fourth dimension in “Führer ZZZ,” there’s a playfulness, a willingness to pause and do something just a little out of the ordinary that I really appreciate. It’s excessive, sure, but like the robot parade and the alien lifeforms from last week’s episodes, they’re celebrations of the medium, showing off the creativity of Mushi Productions’ animators.