Last week gave us a pair of episodes that were low on adventure but united in their use of Uran/Astro Girl. For the penultimate week of Astro Boy coverage, I selected a two-parter, a rarity in the U.S. broadcast of the series, as NBC Enterprises wanted to give the markets they sold the series to as much flexibility as possible in how and when they aired the episodes. It was a sensible approach, especially as considering that some buyers may have passed on some episodes due to content that might offend their markets. But they could rest assured that this Egyptian-themed two-parter, at least in the dub, feels connected in only the thinnest of ways. 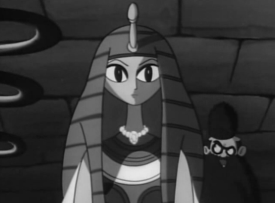 “The Egyptian Conspirators” lays out the whole plot: Using a robot Cleopatra as figurehead, an old school chum of Ochanomizu’s named Baribari (Rasburton in the dub) aims to create an Egyptian empire that will span the globe. But to convince the populace of Egypt (who appear to be a bunch of saps) that the robot is actually the resurrected Cleopatra, he needs a heart-shaped necklace that belonged to the ancient queen.

The necklace is retrieved at some point, but a defector from Baribari’s army—the Crimson Brotherhood—manages to entrust the necklace to Higeoyaji, who of course brings it back to the States for safekeeping. Also working against Baribari’s plans is his Cleopatra robot, who keeps having have crises of conscience due to the violence that has to be perpetuated in order to achieve the madman’s goals. She even mentions, in the dub, how much she’d like to live like Rebecca of Sunnybrook Farm. The Crimson Brotherhood manages to pilfer the necklace again, but after they attempt to kill their own members once Astro Boy stops them and the giant robot beetle, one of them offers up the necklace to Astro.

To gain some leverage over Astro, the Crimson Brotherhood abducts Uran. Amusingly, the series seems to like to decide when Uran can use her abilities. Against a man destroying art, she’s helpless. But has no problem holding her own against the Crimson Brotherhood until faced with one of their giant robots modeled in the image of a Egyptian deities. Astro arrives and handles each of the robots with much of a problem, including the one piloted by Baribari and holding Cleopatra. It falls into the ocean and that seems to be the end of that.

Indeed, the episode generally feels very self-contained due to the ending. Even though Astro notes that he has a feeling that they’ll see Baribari and Cleopatra again, it’s not clear if it’ll be next week, next month, next year, or even ever again. Should a syndicator decide to air the follow-up episode, then there would be a connection between the episodes. But if a few episodes aired between them, there’d be hardly any confusion for audiences.

Framed this way, “Cleopatra’s Necklace” feels more like a sequel than direct continuation of “The Egyptian Conspirators.” Baribari and Cleopatra  have survived their supposed watery graves and have returned to Egypt, with Baribari pitching himself as some sort of prophet/shaman/holy man and stages yet another resurrection of Cleopatra in front of large crowd. But he still needs the necklace to fully convince everyone, and so the chase is on once again. The necklace, now back in Egypt thanks to Ochanomizu, is quickly stolen and returned to Baribari.

The episode is significantly less exciting than its predecessor. A part of this is that Astro spends a small portion of it incapacitated due to a fight with another Egyptian deity-esque robot and is recovered by a ex-Crimson Brotherhood member who ultimately doesn’t play much of a role beyond making minor repairs to Astro. Along similar lines, Cleopatra and Baribari tread the same territory in this episode as they did in “The Egyptian Conspirators” over her unwillingness to go along with the plans.

But the episode’s climax offers a surprising amount of darkness. With the plans for world domination crumbling, Cleopatra carries Baribari to a sarcophagus, stuffs him in there and then destroys Baribari’s temple/headquarters and herself in a murder-suicide. Astro’s too late to stop Cleopatra’s plan, and Ochanomizu tries to offer some comfort that with the two dead and gone, Egypt’s citizens can return to their peaceful lives.

“Cleopatra’s Necklace” offers a conclusion to the story (for lack of a better word). Baribari and Cleopatra are both dead, leaving the episode in an awkward position of always having to be aired after an airing of “The Egyptian Conspirators.” Otherwise, the characters’ lack of knowledge about the necklace in the former episode would make absolutely no sense. At the same time, it’s such a minor plot point, and if the two could survive the ocean, why couldn’t they survive the destruction of the temple? Could you watch the episodes with their orders reversed?

I imagine it ultimately doesn’t matter, but those sorts of considerations still likely played a part in decisions about airing either episode, and in what order, by some U.S. syndicators.