It’s fitting that the most memorable moment of “The Return of Happy Spangler” features Dick Van Dyke doing physical comedy. We’ve seen his knack for it several times before: his presentation to the kids in “Father of the Week” and his antics in “Where Did I Come From?” being the two best examples. Well, they were until now. This episode represents the pinnacle of his abilities, with the concluding “lecture” he gives about slapstick comedy representing not just the comedic high point of the entire season, but one of the comedic high points in television history. All in all, not a bad way to conclude our journey through season one as far as I’m concerned. 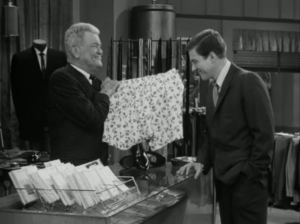 The rest of the episode isn’t quite as hilarious from start to finish as the season’s very best installments, but it’s still plenty entertaining and features a very good guest performance from Jay C. Flippen as the title character. Laura meets him while shopping at his tie shop, and when she mentions she’s married to Rob, he asks her give Rob “a happy hello.” It turns out that Hap is the one who gave Rob his start in the comedy writing business. Rob decides to return the favor by giving him a job on the Alan Brady Show staff.

For the briefest of moments, it seems like it’s going to go well, but Happy quickly proves himself a distraction rather than an asset: telling stories and reminiscing rather than coming up with any ideas. The other writers are forced to work nights as a result, and Rob realizes that he has to fire his old boss. It’s a solid storyline to build an episode around, although not nearly as funny as I remembered it being. But that all changes once Rob decides to not give up on Happy that easily, and begins to pick his brain for just one great idea. Hap mentions his love of slapstick comedy, as well as his belief that it wouldn’t work well on television. Why? Well, he explains, “people are too sophisticated and civilized.” 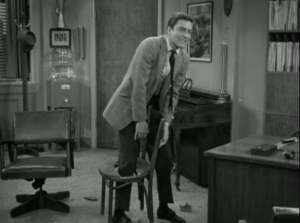 Are we so sophisticated that we can’t find slapstick funny? Well, of course not, and Rob and Hap are able to use this knowledge to create a fantastic sketch. And when I say fantastic, I mean it. I’ve seen this scene a couple of times before, and I know every bit of it by heart. And it doesn’t matter one iota. It’s still utterly hysterical. The concept is simple: Rob delivers a lecture about how far TV comedy and its audiences have come, while at the same time engaging in the kind of slapstick comedy he says people no longer find funny. It doesn’t really sound all that great when you say it like that, but just try to keep it together when Dick Van Dyke slams his hand in a desk drawer or puts his foot through a chair, all the while trying to calmly deliver his lecture about how “we no longer laugh at people destroying themselves.” It’s virtually impossible.

For this scene alone, “The Return of Happy Spangler” is a quality episode of Dick Van Dyke. Anything else in addition to those four utterly perfect minutes is just a bonus. It’s the show at the absolute top of its game. Again, a very fitting way to wrap up our look back at the first season of one of the best television comedies of all time.

3 Responses to “Review: The Dick Van Dyke Show, “The Return of Happy Spangler””