Everyone remembers their first love. This Hallmark-shaped nugget was the driving force behind nearly every teen series on air during the teen television boom that occurred in the ’90s. From Kevin Arnold to Cory Matthews, the airwaves were lousy with tiny lovelorn average Joes pining away for the girl-next-door who had stolen their hearts sometime around Kindergarten. It was through the eyes of these hopeless romantics that we saw the likes of Winnie Cooper and Topanga Lawrence—girls who were designed to be beautiful (but not in an intimidating way), innocent, kind, bright, and just damaged enough to give off the whiff of a modern day damsel. These characteristics were meant to suggest a comforting aura of normalcy and attainability. In actuality, it set them up as paragons of desirability for sensitive, heterosexual teen boys, while also presenting an image wholesome and genial enough not to put off the female members of the audience (who remain the true connoisseurs of teen television). 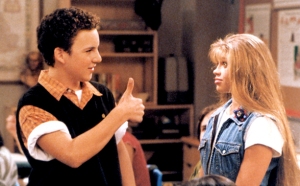 Unless you’ve been hiding out in your Mayan apocalypse bunker since December, you’ve probably heard about the upcoming Boy Meets World (1993-2000) sequel. Former ’90s kids have embraced the idea of Girl Meets World with a fervor previously reserved only for Beanie Babies and ‘N Sync concerts (or Backstreet Boys concerts, if you were awesome), and the revival has triggered a wave of nostalgia that extends well beyond Boy Meets World, to all of the earnest teen shows that populated the airwaves from the ’90s through the early ’00s. The continued attachment to shows like Boy Meets World makes sense when put into context: viewers both saw a bit of themselves in Cory Matthews and Topanga Lawrence, and wished for a Cory (okay, let’s be real here, a Shawn) or Topanga to call their own. They were designed to capitalize on the natural teenage desire to find someone to identify with, even if that someone happened to be fictional. Their triumphs were our triumphs, their adolescent angst was our adolescent angst, and their first loves? Well, you get the picture.

The only problem with this equation is that while the male teen characters like Cory were largely portrayed as unremarkable every-kids, the teen girls were saddled with the aforementioned burden of being the perfect first love, and little else. At least that was the case in the male-driven narratives; female-centric narratives allowed for a more nuanced portrayal of teen girls, although even they were almost exclusively led by girls who fit within the confines of the girl-next-door archetype.

While the girl-next-door trope has existed at least since Mark Twain’s days, we can lay the blame for its television heyday at the feet of ’80s teen cinema. Many early television characters, like The Brady Bunch‘s Marcia, embodied the characteristics of the modern girl-next-door, but unlike the crop of characters that appeared on television in the post-John Hughes/Cameron Crowe era, they were not set up as any singular character’s one true love (unless you believe 1996’s terrifying A Very Brady Sequel). It wasn’t until the teen-centric romantic comedies that catapulted the likes of Molly Ringwald and John Cusack to fame that the small screen started peddling the idea that every average guy’s first love was the sweet, unassuming charmer they had known since grade school. 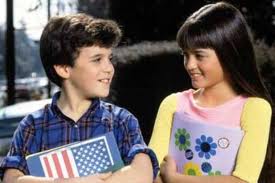 Perhaps the most perfect embodiment of television’s modern day girl-next-door archetype can be found in Winnie Cooper, the designated love interest of Fred Savage’s Kevin Arnold in ABC’s coming of age dramedy The Wonder Years (1988-1993). As a series, The Wonder Years was already shrouded with a layer of nostalgia when it began because it was a period piece told from the point-of-view of an adult Kevin, looking back on the period between 1968-1973, during which he grew from an adolescent to a young adult. His coming of age includes all of the usual markers: first crush, first kiss, first time, with each of his significant “firsts” involving Winnie. From the pilot, where the death of Winnie’s older brother in Vietnam leads Kevin to offer Winnie first his jacket and then comfort in the form of a chaste kiss, to the series finale, where the pair consummate their relationship (off-screen) just as it reaches its natural end, Kevin’s teen years are bookended by his love story with Winnie.

Winnie is a key element of the series’ success, but we are limited to seeing her only through Kevin’s eyes, and Kevin is hardly an objective observer, as he makes clear in the series finale, “Independence Day”:

Once upon a time there was a girl I knew that lived across the street. Brown hair, brown eyes. When she smiled, I smiled. When she cried, I cried. Every single thing that happened to me that mattered, in some way, had to do with her.

That’s not to say Winnie was perfect, only that she Kevin perceived her that way. In truth, Winnie was busy setting up the template for all of the girls-next-door of the future. Outwardly, she was pretty, popular, and smart, but right from the start Winnie came with enough emotional baggage to fuel a whole slew of very special episodes. The crux of the pilot is the death of her brother, and things only get worse for her from there as she deals with her own grief and her parents’ disintegrating marriage. Since Winnie, a shattered home life has become a pre-requisite for any female character vying for the first love title. If she doesn’t have one when the series starts, she’ll have one by the end, just ask Joey Potter (Dawson’s Creek) or Donna Pinciotti (That ’70s Show). 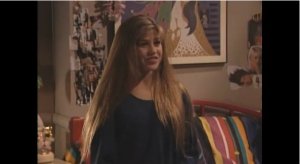 Winnie’s sunnier descendent is Topanga (Topanga’s love interest, Cory, was even played Fred Savage’s younger brother, Ben Savage), but Topanga is something of a special case, as she initially didn’t fit the first love archetype at all. Throughout Boy Meets World‘s first season Topanga is portrayed as a spacey, New Age-obsessed outsider among her classmates; an object of ridicule, rather than desire. Her personality was significantly recalibrated in the second season to mold her into a traditional, level-headed love interest type. It took three more seasons for her life to begin to destabilize in a Winnie-esque fashion, but we can chalk that up to the lighter tone of Boy Meets World. By season four her parents forced her to move to Philadelphia, throwing up the first major roadblock for Cory and Topanga’s relationship. The series sidestepped the issue by having Topanga move in with her aunt, but they weren’t done with her yet.

At the start of season seven, as Cory and Topanga were beginning to plan their wedding, Topanga’s parents announced they were divorcing, sending Topanga into an emotional spiral culminating in her losing faith in the very idea of love. Here again, Boy Meets World deviates from the first love playbook which dictates that the characters’ first relationship must come to an end at some point over the course of the series. That was how it went for Winnie and Kevin, who couldn’t complete their coming of age arcs without separating. Kevin’s young adulthood revolved around the belief that Winnie was perfect, his “soul mate,” but she ultimately became the thing that he had to let go of in order to proceed to the next stage of his life. In this way, Winnie becomes a symbol representing the “wonder years” of Kevin’s youth. 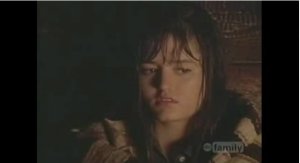 Cory and Topanga’s arc took a decidedly different path. Within four episodes, their relationship is back on track and the final season of the series focuses in large part on their marriage, making them one of the few teen couples to receive a happily ever after (an outcome that the Disney channel is currently very grateful for). If Winnie was the template for the modern girl-next-door, then Topanga is the ideal. After her New Age-tendencies are banished, she becomes the well-adjusted yin to Cory’s romantic yang, and together they create the kind of balanced, healthy relationship that most adults would envy, never mind the teenagers. There is an element of wish-fulfillment to the couple’s trajectory, and to Topanga herself, but by the end of Boy Meets World, Topanga isn’t simply a mythic, girl-next-door figure meant to fade away into Cory’s past, she represents his future. 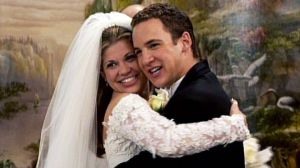 Topanga and Winnie are only two of the many girl-next-door characters of the ’90s, but they represent the two camps their compatriots fell into nicely. Either the modern boy’s first love was a long haul, happily ever after type like Topanga, or she was just another rite of passage on his way to manhood like Winnie. As long as they existed in male-centric worlds, the one thing they all had in common was that they were all pleasant ciphers meant to be loved by the boys trying to become men, both onscreen and off.

Previously on Women in the Box: Ethel Mertz, I Love Lucy

One Response to “Women in the Box: Winnie, Topanga, and The ’90s Girl-Next-Door”