Noel: Last week we had the Baroness, a saboteur mastermind orchestrating a spy ring from a U.S. military prison, and she favored sleek, film noir-ish evening gowns and red cloaks. This week, we get Fausta Grables, a German Olympic athlete that has a clever plan to capture Wonder Woman for study. She likes cloaks, too, but prefers dress shirts, ties, suspenders, and pants.

What say you about this Nazi Wonder Woman, Kerensa, and the episode as a whole?

Kerensa: This is by far my favorite episode that we’ve watched so far. I think it made a lot of the feminist tones that we’ve been discussing even more blatant, illustrated the importance of women supporting each other and continued to show the unimportance of Steve. Although, in this episode since we got actual romantic overtones this time, I’m guessing he’s still sticking around.

Noel: I have a feeling we’re only ever going to get two twirls an episode. If it’s any consolation, two shots would be probably be enough to get me twirling. I used to have long hair, so you can go ahead and imagine me transforming into Wonder Woman if you need an extra twirl at any point.

We’re in agreement that it’s a favorite, and I’d say it’s probably the best we’ve watched so far (not that that’s saying much since we’ve only done three episodes). And since you brought him up, let’s talk a bit about Steve. First, I should break something to you: Steve is not going anywhere. He sticks around for the entire season. If it’s any consolation, Steve Trevor is in seasons 2 and 3, but it’s season 1’s Steve Trevor’s son (those two seasons take place in the 1970s), but played by the same actor. His role in season 2 and 3 is different the from season 1. At least in what I can remember.

We’ve talked about Steve as a himbo, and last week Marty McKee chimed in our post to say that we’re never supposed to take Steve too “seriously except lummox as a for Diana to, again, rescue or ask dumb questions.” I do think, from an audience perspective, and certainly we’ve talked about this, that Steve does comes off as goofy and inept, along the lines of Marty’s comment. And in this episode, I think this gets pushed even further as he almost becomes a parody of masculinity as we learn that he was in the Rose Bowl, is able to penetrate the German perimeter even though the British commandos (!!) couldn’t, and he goes off to save Wonder Woman (because Wonder Woman really needs saving).

BUT I feel like the show treats him very seriously. He’s a war hero, a popular icon for American morale, and recognized everywhere he goes. Dude could walk into Cheers in the 1940s and would get a “Steve!” I bet. Even Wonder Woman treats him very seriously (and lovingly). It short circuits the notion of parody for me, and the idea that while we’re not supposed to take him seriously, we also sort of are for some reason. Thoughts?

Kerensa: Only two shots? Dang, Noel, if the twirling counts get higher, you are going to need to work on your tolerance.

But I guess that also means I’m going to have to work on my tolerance for Steve. I agree with Marty that he does from an audience perspective come off as an utter buffoon. Noel, Steve was a serious football player, not just a parody of masculinity. But I think that’s really an excellent way of looking at it. Literally every action of his completely plays into one masculine stereotype or another.

And I agree that the show takes him super seriously. I mean we are supposed to be super invested in the Steve/Diana/Wonder Woman relationship, especially with the finally explicit romantic vibes between the two in this episode. That small exchange at the end of the episode when after they have “defeated” everyone and compliment each other.

“Not so bad yourself.”

Groan. But the googly eyes that Wonder Woman makes at him make it implicit that we are supposed to see Steve as an actual romantic partner for her as well as everything else the show depicts him to be. It’s a weird paradox.  Note: the picture is my notated reaction upon hearing that Steve played in the Rose Bowl. I immediately sent it to Noel.

Looking past Steve, since we will have to continue to deal with him, I’m much more interested in Wonder Woman’s relationships with her lady nemesis (if you can call them that?). I think they are, especially in this episode with Fausta, so much more complex and interesting than literally anything Steve could ever do. What did you think about Fausta?

Noel: I found Fausta to be incredibly fascinating. Here’s a woman who has Hitler’s ear on matters regarding Wonder Woman (also: Hitler watching the Wonder Woman footage for six hours isn’t creepy at all) and she so instantly assumes command of the room that even Kesselman’s aide obeys her orders in that first scene before remembering that he actually needs to check with Kesselman first. She’s an Olympic-level athlete, an she has concocted a pretty solid plan for kidnapping and interrogating Wonder Woman.

It’s the interactions with Kesselman that really sell the episode, though. He’s not wanting to allow this woman to have any control over the operation, he knows how to best interrogate a suspect, and on and on and on. Fausta all but epitomizes gender discrimination in the workplace, dealing with a mid-level manager being annoyed at having the higher-ups telling him he needs to work with a woman. A WOMAN! How dare they.

Kerensa: Agreed completely. Fausta is so interesting especially when she fights back against Kesselman. She’s obviously so superior to him in every aspect and he refuses to listen to anything she has to say because she’s a woman. Ugh. But Fausta, I think totally realizes how terrible these dudes are at first but can’t figure out what to do since she’s so enmeshed in everything. When they try to get Wonder Woman in that warehouse, after the dudes she use fail miserably, she says: “How can I succeed when when they are sightly cowards.” Fausta knows that these guys don’t know what they are doing and that sentiment continues throughout the episode, especially when her and Kesselman speak.

I thought the interaction between Fausta and Wonder Woman was really interesting. I thought it was hilarious when Fausta dressed as her and Steve thought it was the real Wonder Woman because of COURSE he did. But all of Wonder Woman’s democracy=women’s empowerment statements from the previous episodes were really crystallized here. Especially at the end, when Kesselman wants to interrogate Wonder Woman and she will only speak to the “woman who captured me.”

And then when Fausta saves Wonder Woman and Steve and Wonder Woman tells her she’s an example to women all over the world who want to be free. Totally fantastic. I’m super curious to see if this is how Wonder Woman continues to “fight” her lady nemesis because I think it’s pretty fascinating. After that scene where Fausta denounces the Nazis and says she’ll work as a double agent, I was just imagining her and Wonder Woman years and years later getting lunch and catching up and Fausta saying, “Remember that time I was a Nazi agent and tried to kill you?” And the two of them just laugh over their $20 sandwiches.

I guess that’s my weird fan fiction. Do you have thoughts about how things went down with Fausta and Wonder Woman?

Noel: She is very enmeshed in everything. I contrasted her costuming to the Baroness when we started, and unlike the Baroness, Fausta dresses like a man and wears her hair styled up, perhaps as an attempt to be taken more seriously, though her outfit does little to mask her feminine attributes. Even her standing as an Olympic athlete is something of masculine compensation.

But Wonder Woman shows her that she needn’t do all of that, that her power is because of her femininity, not in spite of it. You see how intrigued she is by the notion of Paradise Island and how the women there, including Wonder Woman, “were able to develop our minds and our physical skills, unhampered by masculine destructiveness.” After all the verbal abuse and discrimination — she wasn’t thanked for capturing Wonder Woman, and is instead seen as a “disgusting glory grabber” — Paradise Island’s philosophy seems a tempting one, and if there were a more serialized show, I could’ve seen Fausta heading to Paradise Island, receiving some training, and then launching her own very aggressive women’s superiority movement in the world. 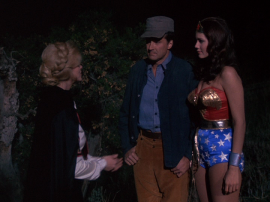 Of course, that wouldn’t happen because Wonder Woman’s real power isn’t in her strength or combat prowess (I love how she tosses Fausta’s henchmen around the warehouse, including Keene Curtis, a favorite character actor of mine) but through appeals to an innate bond between women. Sure, it was a little more passive-aggressively executed in regards to the Baroness and her “unwomanly ways,” but here it’s much more direct appeal, and that’s really exciting and in keeping with attempting to prevent fighting amongst women through bonds of sisterhood.

And that is an excellent fan fiction idea. Mine involves Steve and General Blankenship after the latter wistfully told Etta that if she told him where Steve was that he’d be “tempted to call him.” Maybe their car runs out of gas in the middle of a field, and can’t get any more because Steve is out of gas coupons (and there’s not a gas station anywhere nearby because they’re in the middle of a field) and to stay warm, they have to cuddle. Things happen. S/B OTP 4evar.

What else do you have?

Kerensa: You completely got all my thoughts on Fausta. Noel, it’s like we are the same person when it comes to this show! I’m really hoping we see Fausta again since she’s now working as a double agent.

And I think your fan fiction idea is brilliant, should we start a Wonder Woman fan fiction tumblr?

My final thought was something that you brought up last week–is that Diana is being super sloppy when it comes to her secret identity. Again, like last week, in the final scene she says something, this time literally a word for word statement that Wonder Woman said to Steve. Shouldn’t she be more careful?

Noel: She should be more careful, but I think we can agree that Steve’s just too dumb to put two and two together (thank goodness Steve’s not a Nazi sleeper agent like Brody on Homeland). Non-narratively, I think it’s there to help reinforce the message so that it comes from both Wonder Woman and Diana, but I don’t know that feels super-necessary in the long run.

Next week: “Beauty on Parade” has Diana infiltrating — what else? — a beauty pageant to stop — what else? — a sabotage ring. It also marks the first episode from when ABC finally picked up the series for a season. ABC aired the first three episode we’ve discussed already as specials before ordering the show for an 11-episode season for the 1976-77 season.