We’ve brought back Asked & Answered for a special love-themed edition, brainstormed by Kerensa and Emma.  To quote Kerensa, “we thought that February would be the perfect month for this as it is the so-called month of love (and all that crap),” and the editors agreed!

So for each Friday in February (and one Friday in March), they’ve concocted a TV question related to love, sex, and romance for our writers to answer. The answers will be enlightening and embarrassing in equal measure. We hope you enjoy, and feel free to reply to the question with your own answer in the comments!

This week’s question is: We all have them, but which TV actor or character did you crush on that you now look at and think “Why?!”

Emma: For anyone that has been reading the My So-Called Life discussion pieces here at This Was TV my answer to this question will not be a surprise. For a long time I thought that Jordan Catalano was the perfect crush and then I watched MSCL again and realized how wrong I was. Yeah he looks good and has the perfect ’90s hair and I’m guessing it would be amazing to touch and it also happened to be a time when I was all about grunge and boys that were in bands. He also leans really well. It turns out that teen thoughts aren’t always the smartest, even if we think they are. While a ‘bad boy’ like Pacey has charm, there is a not so appealing emptiness with Jordan that I missed back when I was 14. Angela also thinks that he has a dreamy quality and like Angela I probably wasn’t the best judge of character at this age. Whereas I think Joshua Jackson is rather delicious still, Jared Leto no longer holds this crush worthy appeal; perhaps it is not enough that a guy is in a band (the 14 year old version of me would be horrified at this notion).

Andrew:  For whatever reason I’ve often had a thing for the spoiled, rich girl. It’s like the opposite of the damsel in distress? Is this a thing or is it just me? Anyway, a big one of these in my childhood was Beebe Bluff from Doug. Having a crush on Beebe Bluff is inherently ridiculous- she is both two-dimensional (not just personality-wise, she is LITERALLY two-dimensional) and purple. But there was something about Beebe. Perhaps it was the fact that she wasn’t the can-get-any-guy Patti- she had crushes on both Doug and Skeeter but neither of them liked her back. But perhaps that makes my own crush on her just that much more absurd.

Whitney:  To be honest, I don’t think any of my childhood TV crushes failed to pan out as anything but completely warranted. Incredibly humble, I know, but nothing comes immediately to mind when I think of regrettable decisions in the television category. (Boy bands however, are an entirely different story. Even though I was always a JT girl having a secondary crush on Lance Bass ended up a tad bit awkward at this point.) Whether this was a product of most shows on Disney/Nick/CBS being vetted to a degree where awkward crushes aren’t possible or I just have really good taste is unclear. All things considered, the one person that is a little weird that I had a crush on was definitely Connor from Angel. Yup… Angel’s psycho, murderous, eventually mind-wiped son had a special draw for me.  Maybe its because he was the spawn of one of my favorite Whedon hunks (Boreanaz) or maybe it was because he was such a different piece of the show when he was introduced, for better or for worse, but I always thought of Connor as that cool, rugged teenager who nobody understood. I probably just had the foresight to know he would grow up to be the even less well-functioning specimen of Pete Campbell.

Julie: I think my list of TV character and actor crushes is pretty respectable. George Clooney on Sisters? Who can argue with that? Leo DiCaprio on Growing Pains? Sure. Raphael of the Teenage Mutant Ninja Turtles? Who didn’t love him? Lion-O, the Hound, and the lead singer of Spin Doctors who suddenly got all cute for his Sesame Street music video? Totally normal and not at all disturbing. But where my crush list veers into sad territory is when we go off road and wind up in the backwoods of television — reality TV. A few years ago, I was quite the American Idol fan. It was actually during Season 5 of American Idol that I began my illustrious blogging career. And during that season, the show featured a quirky contestant who broke all the rules and looked a little like a grandpa and whom I believed was the shit. At least in the beginning. Who was that ass kicking, name taking American Idol contestant? Why it was Taylor Hicks, of course. However, as the season progressed and his dance skills did not, my affections for him started to wane, and eventually they dwindled to nothing and I never even felt the urge to buy a Taylor Hicks album. But I may have bought a single or two.

Kerensa: When Emma and I were coming up with the questions for this series, I knew immediately who I would say for this answer, and it causes me deep personal shame.

I had a crush (not JTT levels) on A.C. Slater/Mario Lopez from Saved by the Bell. I mean they are essentially the same person right? For whatever reason, I thought Slater/Mario was a total babe and completely charming.

Now when I see repeats of Saved by the Bell, I’m grossed out by his muscles, the curly mullet and his blatant misogyny. While I love a less-than-intellectual-jock, Slater was just not smart at all and not funny. Oh and that whole being really shitty to women thing.  Also, Mario Lopez himself is a less than ideal crush, if you’ve kept up on your celebrity gossip over the years. I’m fairly certain that some of the Los Angeles smog is airborne with remnants of his sexual dalliances.

Also, who didn’t have a crush on Zack Morris? I’m embarrassed. 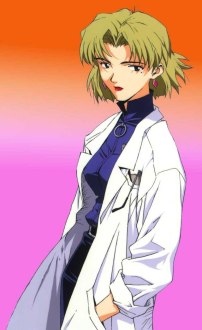 Noel: My selection didn’t even reach “now,” as I realized the errors of my ways by the end of the series. Ritsuko Akagi is the head scientist of sinister organization NERV in the anime Neon Genesis Evangelion. Sure, she was a chain smoker, but she was smart, attractive, didn’t seem particularly keen about sex, and liked cats. Despite being a little cold professionally, she was still supportive of her best friend, Misato Katsuragi, so there was a heart beneath that lab coat. Except much of this isn’t really true. Ritsuko was forever living in her mother’s shadow, including sleeping with the same man, Gendo Ikari, who slept with her mother and is likewise jealous of Gendo’s relationship with Rei Ayanami, a teenaged clone of Gendo dead wife. She eventually destroyed all the other potential Rei clones and then attempted a mass murder/suicide of NERV, including Gendo, but the computer system that ran the facility overruled the self-destruct order (it contained three aspects of her mother’s personality — the woman, the mother, and the scientist — and the woman aspect is the one that chose to override the self-destruct). It turned out that she didn’t even really care when her cat that her grandmother was taking care of had died.

In my defense, everyone on that show ended up being supremely emotionally damaged, and I realized the error of that crush. Doubly in my defense: I wasn’t into Asuka. At all.

Cory: Before you read any further, know that this is about wrestling. I’m sorry that I’m not sorry. In any event, I grew up during the seminal “Monday Night Wars” of professional wrestling, wherein both WCW and then-WWF used scantily clad women to appeal to their primarily teenage male audience. The latter company did this more than the former, which is why Stephanie McMahon, daughter of WWF/E CEO, mastermind, and on-screen monster Vince McMahon, stood out among the crowd. In 1999, a young, innocent-looking Steph masterfully contrasted with the WWF’s cavalcade of fake-breasted blondes looking (or being positioned by Vince) to make onto the cover of Playboy. Stephanie was cute, in a way a real human being would be and the writing helped frame her as approachable and nice.

Of course, by 2001, Stephanie had been through the WWF ringer–she turned into a hateful character, got unfortunate breast implants, and became almost entirely unbearable–and it was a little embarrassing to think about my previous feelings for her. Yet, in recent years, she’s gone off-screen, become a mother, and generally looks like an attractive older woman that I don’t want to immediately roll my eyes at. We’ve been on the quite the journey.

5 Responses to “This Was Television Asked & Answered: Which TV actor or character did you crush on that you now look at and think why?”