The history of queer televisual representation, like all history, is often fraught with representations that because of researcher interest, technological advances and/or problematics of the archive, get included or excluded.  My current projects have illuminated the difficulties of the archive when looking for queer representation in black cast situation comedies. Certainly television itself has historically been a stepchild when it comes to the archive.  Culturally, film seems more important to archive because in the problematic dichotomy of high/low art, film is the high art to television’s vulgar, low art.  Even as the DVD has become a way to memorialize television (primarily because production and distribution companies can create a new revenue stream), and thus, create a kind of archive, there remain historical invisibilities in the archive, which also leads to historical invisibilities in the cultural memory.

This brings me to the current post.  For years, I assumed that the first time gay black men appeared on television was Antoine Merriwether and Blaine Edwards on In Living Color’s  “Men On…” skits.  Then I discovered Eddie Murphy’s Dion Dion on Saturday Night Live.  Both these representations relied heavily on stereotypes that are imagined as “negative” in the gay rights imagination.  These characterizations, performed by heterosexually-identified (and sometimes homophobic) black actors, presented a picture of black gay men that many found offensive because of their reliance on feyness and sexual lasciviousness as the markers of homosexuality.  These caricatures recurred on their respective series, hence, they are more visible in the historical memory and the DVD archive.

But I came across an instance of a representation of black homosexuality in the black cast sitcom that cannot be explained away under familiar tropes associated with villainry or lasciviousness.

The year was 1977.  After five successful seasons on NBC, Sanford and Son ended after star Redd Foxx (Fred Sanford) was committed to star in a variety show for ABC called Redd Foxx.  After contract negotiations broke down between the network and actor Desmond Wilson (Lamont Sanford), he was replaced as the lead character of the new series Sanford Arms.  The series revolves around a cast of characters who run Sanford Arms, a boarding house owned by Sanford and Son co-star Aunt Esther (played by actress LaWanda Page reprising her role from Sanford and Son), who also plays a supporting role on this series.  Sanford Arms is largely an unremarkable show.  It lasted only four episodes before NBC cancelled it because of low ratings; what is remarkable about the show is its inclusion of a gay black character in the four episodes that made it to the airwaves.

In the series’ third episode, “Phil’s Assertion School,” the A-story involves series star Phil’s decision to run a school out of the boarding house that aims to teach people to be more assertive, hence the episode’s title.  The B-story involves Phil’s daughter, who is dating a lawyer named Travis, who is described as harmless, because of his career path (although the retort from Phil, delivered to much audience laughter/laugh track, is that Nixon was also a lawyer).  This is a particularly stark contrast when considering that the first scene of this episode features Bubba (continuing the role he originated on Sanford and Son) cannot calculate the cost of a $12 double room for three nights, even with the aid of paper and pencil.  But the gist is that his career, and the level of education required to achieve such a career, lends a degree of middle class respectability to this character before the audience meets him.  This respectability is particularly important when considering that the proprietors of Sanford Arms charge $7 per day for a single room and $12 for a double room, and in the series’ four episodes that aired, there was never a single occupant in the boarding house.  In other words, the proprietor and workers at Sanford Arms were not getting rich and seemed to occupy the same socio-economic space occupied by Fred and Lamont Sanford — the lower echelons of the socio-economic ladder.  In this way, Travis, sight unseen, is othered by the ways in which he is positioned with and against the other characters in the series. 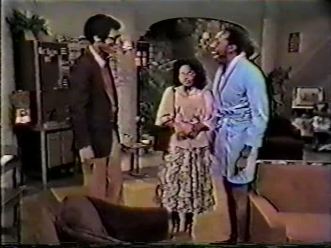 When Travis makes his first appearance in the episode’s second act, Phil seems to like Travis as a suitor for his daughter, Angie.  However, he is most interested in Travis’ skills as an attorney after one of his “assertion school” students threatens to sue him.  After Travis leaves, Phil inexplicably asks Angie about the kind of law Travis practices (rather than asking Travis when he is in the scene).  This scene is where Sanford Arms can most closely be linked to relevance programming of the 1970s.  Led in part by Norman Lear’s All in the Family, relevance television dealt with “issues” of the day and attempted to present clear cut solutions to these issues.  Relevance television was concerned with fictionalizing current events in a way that appealed to the shifting socio-cultural and demographic shifts in America.  Through Angie, the audience learns that Travis is a civil rights attorney who deals mostly with the (imagined) gay community and their fight for rights.  In perhaps the earliest (if not one of the earliest) instances on television, this episode of Sanford Arms connects the black civil rights struggle (hegemonically–and erroneously– understood to have ended in the 1960s) and the gay civil rights struggle.  Particularly important here is that the struggle becomes less problematic in its placement of both struggles onto black bodies.  In the popular imagination (and gay rights organizations certainly do not help dispel this mythology), the gay rights movement is a white male movement. Sanford Arms helps to insert activists of color into the narrative.

However, Sanford Arms handling of “the gay issue” is not all puppies and rainbows.  The script reifies the notion that if one is assisting the gay men and women in the achievement of their rights, then one must be gay.  And while the series firmly operates within the confines of 1970s turn-to-relevance, black cast situation comedies, it is Travis’ gayness that is played for laughs (or at least, it is where the writers/producers believe the comedy is located if they sweetened the soundtrack by adding a laugh track).  In other words, when Phil asks his daughter Angie whether or not Travis is gay, she answers back, “Is Travis gay?” and begins heartily laughing.  Soon, Phil is also laughing as well as the audience/laugh track before Angie reveals, “Of course he’s gay.”  Inexplicably Phil’s laughter turns to tears as the audience “laughs” their approval of Phil’s emotional meltdown.

The next scene works to expose the generational divide between the ideologies held by the younger “hipper” generation verses the ideals held by the older generation.  While Phil and Bubba (who represent the older generation) fumble and stumble to make sense of the changing times, the younger generation turns their teaching against them to expose their inherent hypocrisy.  Phil’s 12 year-old son says that you are supposed to judge people on whether or not they are nice and points out that is a lesson he learned from his father.  While, even thinking about homosexuality as a hypothetical question sends Bubba running from the room.

Ultimately, Phil “comes around” to accept Travis’ homosexuality, but the “acceptance” seems hollow.  What Phil ultimately accepts is Travis’ queer labor.  In other words, Travis is providing a service to Phil that ultimately keeps him out of legal trouble.  In the tradition of the “acceptance” of gay bodies because of the service they provide including hairdressers and interior designers (two go-to professions in early radio, film and television), Travis’ queer body is used for its legal prowess and then narratively discarded, never to be seen again (although in fairness, the series only aired four episodes and shot another four that never aired).

However, even as the series is forgotten by both the DVD archive and, I would argue, the cultural memory, Sanford Arms should be remembered because it featured representation of a gay black man on a black cast sitcom long before doing so was considered fashionable or trendy.  It attempted to move representation away from “negative” stereotypes by using transcoding strategies to make this gay black character as good as, or better than the rest of the members of the cast.  Travis was not fey, he was not utilized as a sassy sidekick, and he had a career that existed outside the realm of the stereotypical professions for gay men in media, although lawyer has now become a new stereotype for professional gay men (see: Will & Grace, Brothers & Sisters and Modern Family).  And while Antoine Meriwether, Blane Edwards, Dion Dion and Luther (from Don’t Trust the B) can provide an image with which some gay men can identify, Travis serves as a counterpoint through which other gay men can see themselves reflected back from television’s looking glass.