Les: Last week’s episode of Star Trek: The Next Generation showed us two very poignant uses of the ship’s holodeck technology. In the first instance, Picard put Data through a performance of Henry V as a tool to teach the android something about the “human condition,” observing the language and relationships of Shakespearean drama. The second saw Data using the technology to attempt to put the Romulan defector “Setal” more at ease by replicating the landmarks of the Romulan homeworld, only for the sight to jar the latter into ra ealization of how much he had given up and how he couldn’t let it all be in vain.  Red Dwarf‘s first use of the technology? To show us Dave Lister banging the hell out of a film noir femme fatale—or rather, showing us what it looks like to anyone who’s not sharing in his virtual reality.

That’s just one of many ways that Red Dwarf is a much different entity than all the other installments in this space opera roundtable. While the other shows we’ve watched have used space travel as a device for telling stories of grand adventure or human struggles, Red Dwarf is a show that uses sci-fi tropes and situations for purely comedic purposes. Dave Lister is the last human alive in the universe, awoken after three million years of suspended animation, accompanied only by a hologram of a long-dead crewmate, a mutated life form and a service android, but there’s not an ounce of pathos or meaningfulness to his journey. Rather, this is a show about four people who can’t stand each other and are just bouncing through the galaxy, getting themselves into all sorts of scrapes and periodically abusing each other.

And I enjoyed it for that very reason. Possibly it’s my overwhelming fondness for British comedies, or possibly after eight-plus installments of this roundtable it’s nice to see a show deflating some of the loftier conceptions of space travel, but this was a fun change of pace from everything we’ve seen to date. I enjoyed the way Lister subverted the idea of the space opera protagonist by being less of a Captain Kirk and more like Roy from The IT Crowd, and I also enjoyed the cowardice and fussiness of Rimmer (and found it quite delightful that his hologram state was given away by the big “H” on his forehead was delightful). And the aesthetic has a cheapness about it reminiscent of the original Hitchhiker’s Guide to the Galaxy miniseries, or “The Ark in Space” from Doctor Who, that’s so endearingly and indelibly BBC.

The episode’s conception—a Wild West simulation inside the mind of Kryten, where a computer virus has taken on the form of the Four Horsemen of the Apocalypse—doesn’t have much if anything to do with space travel, and is mostly reminiscent of the TNG episodes where the holodeck malfunctions and traps the crew in a simulation. (In fact, just a year before, TNG explored a similar theme in “A Fistful of Datas.”) But even without much context with the show, there’s a lot to recommend it from a comedic standpoint—Cat’s Three Amigos outfit and associated dance, Rimmer’s attempts to be tough and then failing miserably, and Kryten doing his best John Wayne impression as the drunken sheriff. I particularly enjoyed the video game aspect of how they select their abilities, the sense of confidence as they grew more comfortable, and the humor when those abilities were yanked away, the crew’s only recourse to try yanking the virtual reality monitors off. Proving, yet again, how ridiculous it all looks to someone who can’t experience it.

Cameron: Sci-fi comedy is a rather small collection of works, so when something pops up that’s cut from that cloth, I tend to take notice. And Red Dwarf certainly doesn’t disappoint for weirdness. The thing that most struck me about the episode was the use of the virtual reality machine to explore genres of film, in this case film noir and, later, Westerns. It’s almost Community-esque in its self-awareness of the artifice of the virtual reality, but then going along with it anyway in order to achieve an objective. It’s clever, and it certainly doesn’t lack for laughs.

I also really enjoyed the aesthetics of the episode, from the design of the space ship to the barely-there attempts at the film genres being played with. Contrasted with that is the 90s video-game design of the character selection screen, which makes the VR seem more like a video game, which is also just so 90s it hurts. But that aesthetic design, plus the characters that inhabit that aesthetic, added up to a charmingly nerdy half-hour of television. One of my favorite quotes about Community from that show’s fandom is that the show is about “nerds playing nerds pretending to be normal people”; that’s absolutely the spirit of what Red Dwarf is trying to do here.

Heather: Meh. Not being familiar with Red Dwarf, I didn’t know what to expect. I didn’t hate it. But I certainly didn’t love it either. I didn’t start enjoying the episode until seventeen minutes into it. (Yeah, I kept checking the time.) It’s one of those shows that I might have enjoyed as a kid, but with the extraordinary amount of television available now, thanks to Netflix and Hulu, Red Dwarf isn’t the kind of series I’d make time for. If I want quirky, off-beat British comedy, I’ll take Spaced. Or Black Books or The IT Crowd.

In regards to its science-fiction genre, I agree with what has been said already. It was interesting to watch a show that pokes fun at traditionally dramatic, sci-fi tropes. I found the Western setting particularly absorbing, having just rewatched “A Town Called Mercy” (Doctor Who, S7E3). The notion of “frontier” is obvious in both Westerns and science-fiction space travel, and I wonder how much of modern science-fiction is produced out of a nostalgia for wild and rough territories. The expansive unknown and accompanying sense of adventure. It’s also amusing to see Britain’s fondness of the Western. Here in “Gunmen of the Apocalypse” and in both “The Impossible Astronaut” (Doctor Who, S6E1) and “A Town Called Mercy” you’ve got the BBC attempting to depict the Wild West, complete with gunslingers, whiskey and ten-gallon hats. Sure, it’s an excellent vehicle to poke fun at Americans (the drawls! the spitting!), but I also wonder if there is a sense of the exotic to it all. Britain has this gloriously ancient and deep history; it doesn’t really have a lot of physical space. So the notion of rugged, expansive land could be—and is—romanticized.

Lastly I have to voice my disappointment in the all-male cast, particularly when science-fiction has historically offered strong, kick-ass roles to women. Out of all the genres on television (and novels), sci-fi has tended to offer opportunities to women not afforded in other genres. From the 60s onward, women were given roles as captains, scientists, astrophysicists, pilots and chief medical officers (to name a few). To not have a female regular character seems to be a gross oversight. And I know Kristine Kochanski is introduced as a main character later in the series (season 7!), but it’s not enough. 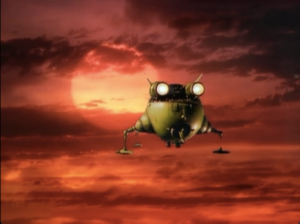 As a reminder, we’ll be sampling a different series every week for the next two weeks:

2 Responses to “Roundtable Review: Red Dwarf, “Gunmen of the Apocalypse””