By Cory Barker and Myc Wiatrowski

Cory: Myc, guess what? It’s time for two more episodes of Simon & Simon! Yay. We weren’t too impressed with the show in our chat last week, but it’s safe to say the second episode we watched (the show’s fifth) was stronger than the truly mediocre pilot. These two episodes are from even later in that first season, so I had hopes that they would be even better. For me, that’s only barely the case. We promised ourselves we wouldn’t beat a dead horse if there wasn’t anything too valuable to discuss. Well, is there?

Myc: These episodes were a great improvement. The show is still supremely mediocre, but it feels like they started to find a groove. The comedic aspects we talked about last time are even more noticeable this week. Most pretense of drama is gone in favor of creating a more farcical show. This is an improvement in the tone of the program.

Cory: Your point about the comedy is spot-on. I wouldn’t go as far to say that these episodes are legitimately funny, but the show is better-equipped to get good mileage out of the brothers’ silly plight. It’s an extension of what we saw in last week’s episodes, particularly the second one, where despite their stereotypical masculinity or machismo, these guys (Rick more so than AJ, for sure) are barely successful and generally dopey. Rick is never prepared for much of anything and while AJ is better put-together as a human being, his skills don’t necessarily overcome the shoddy circumstances the two of them often find themselves within.

So, the show is no longer serious at all. The cases and stakes don’t really matter; they’re present so the show can move from one minor comic incident or set-piece to another. How do you think that played out in the first episode we watched this week?

Myc: From the very opening of “Earth to Stacey” we’re given a lot of comedy. Rick is lying in bed with his dog while he talks to the animal like a woman; meanwhile his truck is repossessed. Classic stuff right there. Not actually funny, but clearly trying to be. Then Rick needs a job so he can get his truck back, so he snakes a wealthy client from Myron across the street. And comedy gold ensues. (But not really.)

This episode reminded me a lot of “Beauty Knows No Pain” from Magnum: there’s the ditzy jilted bride sweeping into town looking for the missing man who stood her up at the altar. It’s a silly story and Rick and AJ play right into it. Rick keeps on trying to extend the case to milk more money out of the wealthy Stacey, while AJ can’t wait to end it. This episode is all about subverting the expectations of the detective genre. There’s not a “real” mystery and everything just falls into the brother’s laps while Stacey drives them crazy until the very end when her check bounces.

I guess it was good for a few half-laughs. 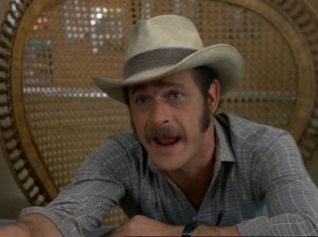 Cory: It’s no surprise to me that Rick is the stand-out character of the show. Gerald McRaney obviously had a career after this and if Jameson Parker did, I don’t know much about it. What I enjoyed about “Earth to Stacey” is how much it emphasized that Rick’s life is a mess. He cannot pay his bills, he loses his truck and the only reason he’s interested in this case is for the additional money—and really, just so he can get the truck back. We’ve seen him complain about the pay before, but this episode takes it one step further. So not only is he borderline incompetent at his job, but he mostly knows it and doesn’t totally care because it’s his best way to pay the bills. He’s a screw-up, plain and simple. And I appreciate that the show acknowledges and plays with that fact instead of trying to pretend that he’s really anything else. He’s not particularly heroic, or smart, or skilled–he’s just a dude who needs money.

And I think this case further reinforces how lousy these guys are at their jobs. Even though AJ wants the case to be over, he also goes along with the investigation, but doesn’t do much of a job in solving it. You’re right to make the comparison to the Magnum, P.I. episode that we saw a few weeks ago. I think it speaks to how shows like this enjoy injecting a bit of feminine disruption into overly masculine situations. Both Magnum and Simon & Simon recognize that their male characters aren’t infallible alpha males, so when a smart—or perhaps just troublemaking—woman gets involved, the men can’t really seem to handle themselves especially well. Stacey provides that disruption here and the men are never really in control, either of her or the case. While it’s not a novel construct for a story, especially when we’ve seen it twice in three weeks, it’s effective. Thoughts?

Myc: I don’t want to denigrate the career of Jameson Parker. I think he’s a fine actor, but he was shot in the early 1990s and that physical and psychological trauma probably cost him his acting career. But I completely agree with everything else you’ve said. I’ve really noticed something over the past few weeks. We started these shows to take a look at 1980s masculinity and there is the perception that these shows were largely very traditional in their representations of masculinity; that’s why we picked them. However, outside of The A-Team that hasn’t been exactly true. Of course to an extent Magnum, P.I. and Simon & Simon have their moments of hyper-masculinity, and we’ve talked about that. Yet a large portion of these episodes have been built on creating traditional models of masculinity only to subvert them. Magnum, Rick, and AJ have really been the butt of the joke. It’s clear they’re still the heroes, and that they are really the only ones who can save the day, but they’re still largely screw-ups. They’re sort of comedic-traditional heroes. They are the standard man-of-action heroes like James Bond or Dirty Harry or Indiana Jones — they are the heroic supermen who vanquishes their foe(s), proves their manhood, restores the moral order, defies and then saves society, gets the girl, and takes their seat at the pinnacle of the cultural hierarchy. However, they’re also the whipping boy . We laugh at them, not with them.

Cory: Oh gosh! Thanks for doing research and making me look like a fool. That’s tough to hear. Though, McRaney did better things on and after the show.

But that’s beside the point. I’m glad you took the chat where you did and I totally agree. The perception of these shows is one thing, but how they actually execute stories and construct characters is a little different. In some ways, shows like Magnum get to have their cake and eat it too. Magnum is tough enough and cool enough that he can still represent some of the ideal traits of masculinity, but also can become the butt of the joke in a way that deconstructs those ideal traits. With Simon & Simon, and with Rick in particular, there isn’t as much time spent showing us how successful or competent as there is time spent on showing us how much of a goofball he can be, but the theory is still mostly the same. It’s a pleasant surprise for those of us unfamiliar with these shows, and even though Simon & Simon is still not a good show, it’s more…interesting than The A-Team.

What about the second episode, the season one finale? What stood out to you there? 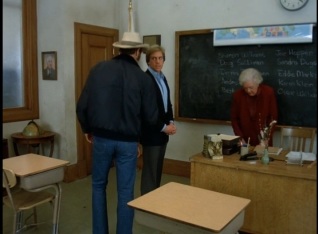 Myc: The thing that struck me immediately was how similar it was to another episode we’ve already discussed, The A-Team‘s “Children of Jamestown.” It really is odd the homogeneity in storytelling that we get across the various series. This is the first episode we’ve watched that alludes to Rick’s past in the military, and it takes itself a little more seriously than “Earth to Stacey” did. The pretense of this episode is ridiculous: the brothers volunteer to track down an old classmate for their high school reunion because it means a great deal to their former teacher. It’s laughable. I thought the scenes where the brothers are trying to infiltrate the survivalist cabal were pretty interesting. And there’s some comedy developed from the old school teacher. I actually thought it was funny when the Simons had the FBI call their teacher into the office to verify their story (But only after the feds gave her a strip search first! Comedy!). Overall, this was a well-assembled episode, but still fairly forgettable. It didn’t do a lot for me in terms of the themes we’ve discussed. Did the finale add anything significant for you?

Cory: Well, one thing I found interesting about the episode is how it was really two different stories. The first half of the episode featured more comedy, some of which worked for me. Rick being embarrassed about his various high school troubles played nicely into the character’s shaggy dog mentality and McRaney played those notes well. The sequence with the team going through old yearbooks made me chuckle, and I can appreciate the awkward feelings that come with thinking a former teacher holds something over or against you. But the second half of the episode was a completely different beast and the kind of beast that the show doesn’t do particularly well. As we noted, Simon & Simon works better as an overt comedy. Attempting to drain any tension, drama, or emotion out of Rick’s time in the war or the damage it did to other people isn’t a color that looks good on the show. I found myself a lot less interested in that version of the show, especially in light of an episode and a half of decent, lightweight fun.

Ultimately though, this episode is a fitting way to say goodbye to our brief time in San Diego. It’s funny in spots, ribs the lead characters in proper fashion, and then mishandles scenes meant to evoke more intensity or seriousness.

This post is part of our multi-week exploration of 1980s uber-masculine American action shows. Here’s the upcoming schedule:

2 Responses to “Team-Up Review: Simon & Simon, “Earth to Stacey” and “Tanks for the Memories””