No Wonder Woman this week! With Kerensa at SXSW, I decided to take a look at the only other place where we haven’t looked at Wonder Woman on TV, and that’s the animated series Justice League (Andy and I watched some of Super Friends a while back). I selected two sets of episodes from the show’s first season that focused on Diana, with “Paradise Lost” up first. I’ll write about “Fury” next week. I could’ve included “Maid of Honor” from Season 2, but I feel like that one stops being a Wonder Woman story in the second half, but if we ever need a break from Wonder Woman again, at least there are some options.

In any case, “Paradise Lost” finds Diana returning home to Themyscira after 8 months away (in the pilot movie, she left to go fight invading aliens with the other heroes who would become the Justice League without her mother’s permission) only to find her Amazonian sisters and her mother turned to stone. Felix Faust, one of DC Comics’s many magical characters, is the one who managed to take down an entire island of women warriors using only a Medusa medallion and all because he wants to free Hades from the underworld, the gate to which is on Themyscira.

The story itself pretty thin, but then many of the episodes in the first season of Justice League are. Turns out that Faust needs a key to unlock the gate, and in exchange for the lives of the Amazon, Diana agrees to retrieve the other pieces of it that have been scattered about the world. So the first episode ends up being something of a fetch quest, where Wonder Woman wrecks a museum to get the first piece, Flash and J’onn get another piece from some Aztec or Mayan temple and fight a big fire-breathing snake, and Diana and Superman find the last piece underneath a mall, but it causes some sort of illusion that causes the two of them to fight each other because they see the other as some sort of demon. And that’s the first episode.

The second episode isn’t much meatier as the those characters plus Batman (who did research on Faust) head off to Themyscira and try to get the medallion from Faust, but he ends up getting the key and Hippolyta and freeing Hades, and the heroes fight him and his skeleton-zombie army, and then Diana destroys the key (why Hippolyta didn’t say this before Hades summons an undead horde is beyond me) which in turn sucks Hades back into the underworld. Hurrah!

So, yes, it’s not the most compelling or even really that interesting pair of episodes. But I selected it for a few reasons that do offer glimmers of interesting ideas that just aren’t really explored in Joseph Kuhr’s script (Dan Riba’s direction is top-notch as always). The first and foremost is that Diana is banished from Themyscira following the events of the episodes since she brought a contingent of male superheroes with her, and men aren’t allowed on Paradise Island. Sure, Hippolyta says “outsiders” at the end of the second episode but in the first part, Diana notes that men aren’t allowed on the island. Diana was fully prepared to retrieve the key parts by herself, but chooses to break the law of her homeland to save her family with the aid of her friends.

She’s fought alongside these men (along with Hawk Girl and John Stewart, neither of whom appear in this episode) for nearly a year, and has realized that man’s world is not nearly as bad as she once may have thought (though this attitude will be a bit different in “Fury”). The four other heroes who help her do so with a thought to their own well-being, and Superman is the one who encourages her to return home and make amends with her mother. But it simply doesn’t matter. The law and the beliefs of the Amazon are as unchanging as the Amazons were when they were trapped in stone.

A similar undercurrent exists in the 1970s Wonder Woman where Diana has learned that the outside world isn’t as horribly destructive as Hippolyta would have had her believe, that there is some goodness in man’s realm. Steve Trevor and the United States, after all, seem a much better option than the Nazis, and certainly provide more opportunities for women than the Third Reich apparently does. But concerns about a corrupting influence color Hippolyta’s reaction to Diana’s continued presence in the U.S., as well as Drusilla’s desire to remain there. There’s a largely unstated risk about Diana becoming too comfortable with the ideologies of patriarchy, especially in the most recent pair of episodes Kerensa and I discussed, as Diana pushes against Hippolyta’s desire to try and reasons with the Nazis, advocating force instead, a very masculine idea it would seem. 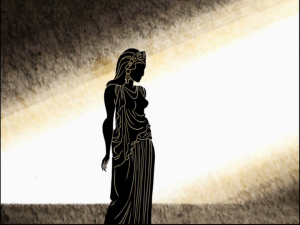 “Paradise Lost” also provides an origin of sorts of Themyscira, and may explain its anti-male laws. Hippolyta carried on an affair with Hades and unwittingly abetted him in his release of the Titans in an effort to overthrow Olympus/take over the world/something. When this plan failed, Hades was cast into the underworld and the gods charged Hippolyta to essentially be his warden, hence why the gates to Tartarus are on the island. It’s wonderfully dramatized in the style of Greek pottery drawings (seriously, it may be one of the highlights of the first season, and it’s like a 20- to 30-second sequence), and it’s easy to interpret this tale as one that explains Hippolyta’s bias against men. The show never spent enough time on Themyscira to outline why there’s a No Men policy on the books (unless I’m forgetting something, and I could very well be), but the betrayal of Hades provides possible reason enough.

But I’m not completely comfortable with this idea. It reduces Hippolyta to a jilted lover, and by extension the ideologies of the Amazons are the result of that. It has less to do with the innate power and strength of women and more to do with that men are just sort of awful. Yes, the 1970s Hippolyta more or less makes the same case — that men are terrible — but it’s not hinted as being derived from the world’s worst break-up. It’s a less…positive spin on the Amazon message.

Next week, we’ll see an even more less-than-positive spin on the Amazon message, but thankfully “Fury” is a little more willing to interrogate things, even if it makes the Amazons into straw feminists. 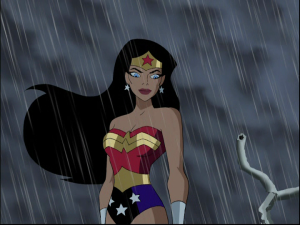 One Response to “Review: Justice League, “Paradise Lost” Parts 1 and 2”