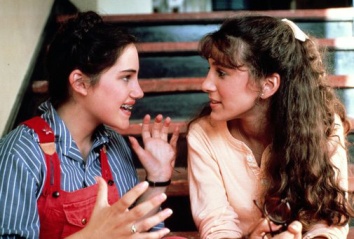 When you grow up as a “nerdy” girl, you don’t have a ton of media aimed at you. As much as I love teen television, a lot of it focuses on the abnormally gorgeous, minorly talented and unfortunate to peak at seventeen types.  When I watched Square Pegs, I was surprised to see that it catered to none of the typical teen demographics; it focused on girls that fell in the in-between category. Square Pegs aired on CBS in 1982-83 for one season until it was canceled. Created by Saturday Night Alum, Anne Beatts, The show follows teen girls Patty Greene (Sarah Jessica Parker) and Lauren Hutchinson (Amy Linker) as they navigate their freshman year at Weemawee High School.

While we have no basis on the status of Patty and Lauren’s friendship, the show establishes them as close friends beyond their new trappings of high school life. This feels especially apparent in the opening credits of the show where we hear dialogue between Lauren and Patty about their freshman year.

Lauren: “Listen. I’ve got this whole high school thing psyched out. It all breaks down into cliques.”

Lauren: “Yeah, you know. Cliques. Little in-groups of different kids. All we have to do is click with the right clique, and we can finally have a social life that’s worthy of us.”

Patty: “No way! Not even with cleavage.”

Lauren: “I tell you, this year we’re going to be popular.”

Even though Lauren and Patty haven’t even been involved in the nuclear warfare known as high school, Lauren already knows the ropes—she knows what it’s going to entail. Not actually becoming friends with people—it’s about becoming a part of the right group—the construction of popularity. In the episodes I watched (I liked it so much I just kept watching), Lauren is always behind their plans to achieve popularity usually using Patty as the catalyst—whether that’s using Patty’s seemingly responsive senior crush or her starring turn in the school musical to leverage their popularity. Lauren seems to think that by proxy of Patty, she too will be popular.

Patty, on the other hand, has little to no interest in popularity. She’s content with her friendship with Lauren and the two dudes, Johnny and Marshall, who are always with them. But Patty recognizes this slippery slope of popularity in a way that Lauren doesn’t. She knows that no matter what they do to be popular that it’s merely fleeting. In the episode “The Stepanowicz Papers,” Patty says as much when advising Lauren on her doomed crush on the sexy janitor. “You are always so worried about us being ‘in.’ What about your plan to date only highly desirables like Prince Andrew of England? Well this is all Jennifer and her crowd have to hear and you can forget being popular ….”

The striking thing about Lauren and Patty’s quest for popularity is that they aren’t unpopular per se, they are just there. They interact with Jennifer and her “bad-boy” boyfriend, Vinnie and Jennifer’s best friend, LaDonna. Interestingly the things that both Lauren and Patty are insecure about–glasses, braces, packed lunches, being smart–are the things that simultaneously get them teased and noticed. While the teasing from Jennifer and LaDonna is mild at best (symptomatic of the time frame?), there are still moments when common ground is found. When Patty and Vinnie end up starring in the school musical together, Jennifer finds Lauren at the diner. She begins their encounter with “Like don’t think this is going to be like a regular thing,” but she’s there asking for Lauren’s advice about Vinnie.  Despite Jennifer’s teasing about food getting stuck in Lauren’s braces or Patty’s lunch box, those are the same things, mainly for Patty, that attracts dudes to the pair.

A constant trope in teen television (and movies) is that the nerdy girl has to remove her glasses, change her personality and wardrobe in order to snag the attention of the jock or the school president or that unrealistic guy who is all of the above. There is never the acknowledgement that maybe part of the appeal of the nerd girl is the nerd part.

Lauren and Patty’s constant nerdbro companions, pseudo-comedian Marshall and New Waver Johnny, are obviously attracted to the pair from the get go. They ask them to the dance in the pilot episode, which Lauren agrees to for them mainly so they have someone to drive them. But the friendship continues throughout with them becoming a foursome that has their own specific booth at the diner. However, Johnny and Marshall’s affections are always pretty overt, they’re also somewhat hidden in a veneer of silly jokes.  In the context of the teen show, we are unsurprised that Marshall and Johnny are attracted to Lauren and Patty–in the hierarchy of popularity it makes sense. But the insecurities of Lauren and Patty, the same ones that Marshall and Johnny clearly embrace, are also noticed by other guys in the show.

In the pilot, Patty mortified by her packed lunch, begins flushing it down the toilet every day and just doesn’t eat anything. This finally catches up to her, in a fevered 15-year-old daydream we probably all had. Due to hunger, Patty faints on Larry Simpson, a totally ’80s sexy, popular senior and he takes her to the diner to get a burger. Even though we later find out Larry has a girlfriend, all the things he mentions that attract him to Patty are exactly the things she’s insecure about. He mentions her “unique mind,” likes her glasses and he packs his own lunch too because he’s saving for college. And it’s not just a fleeting attraction (unlike many others, but we’ll get to that), after their dance and kiss, in episode 15 “It’s Academical,” the two are reunited by being on a quiz team together. He’s not with his college girlfriend anymore and is completely single. Patty’s super paranoid about her academic prowess around Larry, so she takes the ill-advice of Lauren, who tells her to dumb it all down.  Larry can automatically tell that something is going wrong and Patty, with her refreshing honesty, admits what she’s done to him. Guess what? Larry likes Patty because she’s smart–that’s also the reason why he went out with his ex-college girlfriend. Even though the two don’t get together, at least in the episodes I watched, Patty’s desirability amongst the popular, cool dudes wasn’t a fluke.

Patty stars in the school musical alongside, Vinnie, popular bad-boy of the freshman class in “A Cafeteria Line,” a seemingly inappropriate high school musical, written by their drama teacher about a student who has an affair with their drama teacher.  Everyone’s surprised when Patty snags the lead role and Vinnie rather smarmily acknowledges it by asking Patty where she’s been hiding her voice. The two have to share a kiss in the musical and post-kiss, Vinnie is driving outside Patty’s house honking. He wants to do something “romantic” with Patty, who responds with “not before marriage,” but he’s really talking about showing her his childhood paper route. Vinnie’s tour is obviously terrible and Patty seems super bored by it. Vinnie of course goes back to Jennifer, reinforcing the hierarchy of popularity and what he’s “supposed” to like in high school as a popular dude.  Square Pegs negates the idea that in high school attraction is relegated within one’s group or perceived level of attractiveness. And this is clearly a judgment, especially upon women, that transcends teen television into the larger culture. If you read critiques of this season’s Girls many discuss that a guy that looks like Patrick Wilson would never sleep with a woman that looks like Lena Dunham–if you are a woman who doesn’t fit into a stereotypical societal standard of beauty–this is what you will hear. Square Pegs’ sly nod acknowledging the desirability of being a nerdy girl–especially in a teen show is completely subversive.

Even though these encounters serve a specific purpose, they also are extremely fleeting and as with the majority of teen crushes feel like the most passionate life or death, Romeo & Juliet situation.  That’s seen in Patty’s crush on Larry. Even though she broken the barrier of actually talking to him, every interaction is extremely dramatic, always as if it’s the last. After Patty finds out about the girlfriend, despite the kiss from him, she tells Lauren: “I hate myself. I wish I were dead.” Lauren’s response: “How romantic!” And if the reciprocal crush is dramatic, the illicit one has it beat.

In “The Stepanowicz Papers,” a sexy janitor catches the attention of Patty and Lauren. Patty describes him as “dazzling,” wondering how long she can look at him without going blind. However, Lauren becomes obsessed with Steve, who is filling in for his father who just had a heart attack. She obsesses over every detail of his body–his biceps, his dimple, his hair. Any interaction she has with him is an event to analyze. Lauren memorizes his schedule so she can run into him, steals wood shavings from his office and makes a huge binder documenting it all. Lauren’s beyond embarrassed when the popular kids read her file on Steve. When she’s ready to admit her feelings to Steve, he’s already gone.  And in another ego crusher, he doesn’t even remember her. Lauren feels miserable and dumb about Steve but she has Patty to help her get over it.

Square Pegs shows the importance of female friendships while slyly deconstructing popularity, what’s considered desirable and showcasing the utter angst of crushes. While Square Pegs only ran one season, you can feel its influence in shows like MTV’s Awkward, that highlight intelligent female characters who have deep connections with their best friends and don’t need to take their glasses off to get the attention of the jock or anyone else.

Next month, I’ll be looking at Fast Times, the TV show “sequel” to Fast Times at Ridgemont High.

Kerensa Cadenas writes for Women and Hollywood, Forever Young Adult and Bitch magazine. She was the Research Editor for Tomorrow magazine. You can find her other published writing at her website. You can find her on Twitter reporting about the douchebaggery that happens in Los Angeles coffee shops.