Noel: I think this may be the most straight-forward of episodes we’ve had so far, though I enjoyed it a good deal more than Wonder Woman fighting a gorilla. But let’s talk about the obvious reason to derive enjoyment from “The Pluto File”: Robert Reed, MR. BRADY HIMSELF, as a dapper mercenary…who happens to have the plague! 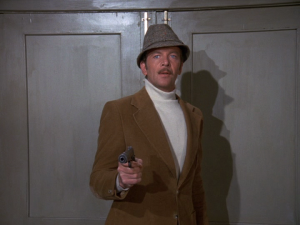 Kerensa: It really was. It was much better than last week’s episode, but I still felt kinda meh about it.

He was SO dapper! And so many hats in this episode!

What were some things that stood out for you?

Noel: Well, obviously, Reed stands out a lot. As I told you when we were discussing the episode before we watched, I never really watched The Brady Bunch all that much when I was younger when it was on TBS seemingly every other half hour when The Andy Griffin Show wasn’t on (it was tough growing up in the metro-Atlanta area and not liking TBS all that much). But through sheer cultural osmosis, you get to know Reed’s performance on the show, and he’s very much the anti-Mike Brady here with the vague Euro trash-ish accent (certainly not Irish!) and the (obvious) delight he takes in hamming it up throughout the episode. If it weren’t for him, I think I’d be more firmly on the side of feeling “meh” about it.

I will say that the plague element felt sort of ridiculous. Not that it couldn’t happen but that it seemed so…excessive, really. It became a handy way to identify suspects and provided a couple of narrative shortcuts, and was definitely sort of in that Golden Age comics vein of “and the kitchen sink!” in plotting, but it sort of cluttered up the episode at the same time. But in an episode where the bad guys are causing earthquakes essentially using dynamite (the technology behind the science there was wonderfully vague) in an effort to blow up an atomic weapons bunker, it feels silly to single out the plague as the element that felt like excess.

What led to your meh feelings about the episode?

Kerensa: I was never a Brady Bunch person, either. But he was pretty funny and very committed to the over the top-ness of the character.

The plague thing was SO RIDICULOUS. When it came up, I was like “where the hell did that come from?” I agree that it cluttered the episode because half the time I was like what thing should I be worrying about more–the plague or earthquakes? A side note on the earthquake plot: that’s actually kinda terrifying to me–a man-made earthquake?! Earthquakes are my least favorite thing EVER. Granted, I am clearly not living in the correct place in order to avoid them, but anytime and earthquake was mentioned I couldn’t handle it. 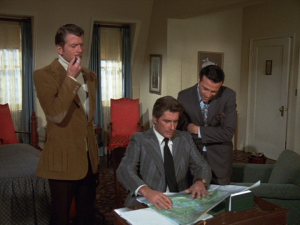 I just couldn’t get into the episode I guess. One thing I was thinking and I recognize how terrible this sounds–but I always find the lady villains so much more interesting. Anytime we have a dude, I’m like “oh it’s another white dude with a power seeking agenda.” SNOOZE. And especially on this show, I’ve found the women Wonder Woman goes against much more interesting and complex than their male counterparts. But as a whole, the convoluted, overwrought nature of the plot just didn’t do much for me. Although, I will say the hat game in this episode was on point. All the hat-loving contributors of This Was Television would be proud.

Noel: Let’s talk about the dude villains, and Falcon in particular for an example. I think there would be a lot of value in them because, like with our lady villains, there’s an opportunity for them to change their stripes, to hear Diana’s message, and become better. Instead of sort of preaching to the sisterhood choir, albeit a very important choir to preach to, men hearing her message would be another blow against patriarchy, and this time creating a male ally.

The episode makes a gesture towards this as Falcon begins to succumb (finally) to the plague he’s been passing around like a bong the entire episode, but it’s too half-hearted to mean all that much. There’s not a real sense of reform or realization of the error of his ways. Basically, everyone needs to be Fausta is what I’m saying.

Also: I don’t think there’s a good place for you to live re: earthquakes. I mean, tremors seem to be cause by natural gas fracking these days. Just can’t escape ’em.

One other thing that stood out to me, and that I wanted to get your opinion on, was Diana’s intellect. She’s shown doing complex scientific equations in this episode, much to the surprise (and seeming respect) of Dr. Warren (played by Hayden Rorke, who portrayed the long-suffering Dr. Bellows on I Dream of Jeannie). Super-intelligence isn’t one of Diana’s normal powers (though she did have it at some point — as did Superman, actually), and it’s certainly not one that appears a lot. What did you think about it showing up here?

Kerensa: I love this theory about how the male villains need to hear Diana’s message. And duh, obviously, the patriarchy is boring. But do you think we we will ever have a male equivalent of Fausta in this show? Cause I don’t think so.

I think the way that the women villains are framed is that it’s always SO apparent how the power structures are automatically against them–by being shouted orders at, undermined, etc. and the male villains don’t have that even if they have terrible plans, are completely stupid, etc.

Also, I miss Fausta. Can she come back?

And that troubles me re: earthquakes. But at least I have good weather if I end up dying in an earthquake.

I can see it as being plot convenient for this episode. I guess I always assumed that Diana’s super intelligence was there, but she was kinda keeping it on the low-down. It’s easier for her to operate around Steve and within her job probably by not doing complex scientific equations. I know that sounds terrible, but I mean I feel like she always knows what is happening before Steve gets it and she always nudges him in the right direction. But I don’t necessarily know if it will appear in the way it has in this episode unless it’s necessary to the plot–what do you think? 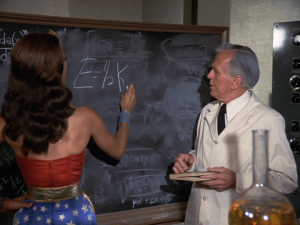 Noel: See, if this show were made today, Diana and Fausta would be teammates who butted heads but still got along to achieve their missions. And it’d be awesome. Or they’d be arch nemesis, but with lots of respect for each other. But then I don’t think I’d have bothered a secret identity for Diana, either. But I’m not making the show. Sigh.

The sudden super-intellect was plot-convenient, but I liked that she on top of being super strong, good with bullets and bracelets, and an expert lasso-er, she’s incredibly smart. Yeah, not showing it as Diana is sort of horrible (damn you, 1940s setting!), but I like that it’s a positive representation. How many women on TV are generally depicted as smart and attractive? I mean, I can only think of Felicity on Arrow and Mouse on The Carrie Diaries, though neither of them are leads, either…

Kerensa:  Oh god that would be amazing. I’m in an LA coffee shop right now, I’m sure there’s someone sitting around to “pitch” the idea to. JK.

Yeah, it’s not something you see super frequently–then or now. Which is so depressing. But I think Bel on The Hour (RIP) was shown as being intelligent and super sexy and she was the lead character. There are some new shows that I haven’t got the chance to see (i.e. The Americans) that look as if they could portray their lead woman character like this but I’m not sure. Can you think of any others? I can’t really. Smart chicks seem to always be relegated to being the sidekick…

Noel: Well, there’s Carrie on Homeland, but her intellect is balanced against the bipolar, and while I’ve only seen the first season, it showed her bipolar-ness and intellect being connected — moments of inspiration and all that.

Any thing else on the episode from you?

Kerensa: I may get killed for this, but I haven’t watched Homeland yet. I’ve seen the first 5 episodes. I KNOW INTERNET, I KNOW.

In closing, I guess I’ll wish for more awesome lady villains in our future episodes cause all these dudes are really just not doing it for me at all.