Over the past week, I’ve been slowly working my way through the wide-ranging contents of Shout! Factory’s five-DVD collection The Incredible Mel Brooks, a retrospective covering his entire hit-or-miss-but-averages-out-to-be-pretty-great career. There’s a lot of terrific material about Brooks’s early funny movies, his later unfunny movies, and his 2000-Year-Old Man comedy records. But here at This Was Television, we like to focus on the third word in our name, so today I’m going to discuss an obscure piece of  Brooks’s TV career – the failed 1963 sitcom pilot Inside Danny Baker.*

(*The pilot’s director was Arthur Hiller, who would go on to have a distinguished career of his own, directing hits like Love Story, Silver Streak, and The In-Laws.)

The title character (played by Disney veteran Roger Mobley) is a laid-back 12-year-old with a dentist for a father, a bespectacled sidekick named Eric, and an intense desire to buy a fishing boat for $35. To raise money for the boat, the boys decide to convert Danny’s dad’s ping-ping table into a piece of modern art (which they name Harry). When it doesn’t sell, they end up (SPOILER ALERT) trading it for the boat.

The show’s title suggests that it would feature some sort of gimmick looking inside the protagonist’s mind, but over 18 minutes of the pilot pass before that gimmick takes effect. At that point, we get an extended Christmas Story-style dream sequence in which Danny imagines himself as a famous artist completing his last painting. He’s surrounded by adoring fans, his parents apologize for not wanting him to paint the ping-pong table, and Yankees star Whitey Ford comes by to ask for his autograph. Presumably, every episode would have featured a similar moment.

Fantasy sequence aside, the most notable thing about Inside Danny Baker is how little of Brooks’s style it shows. The Baker family is firmly WASPy, and there’s not a trace of the Jewish comedy to which Brooks has devoted his career. That’s understandable given the lack of clear ethnicity on TV in the early 60s, but it doesn’t explain why the show’s comedy is so generic in general. His signature wordplay and slapstick aren’t evident in the least. The only joke that made me think “MEL BROOKS!” comes in the fantasy sequence, when Eric gets Danny to stop painting by pleading “Even Kirk Douglas stopped for lunch!,” a reference to the actor’s role as Van Gogh in Lust for Life. Everything else is surprisingly low-key.

Indeed, it feels like an attempt to synthesize two hits shows from the era – Leave It to Beaver and The Dick Van Dyke Show. The pilot’s story could easily be a latter-day Beaver, and Mobley shares Jerry Mathers’s talent for making TV-kid dialogue sound natural. Heck, Eric even looks a bit like Beaver’s sidekick Whitey.

The most Beaver-esque material features Danny, Eric, and the boat’s owner Mr. Johannsen (played by Frank McHugh*). Early on, Johannsen teaches the boys how to haggle over the boat’s price, and it’s very much of a piece with the many scenes in which various adults teach Beaver various things about what it means to be a person in society. Just like on that show, it never feels like Mr. Johannsen is talking down to the kids. He’s just a wise old guy who genuinely wants to help them.

(*McHugh – frequent sidekick to James Cagney in the 1930s – deserves special mention, because he’s really a delight to watch in this pilot. He adds many wonderful little touches, and transforms nothing lines like “Hi fellas. I’m embarrassed” into some of the episode’s funniest moments. On the other hand, it’s probably not such a good thing that the best performance comes from the special guest star.)

But Danny’s father Ted (Robert Gerringer) is a whole lot grouchier than Ward Cleaver, and it’s in his sequences that the show starts to feel like The Dick Van Dyke Show (created, of course, by Brooks’s frequent collaborator Carl Reiner). Van Dyke’s Rob Petrie wasn’t overly grumpy, but he often seemed slightly irritated about the duties of fatherhood. His interactions with son Richie often had a harder edge than those on Beaver. There’s a sequence here where Ted, hoping to teach the value of money, struggles to find a fatherly cliché he’s never used before. Mobley keeps knocking them down, pointing out the last time he tried them. It’s very easy to imagine Rob and Richie having the same exchange, although Larry Matthews as Richie would undoubtedly have smirked a whole lot more. 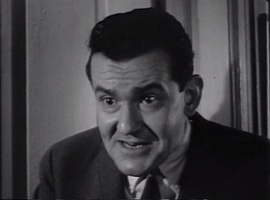 The Dick Van Dyke echoes continue in the scenes between Ted and his wife Gloria (Joan Hotchkis, displaying the same wry, bemused skill she later put to use as Oscar’s girlfriend Nancy on many episodes of The Odd Couple). The two briefly kiss in Ted’s dental office and share an amusing discussion of 1) if people driving by might see a dentist kissing his patient, and 2) whether that will increase business. It’s hardly the sexiest scene ever filmed, but it feels very much like a playful conversation a real married couple would have. The two have real chemistry, and even though they probably wouldn’t have become the next Dick Van Dyke and Mary Tyler Moore, it’s easy to see them eventually developing into a least a Dick York/Elizabeth Montgomery-level pairing.

One final similarly: the theme song (which is credited to Charles Strouse and Lee Adams, who had just worked with Brooks on the Broadway musical All American, although the absence of lyrics makes me wonder what Adams’s involvement was) sounds a heck of a lot like the Dick Van Dyke theme.

It’s easy to see why Inside Danny Baker didn’t get picked up. It’s not a bad show, but it doesn’t offer much that wasn’t being done better on other shows (except maybe the fantasy gimmick, but that’s probably the least interesting thing here.) It also didn’t offer its creator an outlet for the kind of comedy he loves. In pieces like this, it’s tempting to say something like “This gives us a glimpse of the Mel Brooks that might have been,” but it really doesn’t. It gives us a glimpse of a generic, journeyman Mel Brooks who would have been miserable, a Mel Brooks who would have spent the 80s writing scripts for Diff’rent Strokes or The Facts of Life. 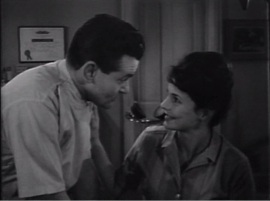 That’s unfathomable, of course, because Brooks threw so much of himself into everything else he ever did. Two years later, he co-created (with Buck Henry) Get Smart, a show that feels exactly like it was created by Mel Brooks and Buck Henry. This leaves Inside Danny Baker as an interesting aberration – and a fun glimpse at the failed-pilot landscape of 1963 – but it tells us little about Mel Brooks except that, for reasons known only to him, he was willing to try his hand at creating a family comedy.

It’s a nice place to visit, but it’s clear he didn’t want to live there.