Kerensa:  Noel, first off I want to get this out of the way.

I’ll try to refrain from saying that any more in our discussion of “Last of the Two Dollar Bills” despite the fact that it was running a loop over and over in my head.

So I really enjoyed this episode–it’s the first in awhile that’s engaged me and kept me interested. I thought the episode had much more of a noir feel that some of the earlier episodes had that I liked, Nazi top agent Wotan was creepy and I even got some David Lynch vibes in one scene. I mean, we will have to discuss the plausibility of the main plot, but overall I really liked the episode.

Noel: I really loved this episode, too! For the first time in a while, the episode didn’t feel padded, and the narrative moved at a really brisk and exciting pace.

I especially geeked out a bit as Wonder Woman threw her tiara like a boomerang. I wasn’t sure the show would do that, and I actually cheered when she did. Because I’m a nerd.

Tell me about Wotan and your Lynchian vibes. I didn’t pick up on any, but perhaps in hindsight, I’ll see it?

Kerensa: Agreed! I think that was one of the reasons why I liked it–the narrative was good and well-structured.

I was SO EXCITED when she used her tiara too! She hadn’t yet right?

The Lynchian vibes were really derived only from the scene when Wotan’s plastic-surgery enhanced (SO CREEPY) pair of Nazis made to look like the dude who was in charge of the money printing and his girlfriend. Just when they were all looking at each other coupled with being in the diner just screamed Lynch to me.

I thought Wotan was interesting–I mean he was by no means a complex villain (I won’t get into lady villains again, we all know my stance)–but he seemed more evil than a lot of them we get and almost like he could potentially beat Wonder Woman. And that weird eye thing the two of them kept sharing with the noise, so weird and creepy.

Noel: No, I don’t think she had used her tiara like that yet. And we had four twirls in this episode! Four! You must’ve been downing drinks. 😉

I follow, I follow. I didn’t pick up on that, but I totally see it, especially the bit at the diner. I was mostly tickled at the weird levels of narrative in-joking by having plastic surgery-enhanced doubles (and Wontan’s love of disguises) steal the plates for two dollar bills, a sort of odd nod to the saying “Phony as a two dollar bill.” It all felt very comic book-y, but not in the “and this and a little of that and then this!” way that last week’s episode was with the earthquakes and the plague and the atomic reactor. It was all much more subtle and, as you’ve pointed out, sinister, which speaks to the noir vibe you were picking up on, too.

No, Wotan wasn’t very complicated, but like Fausta, I think his key was that he didn’t overplan or overreach in his plotting. Everyone else has fairly convoluted gimmicks or they’re too arrogant, but Wotan executes his plan all without a hitch. If it weren’t for the Replacement Miller’s toothache and his steel filling (I love that a dentist ultimately unraveled the whole plot), he likely would’ve gotten away with his plan.

Speaking of his plan, you mentioned its plausibility…?

Kerensa: So MANY twirls! All the drinks!

It was MUCH more subtle. And comparing Wotan to Fausta is so spot on–all the villains we’ve got since Fausta have been so overplanned–which I think kinda lead to my thoughts about plans and their plausibility. Like whether or not this could actually work, I thought more about the plan and the logistics and whether or not it could actually happen than in any other episode mainly because it FELT like it could maybe happen as opposed to everything else that is just so blatantly unrealistic.

I loved the scene with the dentist too! Again, such a tiny subtle thing that brought it all down.

So, should we discuss Wonder Woman/Steve. Their relationship has been getting more and more romantic I think as we’ve progressed and in this one, I’d say they even went on a “date?”

Noel: They did have a little date! (And don’t forget her hair caressing of the sleeping Steve!) I was happy to see Diana sporting her formal, diplomatic representative attire for the tour as well. I thought it generally was okay in this regard, though I did sort of balk at her subtly trying to lead him to the conclusion about the potential plot as opposed to simply coming out with it. I really didn’t understand the motivation behind it. At the same time, he does downplay his own accomplishments in his report about the incident in favor of highlighting Wonder Woman’s contributions. Thoughts? 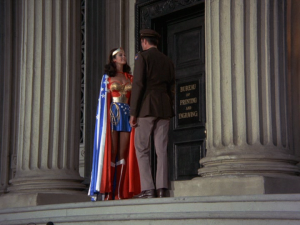 Kerensa: She even wore a special cape for it! She does do that, but I guess I feel like she does that to Steve in every episode? So I wasn’t surprised.

And I was SO glad that he highlighted Wonder Woman instead of himself. Finally. One thing that I wonder if will come back up is that I think Wotan recognized Wonder Woman’s feelings for Steve and I wonder if that will be used against her later in the season.

Also, didn’t it seem like Etta recognizes that Diana has a crush on Steve?

Noel: I did not pick up on Etta sensing an attraction to Steve…Elaborate?

Kerensa: At the very beginning of the episode, when thy are walking before getting their picture taken by Wotan, Etta says something just in passing that I read as an acknowledgement of Diana’s feelings for Steve. When they were talking about Steve fighting at the beach and Etta says something like “You would have loved that.” And just the way she said it made me think she had picked up on Diana’s occasional looks at Steve.

Noel: It would seem that Etta is pretty aware of things, though I’m surprised she picked up on that since it doesn’t have to do with food or money. How’d you feel about it being called out like that? I’m not opposed to, and it at least shows Etta and Diana having something resembling something to talk about outside of the office, even if it about how hunky Steve is.

Along these lines how’d you respond to the small ode to Wonder Woman that Steve says at the end of the episode? “She is a wonder. Strong and fearless, still compassionate. All the virtues of femininity with none of the vices.”

Kerensa: Agreed. But I really liked that Etta picked up on it, I’m hoping that it gives us a better sense of her beyond food/money/comic relief and into a more realized character. And I like that it was called out like that–I mean it’s been pretty obvious and I think to not have Etta notice would have been insulting to the character. And I agree completely that it’s nice to have Etta/Diana to have something outside of the office even if it is dumb Steve.

Yeah, I wrote down that quote while I was watching it. I thought it was interesting, however I wonder what the “vices” are? Nagging, shopping, women being women, ugh. Like I can’t even imagine what Steve would say and that grosses me out. What do you think about it?

Noel: Hah. That was exactly what I focused on, too! “Vices, Steve?” I thought to myself. “What vices could you be referring to? Maybe you ought to move in with Wonder Woman first before saying she’s free of feminine vices? Perhaps she just leaves magazines all over the place? Or her cooking is horrible? Or she won’t let you listen to the game on the radio and demands you do lawn work instead? Does she just cry uncontrollably during that time of the month and you go hide at the bar for a few days?” It seemed like such an odd little tack on of a thought that I suppose was meant to showcase how wonderfully wonderful Wonder Woman is, but it really just stood out as odd, even more so since it came on the heels of a) the talk about Wonder Woman in his report and b) the nice things he just said.

Kerensa:  Noel, you are the best. This is perfect and correct.

And it totally did feel so odd and weirdly tacked on, but Steve’s an idiot. So he probably didn’t even realize how TERRIBLE that sounded after everything else he said. I want some sort of feminism training thing to happen that Steve needs to go to.

Noel: I think Wonder Woman’s very presence in Steve’s life is supposed to be the feminism training, but I sort of wish Diana would whack him on the nose with a newspaper when he says things like that. This is a weird aside, but it’s one reason why I often prefer Diana without a secret identity to worry about. It frees her up to be herself, to be the Amazon she was raised to be, as opposed to to meek, mild-mannered Diana Prince. Unlike the dualities between Batman/Bruce Wayne and Clark Kent/Superman and Peter Parker/Spider-man, Diana is Wonder Woman and Wonder Woman is Diana. There’s no reason for a mask or a difference between the two. Sorry. Ranted.

Kerensa: Yeah, I agree with that entirely. Then why do you think she even has the secret identity? What’s the point of having it? And is this always true in the comics? 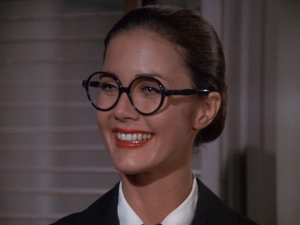 Noel: Narratively, it gives her access to the plot as opposed to being summoned into it — a la a Batphone — so she can be a bit more active. And it does afford her a way of learning about man’s world first hand: Diana Prince is treated differently than Wonder Woman is, and that speaks volumes about man’s world. I don’t know that this show always properly pushes against it — Diana’s charming smile at the end of each episode doesn’t always feel “Oh, silly man’s world.”

And her having a secret identity comes and goes in the comics. More often than not, she has one, but I prefer the run where she’s functioning as an ambassador for Paradise Island (roughly the late 80s to the mid 00s) and has no secret identity. Oddly, she finds the lack of a secret identity to be a burden after a major crisis (because DC Comics is all about crises) and resumes a Diana Prince alter ego. Currently, she doesn’t have one in her own book, but she’s experimenting with one in the Justice League book.

Kerensa: Yeah, it really does but it never seems to subvert anything about the “silly man’s world” like you said, especially with her smiles at the end.

She’s an ambassador for Paradise Island?! OMG. That sounds so cool. Does it get super political?

Noel: It can. Understandably, Paradise Island doesn’t have the best relations with the outside world. Sort of like Aquaman and Atlantis dealing with the surface world.

As  a friendly reminder, next week is the two-parter “Judgement from Outer Space.” We’ll discuss the pair of episodes in a single entry, like we did with “The Feminum Mystique.”