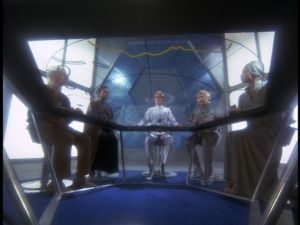 Noel: With “Judgment from Outer Space” we have our first explicitly science fiction-y episode as a highly advance Council of Planets decides whether or not to destroy the Earth as it begins to develop atomic power. So, you know, the show more or less decided to do their version of The Day the Earth Stood Still or any other number of “aliens are concerned that Earth is going to destroy the universe because they’re a bunch of savages” stories.

How’d this work for you?

Kerensa: It was fine for me. I didn’t like it as much as I liked last week’s episode and thought it dragged a bit but there were some interesting things that were brought up.

Noel: I thought it was a surprisingly generic sci-fi story that lacked hexagons. WHERE WERE THE HEXAGONS, KERENSA?!

Maybe it was an issue of genre? While I tend to approach most superheroes stories as fantasy, we veered into science fiction a bit this week and I’m not sure how conducive I found it to the mash-up of Wonder Woman’s world interacting with a well-meaning alien and, by proxy, an overbearing, ideologically-driven council (featuring our first ever black on the show…?) to a bit clumsily executed, despite some neat special effects — FUN WITH FILTERS! (I type that in all caps to convey sardonics, but I really enjoyed the low-budget effects this week.)

More than anything though, I was surprised (and disappointed) at just how little the show did to make stronger parallels with Diana and Andros. We’ve talked a bit about how Diana has perhaps become too embedded in the ideologies of the world of man when Drusilla visited, but here she’s practically an American mouthpiece to win Andros over, and I was sort of dismayed by it all. It wasn’t the first time she’s done this sort thing — again she did it in “The Feminum Mystique” — but I was hoping that Andros would better bring out the isolation that Diana must feel. Alas, t’was not to be.

Kerensa: I’m sorry that there weren’t enough hexagons for your liking Noel.

I do think that it’s an issue of genre. I like that Wonder Woman, despite the superhero/fantasy genre it is in, has played around with other genres mostly noir to varying degrees of success. But this didn’t really work for me at all. It also felt like just a random direction from last week’s episode–plastic surgery enhanced villains to aliens?

Oh I agree with you entirely on that. There was finally the opportunity for Diana to attempt to question democracy–even just a little bit, like when he mentions Americans of Japanese descent. And she just responds like you said as an American mouthpiece without any moment to ponder the monstrosities that our own government and who she works for is capable of. It was supremely frustrating to watch.

What did you think about Andros in general? I have some thoughts…

Noel: I’m glad you mentioned the Japanese American internment camps line. I actually said something along the lines of Andros’s comment to myself before he said it, and was pleased when he did. It presented a really nice moment for Diana to not only fully acknowledge the failings of a system she supports (which she does, sort of) but to try and work through those complications. It’s an episode that offers up some interesting moral implications but then sort of fails to do anything with them. Probably expecting too much given that Wonder Woman is intended as a family-friendly (but still sexy) adventure show, but it is a touch frustrating to watch all that potential get frittered away. It’s not hard to make a message accessible to kids so as not to end up with this wishy-washy ambivalence, and yet we did.

I really liked Tim O’Connor as Andros (amusingly, I know O’Connor from Star Trek: The Next Generation where he played, you guessed it, an alien diplomat), so performance-wise, I was pretty OK with him. But tell me about your thoughts. Your use of the ellipses makes me curious.

Kerensa: Exactly. And like we’ve talked about before Wonder Woman is an icon that’s so linked with feminism–it’s hard to not want more political engagement out of it.

I thought performance-wise Andros was great. But his one scene with the woman in the green dress, Lisa, when he was talking to her about how she’s clearly seen as a “charming object” and “letting her self be used” by the Nazis was part kinda calling out the patriarchal hierarchy but at the same time felt deeply patronizing. And then when he starts talking about how “love isn’t a commodity.” The whole scene was just…I can’t even find words for it.

Also, the whole romantic vibe between Andros and Diana. What did you think about that?

Noel:  There’s such a sadness and loneliness to Andros, and I couldn’t get over it. Even in the scene you’re referring to with Lisa Engel has that as he contemplates the bubbles in the champagne, it’s seeping out through everything O’Connor says or does, and I loved it. In regards to that scene, I was actually sort of okay with it up to a point. It’s more so when he starts recounting her dream to her that it felt decidedly…invasive, and I became uncomfortable with what he was doing. It was the inappropriate way to make that point. But, overall, your point is well taken. It’s a clumsily handled scene, a sort of the worst of best intentions being expressed. He’s patronizing in that way that lots of super-advanced beings tend to be in these sorts of narrative. At least the council woman who insists that humanity is a bunch of savages if up front about her distaste for everything. 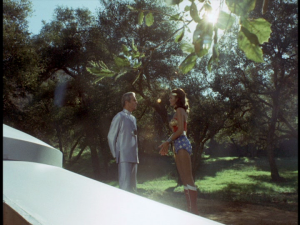 That romance vibe killed me. When Andros said that he’d be back in 1992, I was all, “Can we we flash forward to 1992 right now?! PLEASE?!” Their parting is so bittersweet, but I love that Diana stays firm in her decision to stay. Sure, we’re lamenting her radicalness being defanged steadily over time, and swallowed into nationalistic discourses, but at least she’s committed to that mission. Though Andros seems like a much better partner for her than Steve Trevor (who I think is generally pretty good in this pair of episodes, and Waggoner’s German accent was funny).

Kerensa:  Yeah, there really is and I can see what you mean. And the council woman’s distaste for everything certainly has a point.

The romance thing was ridiculous to me. I agree that I would have LOVED to see a 1992 flash forward, I do not want her and Andros together. I was glad that she stayed as well because of course. And I do agree that, yes he could be a better partner for her than Steve, in that he actually understands most of what she’s doing. But in a wholly superficial sense, can we get her a dude who is her intellectual equal who is also sexy? Seriously. So disappointed with Diana’s romantic options.

Speaking of romantic options, what did you think about Etta in this episode?!

Noel: Man. Poor Etta. I’m thrilled that the show is offering up some more to do beyond fret about Steve and Blankenship, but she was breaking my heart chasing after Paul Bjornsen (a very fun Scott Hylands, yes?). Knowing he was a Nazi didn’t help matters for me, but it I just get the sense that she’s just Miss Lonelyhearts cranked up to 11 and played for laughs. Beatrice Colen is knocking it out of the park in this regard, but I feel like her entire existence revolves around the office and finding herself a man.

Kerensa: I know I felt bad for her too. I did really admire her guts in asking Paul out though. That was awesome even though he’s a jerk. (Agreed on the super fun part though.)

Yeah, that really is about it. I’m hoping they give Etta something else to do. She does seem to be reaching out more and more to Diana in each episode as we progress.