Noel: Howdy there, cow poke!  I hope you’re prepared for Wonder Woman to take on a bunch of rascally cattle rustlers with the assistance of Roy Rogers himself!

What we actually have is both a vehicle for Rogers and his adoption advocacy efforts (this was also one of his last credited roles) as well as an excuse to put Lynda Carter in a low-cut blouse and have her ride a horse.

There were so many chase scenes in this episode. It’s been really interesting the way the show has been playing with genre–but I think it failed again.

Although there were some good things in this episode and some kinda really sad stuff. What did you think?

Noel: Like with last week’s outing, I sort of felt like the show stretched itself to have some relevancy to the war effort. It was the super rubber formula then and now it’s that the ranch supplies a considerable amount of beef. I guess? I was a flimsy effort, but at least there was an effort; they could’ve just made it so a favor with Blankenship was being called in, and that would’ve made zero sense.

You mention genre, and I wonder what you’re picking out. Certainly there’s the Western stuff, but it also felt like a Very Special Episode about adoption and little asides about kids’ health and coping with trauma. I will say that I felt like those elements fit in better than the Western stuff.

And I only had one big lingering question about the episode: Why doesn’t Babette get go and save Wonder Woman?!

Kerensa  Agreed. It was totally stretched out. At first, I was like what the hell does this have to do with ANYTHING? But then we got the flimsy explanation.

I was picking out the Western stuff. I agree entirely that it felt like a Very Special Episode which I didn’t really think about until just now.

Overall, the episode was kinda whatever for me. I thought some of the kid stuff was good, especially the reveal that the ranch guy’s son was the informant. And that whole scene with that kid and the identity stealing Sheriff was pretty messed up. I mean he preyed on this kid’s nervous feelings about his father adopting the war orphans and wouldn’t love him anymore. I think it’s one of the darkest things that we’ve encountered on this show all season. How’d it work for you?

Noel: It was into the VSE-vibe, but hot damn if it wasn’t appropriately creep-tastic with the tight close-ups and the “son” Lampkin looses near the end of the scene. And unlike the flimsy excuse to head to the ranch, Jeff informing to Lampkin about the cattle made sense given the context of the story. I mean, we even see J.P. spending more time with the orphans than with Jeff throughout the episode, so it stood out as much fuller than the rest of the episode did. at times.

Sidebar: I totally assumed that since Lampkin had stolen this identity that he was actually Dick Whitman. I’ll make the timeline work somehow. 😉

Tell me about the western stuff you picked out? 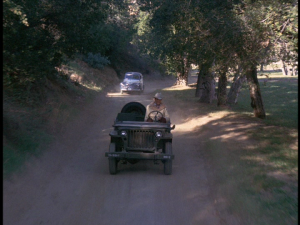 Kerensa: Yeah, totally. I was pretty creeped out by the end of it.

I mean I’m not super familiar or into the Western genre, but I think just some of the elements were the show really trying to be like “THIS IS OUR WESTERN EPISODE.” We had so many chases–many of the horse variety. The whole Texas setting including the cattle rustlers storyline. Diana’s “Western” get up–which was honestly pretty fabulous. Even the guest stars–Roy Rogers! It was just really trying so hard to make it work. Ultimately that didn’t work for me because like you said I think it did operate better on a VSE level and was just trying to throw in a Western setting because why not?

Anything stand out for you in this episode?

Noel: Beyond the creepy vibe, the only big thing that stood out for me was Roy Rogers. He is, unsurprisingly, really comfortable here (again, I feel like the episode was constructed to play to his strengths and interests as a humanitarian), but it also made me realize that for all the faults we’ve discussed for the past 11 episodes, the show’s casting of guest stars has never really faltered in any egregious way. And considering the very small scope of its main cast, this is a pretty damn important thing to get right, and they do it very consistently.

Kerensa: That’s totally true. They have been super on-point with the guest star casting. I wonder if that will be the same going into the second season. There were a couple of other small things that  stood out to me.

First, I liked the joking between Steve and Etta when she asks him to give her number out to tall Texan men. It was just a small, nice moment that made Steve feel somewhat endearing to me.

And when the cattle poacher bros capture Diana and take her belt off her, one of them says “Without her magic belt, she’s just another woman.” But is she really? That quote really stood out to me and I think is something to think about going into the finale of the first season (we’ve come so far together, Noel!) which is set in Hollywood! I’m already bracing myself.

Anything else for you?

Noel: The belt gives her powers outside of Paradise Island, so she loses her abilities without the belt in Man’s World. This is a TV show thing, I’m guessing so they have another way of weakening her; in the comics, her powers are given to her by the gods and enhanced by her training on Paradise Island, and she would only lose her powers if he was tied up by a guy. I am not kidding (though this weakness was eventually ignored and then removed altogether…at least I think it has been…).

Of course, Diana isn’t “just another woman” without her belt. She may be depowered, but the ideology and compassion she has exist regardless of the belt, and that’s the big core of Wonder Woman.

And I am bracing myself for Hollywood as well. On the upside, Drusilla is back!

Kerensa: That has some really weird S&M [Note: Link was Kerensa’s idea] sounding things to it…

And of course she isn’t but I just thought it was a great line to think about while heading into the end of this season.

Drusilla! I’m hoping she gets “discovered” and runs away to Hollywood to become an actress. Think the women of Paradise Island would be more disapproving of that than of Diana’s work?

Noel:The early Wonder Woman comics had a heavy hand with the S&M stuff. It was…yeah. Yeah.

And, yeah, I think Drusilla running off to work in Hollywood would not go over well.