Last month, word circulated that Artists Studio and the BBC were in the very early stages of developing a reboot of the 1980s drama Bergerac. Spokespeople for the project were very clear this project had not been commissioned, and it could be years before the series is filmed. Yet my eyes had already zeroed in on three words: “British,” “1980s,” and “detective.”

I have been searching for the British equivalent of Remington Steele for months. Something cheesy and tacky and indulgent. Remington Steele epitomizes the excesses of the 1980s with its over-the-top acting and corny dialogue, the show is deliciously entertaining. In American television, there isn’t anything else quite like it. So the search began for an ’80s detective show from the UK.

It’s actually incredibly difficult to find British detective shows from that decade that are still accessible to a Stateside audience. (Note: I’m making a difference between detective shows, which revolve around a singular or pair of detectives, and police shows, which revolve around a unit, squad or precinct. Likewise, for the purpose of this discussion, I’m drawing a distinction between detective shows and special unit/spy shows, so series like MI:5 (Spooks) and The Professionals don’t fall into this category.)

The grittier police dramas, such as The Sweeney and Z Cars aired during the ’60s and ’70s, not to mention they fall more into the genre of police drama. Popular, long-running detective shows came later in the 1990s: Midsomer Murders, Prime Suspect, A Touch of Frost, Cracker.

In the ’80s, you had your choice of The Adventures of Sherlock Holmes, a bevy of Agatha Christie-based shows (though these really act more like stand-alone, made-for-TV adaptations), Boon, Bulman, C.A.T.S. Eyes, The Chinese Detective, Dempsey & Makepeace, The Gentle Touch, Juliet Bravo, Inspector Morse, Shoestring, and Taggart. Of these, only Sherlock Holmes, Agatha Christie, Inspector Morse and the later years of Taggart are available from Netflix. A few can be purchased as DVD sets; most, however, can only be found scattered throughout YouTube, an episode here and there. This raises the obvious question of television curation and preservation, but that is a topic for another time.

Returning to Bergerac, here was a show that ran from 1981-1991. It featured a solitary detective, Jim Bergerac (John Nettles), on the British island of Jersey. Bergerac is a recovering alcoholic who intensely dislikes authority and frequently clashes with his ex-wife and former father-in-law. He’s insubordinate and thorny–a thoroughly complex, flawed character. Throughout the series, he goes through several girlfriends. His constant companion could be said to be his flashy 1947 burgundy Triumph Roadster.

Bergerac may have started as a fairly standard detective drama, but the show took risks throughout its run. It experimented with different kinds of storytelling and included episodes dealing with psychological and supernatural horror (“A Man of Sorrows” and “The Dig”). In the episode “Chrissie,” which this piece will focus on, Bergerac offers a wandering, disjointed plot that ultimately ends in senseless tragedy.

Remington Steele this is not.

“Chrissie” opens with three quick scenes that speak to the three concurrent storylines of the episode. We first see a disheveled young woman walking along the shore and staring at an old, seemingly-empty house. It then cuts to a busy city street, where three young punks snatch purses from cars as they’re waiting at traffic lights. This is immediately followed by a scene in a restaurant, in which Bergerac and his girlfriend are introduced to a pair of up-and-coming fashion designers—the Demoins—who are paranoid that their designs will be stolen before they debut in Paris. Bergerac and Susan are invited to the Demoins’s good luck party—an excessively lavish affair—and it is there that Bergerac meets Chrissie, the girl from the beginning of the episode. She is the nanny of the Demoins’s young and only daughter.

From there the episode fragments into various subplots, where all the pieces crisscross but never fully connect. The young punks steal more handbags, and Bergerac’s ex-father-in-law informs the press that the police aren’t doing their jobs properly. Chrissie goes on more walks to look forlornly at the old seaside house. The three thieves steal the Demoins’s suitcase of new designs (thereby pulling Bergerac deeper into the case), eat ice cream and drink soda on the pier while one of the boys voices his uneasiness over their thievery. His partners in crime scoff at his desire for a “normal” job: “All the fat cats here can afford to shed a few pounds.” So he wanders off and bumps into Chrissie, who just happens to be an old friend. He agrees to accompany her to this old, creepy house because she’s convinced the only living family member on her father’s side lives there. This exchange reveals that Chrissie is actually fourteen-years-old and an escaped foster child. Not wanting to go back, she flees with the rest of the punk gang—taking the Demoins girl with her—and Bergerac sets out to find her.

As the episode’s title suggests, this is Chrissie’s story. Not Bergerac’s. She is presented as waifish and sorrowful; the emotional weight, hardship, and life experience she carries far exceeds her fourteen years. It is this fragile, almost-pitiful quality that intrigues Bergerac. Even in the end, he wants to help Chrissie instead of arresting her.

This episode is not a straightforward detective procedural; it’s heavy and underscores several aspects of ’80s culture. For instance, “Chrissie” turns the Robin Hood trope upside-down. In a time of economic hardship and strikes throughout England, one might think that a story in which lower-class youth steal from the pampered, vacationing rich would be an attractive plot. Instead, the youths are portrayed as mean-spirited, selfish punks (the original counterparts to the youths in Shane Meadows films) who steal because they’re bored, and it’s easier to steal than to search for a real job. 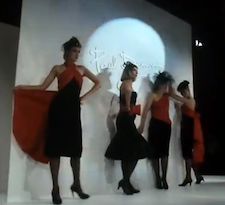 This episode also reveals the ugly underside to ’80s affluence, manifested most clearly in Simone Demoin. Simone is an absent, self-absorbed parent with a one-track mind throughout the episode: to help her husband succeed at the Paris fashion show, thereby launching their designs into the international spotlight. It is clear that Simone finds her daughter to be a nuisance, a troublesome thing for which she has no time. After her daughter disappears, Bergerac travels to the Paris show to tell Simone the news of her child’s abduction. She dismisses him. Even the disappearance of her daughter falls beneath the priority and importance of her professional success. The skin-tingling part of this entire affair is Simone’s refusal to admit any wrongdoing or misplaced priority. When she’s reunited with her daughter, she tells Bergerac that he “didn’t understand how important Paris was.”

Her preoccupation with fashion leaves a vacant space; her daughter, Michelle, has no one to look up to. Chrissie fills that role, and the two girls develop a strong bond. So strong that Michelle chooses to run after Chrissie when the older girl decides to leave—with disastrous results.

Perhaps the most disturbing aspect of the episode is its commentary on how relatively simple events can spiral into chaos, impacting innocent and unforeseen victims. This message is most apparent in the actions of Charlie Hungerford (Bergerac’s ex-father-in-law) who takes offense when his busybody inquiries to the police on the Demoins’s stolen designs are rebuffed. He drops a hint to the press that the police are keeping secrets about the handbag thefts and then goes on the radio to declare that the police are sitting on “a crime wave.” This escalates the sense of danger regarding the thefts when, in reality, they’re merely the cause of three bored youths.

In the end, a toxic mixture of self-interest, sensationalized crime, and desperation result in tragedy. The punks and the wealthy are both to blame for Chrissie’s fate. The youths ignite a fear and outrage amongst the island’s occupants; Charlie Hungerford, the affluent tourists, and the press fuel that histronic behavior. The youths and Charlie acted out of boredom—one from being poor, the other from being too rich with too much time on his hands. The two trajectories hurtled towards each other, and the tragedy is that both could have been prevented.
As the inspector says at the end:

So you see how three youngsters, three bored kids looking for kicks can make a ‘crime wave?’ You see how easy it is to be alarmist? To frighten the people of the island with the stories about failure of civilized values. Chrissie Baker, a totally innocent young girl, dies as a result of all this.

This episode of Bergerac is far removed from the tacky, terrifically entertaining Remington Steele. Indeed, its dark tone separates Bergerac from many detective shows of that time period. Despite the unsettling story and mood of “Chrissie,” it offers a fascinating snapshot of 1980s culture, specifically that of an isolated, luxurious tourist location whose population primarily places its own interests, comfort, pride, and success above others. “Chrissie” explores the shadow side of wealth and acts as a cautionary tale for those that desire drama to the point of creating it themselves.

Previously on Brit TV: Coronation Street: Working-class realism and escapism in the 1960s