Noel: This is it! The season finale of Wonder Woman! It’s got guest stars galore! Harris Yulin! Robert Hays! Barry Van Dyke! Christopher Norris! (Okay, I only know the last one from a couple of random episodes of Trapper John, M.D.) And it’s probably the most fun I’ve had watching the show, and I imagine that it is no small part thanks to the behind-the-scenes Hollywood vibe, which I’m such a sucker for.

Kerensa: I agree with you completely. Thought it was by far one of the best episodes we’ve watched all season (A WHOLE SEASON! We’ve been through so much!). It was fun and faster-paced. And made up (not entirely) for that last dreadful stretch of episodes.

I think the addition of Drusilla, for me, always helps an episode. She’s so great. I want her in all the episodes. Also, Robert Hays could totally get it.

What stood out for you the most in this episode?

Noel: Two words: Harris. Yulin. I admit to a high degree of bias as I always enjoy Yulin in practically anything and everything he’s in. But he’s so damn entertaining in this episode that it sort of hurts. As the movie mogul, he growls and chomps on that cigar in a parody of every movie mogul role ever. And then he switches to quietly menacing Nazi bent on assuming control of the entire American film industry. I. Loved. It.

And, yes, Robert Hays could totally get it. He was great here.  I mean, yeah, I basically only know him from Airplane!, but the episode played to his bumbling, awkward charm that he’d later use in that movie.

I didn’t even care that this was the umpteeth time that we had undercover Nazis in unlikely places. Can you imagine if this episode took place at any point after World War II? It’d be all Russians all the time. Wonder Woman + The Americans!

Kerensa: He was so so great! I loved how he was such a parody of movie moguls as well. That cigar!

Like how many hours later–and I’m still swooning over Robert Hays. He was just so adorable. And his plot was really sad actually.

How was Drusilla’s presence in this episode for you? I always am so glad to see her and I think she’s almost better at America than Diana is.

Noel:  Hays’s plot was actually really sad, but I liked that bit of pathos that they worked in as it has been a show that hasn’t really had any before, and I think this showed that they could have that sort of a sad dramatic element and it still feel conducive to the spirit of the show.

What I liked most about Drusilla was how consistent she was from the previous appearance. I was a little worried she’d be different somehow, but nope! There she is, drinking a gazillion ice cream floats and crushing on dudes. I do think that part of why she’s “better at America” is that she’s younger, and it’s a bit more understandable if she comes off as naive or sheltered, compared to Diana age and rank in the military.

What else did you enjoy? I really loved Diana and Drusilla’s dresses to the party, and their constant confusion over the word “slinky.”

Kerensa: I loved that whole thing about “slinky” as well. And when she tries to be “slinky” was so funny. However, Diana’s complete lack of knowledge about sex is simultaneously funny and super frustrating. I just want her to be more aware of things.

I think the Hollywood backdrop really enhanced the episode. I loved the beginning montage of all the Hollywood landmarks (and places I see all the time!) and just the little references thrown in like when at the “Hollywood party” Yulin makes a brief mention of Louis B. Mayer.

Anything else for you?

Noel: I think you hit on an important thing that isn’t really addressed on the show (and isn’t totally answered sometimes in the comics): How do they get more Amazons? Diana was in ancient Greece, so they obviously take forever to age, but what will happen once they all become as old as the queen? It’s a tough nut, though I admit that I’ve never been super concerned about it, so I try not to think about it too much. (The current  Wonder Woman comic does answer this question, but it’s dark: The Amazons seduce sailors that come too close to Paradise Island, sleep with them, kill them, and then keep the girls they give birth to while giving the boys to the weapons maker of the gods, Hephaestus. Lots of people were not happy about this. Of course, they turned all the Amazons to snakes or stones shortly after revealing this, making Diana the last Amazon, so it sort of doesn’t matter now. But still.) 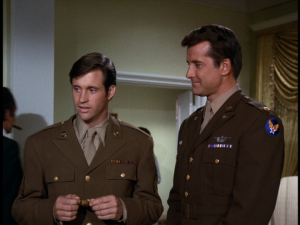 What’d you think about the episode’s use of masculinity? Obviously it was used toward a propaganda effort, which was in keeping with what Hollywood often did during this time, but I keep returning to Hays’s character and his insecurities. No one seems all that worried about the fact that he’s not wanting to talk about it, and he’s treated as something of a lost puppy by Steve.

Kerensa: Yeah, that makes total sense. And Diana seems SO uninterested in sex, even though her crush on Steve is obvious. And apparently I need to start reading the new Wonder Woman comic because that sounds AWESOME. That’s the kinda stuff I want from Wonder Woman.

I think it was interesting the way masculinity was explored. I’m not surprised that Steve treated him like a lost puppy, especially because I think we are supposed to see Steve as this alpha male ideal of masculinity — I think partially one of the reason Diana is so drawn to him. And I liked that Jim was kinda a Steve antidote — and I thought that was appealing, but I mean the way the show constructed it, I don’t think that’s the intended message. However, there was that interaction between Drusilla and Diana, when Drusilla talks about how he didn’t fight back or let her do it and then lied about it. Then after when he admits that he didn’t things are fine but it’s interesting that Drusilla seemed to see him as less than because he didn’t try to fight? I thought this was interesting because Diana is ALWAYS doing this for Steve, I mean he will fight back, but I don’t think we are supposed to see him as less of a man because he always being saved by Wonder Woman. Yet, that was the opposite with Jim. What do you think?

Noel: Maybe Drusilla wants a bit more of an equal than Diana does? She wants herself, but in male form, as well do at one point or another when we’re teenagers. Diana wants someone who complements here, even if Steve’s probably not an ideal partner in our particular eyes. But think that Diana does the same for Jim here by pretending to get shot by Bremer. It was all so that Jim can redeem himself in his own eyes, especially, but also in the eyes of those around. In much the same way that Diana attempts to lead Steve to an answer instead of just telling him, she’s attempting to re-empower Jim. 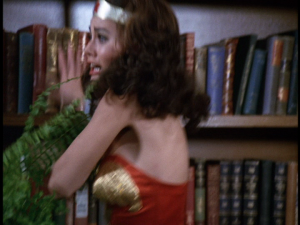 I’ve been grumpy about this in the past, but, I think I’ve come around on it a little bit as Steve always credits Wonder Woman with saving the day, or, in this case, Wonder Woman and Wonder Girl being the real heroes of the film. It doesn’t completely disrupt man’s world as much as I would like, but then I’m probably more radical than the show is willing to be in both the late 1970s (though I think that’s debatable), but definitely given the show’s time period setting. I mean, it is a fantasy after all. It could be more disruptive.

Kerensa: Totally agree. I do like how Steve always credits Wonder Woman. I wish it was more disruptive too. I feel like that’s what some of the best superhero things I’ve seen do–and I want that from this so badly.

Since this is the last episode of the first season, what did you think about everything overall?

Noel: Despite some dull episodes, I really enjoyed the show overall. Part of this — I think — is that it’s not a particularly dark show. Superhero narratives are often about tragedy and hardship and drama. And while some platforms provide humor (I’d direct you to the ever delightful Batman: Li’l Gotham as a fun, holiday-themed break from the doom and gloom of other superhero stories), it’s never consistently represented. Wonder Woman here, offers a light fantasy where, sure, the Nazis are threatening to take over the world and put on our heroes in trouble, the show is bright, poppy, and generally pretty damn optimistic.

As we were getting to near the end of discussion about the episode, the show doesn’t present Wonder Woman as particularly ideologically driven, which is, I acknowledge, more something we want from it than it’s interested in giving. To again return to the present, one of the reasons why Wonder Woman hasn’t been seen outside of comics and the Justice League series since this series, is that she’s perceived of as being difficult to write and market (female action hero box office/ratings fear bullshit). I agree with a Twitter pal of mine that when people say she’s hard to write, it’s because Wonder Woman was conceived of as being political, and it’s hard to chip away at that and still keep Wonder Woman true to her her overall roots (though whether we should always expect/demand that is a troubling thing, I admit).

This season demonstrates it’s at least possible to soften that political message and still be entertaining. It’s a soft feminism, for lack of a better phrase, that the show offers. It’s not one that I necessarily endorse or respond to, but it is at least there. I’m hoping that the time period shift opens the door to a more open discussion of Diana’s ideological goals and roots, but I admit that they’re only half-hearted.

How’d you feel about the season as a whole?

Kerensa: I really enjoyed it as well. However, I think the things that you really like about it–bright, poppy and optimistic are the things that kinda bother me about it. I wish it was darker and more political. And I completely agree with describing it as “soft feminism.”

While we did have some pretty bad episodes, the ones where the show really found its tone (like this one) worked really well. I’m wondering as well how the time period will change things and also I would assume Diana’s comfort levels with being in the U.S. will change and I’m hoping make her more assertive and maybe will open up for more political dialogue. Also, hoping that with the next season we can change up the episodes all ending with Diana’s smiling.

A reminder that Kerensa and I will be taking the next two weeks off. I was going to provide some content for those two weeks, but that was all before I found a new place to live and am moving very soon. As a result, I’m going to take that time off because I need to pack things, figure out what’s getting donated, arrange things basic to survival, etc. Kerensa and I will return on May 28 with a look at the 1974 pilot with Cathy Lee Crosby.  -Noel