Because of the length, the target family demographic, and the writers’ approach to the on-going story, So Weird rarely has any excuse to have a “busy” episode. But the start of season three brought a one-two punch of cosmic shifts to the show’s production that made it necessary for the premiere of the new season to be much more crowded than is normal for the show.

The smaller cosmic shift involves replacing Cara DeLizia, who, prior to production on season three, decided to follow in Erik von Detten’s footsteps and leave So Weird for Hollywood’s greener pastures. It was easier to replace von Detten, because the Bell family were never central to the show, nor were they very developed as a family at the time, which left wiggle room to bring in Carey and send Clu off to college. But Fi’s family is key to the show’s emotional core, and Fi is the protagonist of that journey. Replacing her means changing directions completely while also essentially hitting a reset button. So it’s about two steps shy of impossible, in terms of being able to accomplish all this without short-changing the show’s strengths at some point. Fortunately, “Lightning Rod” is exactly what it needs to be: a delicate balancing act of introductions and farewells, wrapped around a paranormal investigation that successfully brings Fiona’s journey full-circle and allows her to settle down and live a normal life for a while. The episode has to accomplish three things: provide a meaningful farewell for Fiona, provide a half-decent introduction for Annie, and not fall off the rails at any point. 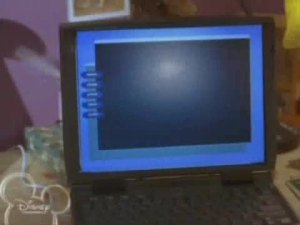 The show relishes the task of sending Fiona away. First, Erik von Detten makes a special return, joining his family, the Thelan family (including the new girl, Annie, played by actress/singer/songwriter Alexz Johnson in her first major role on television), and the Phillips family for a giant dinner at the Phillips home in Hope Springs. He becomes the first victim of the spell Fi casts from Aunt Melinda’s spellbook, and von Detten easily slides back into the role of the chilled-out surfer boy simultaneously daunted and fascinated by the weirdness that surrounds him. That spell, which turns most of her family into animals and Clu into a maple tree, was cast by Fi in order to spite the second returning character and the best possible choice for Fi’s final episode: Bricriu, the will o’ the wisp who left Fi and Molly to burn in an old warehouse (as Fi so angrily reminds him when they finally start chatting). Bricriu returns insisting, once again, that Fi’s family is in danger, and asks her to read a spell from the book. It’s only after Fi and Annie have reversed Fi’s spite spell that he tells her why: the spirits over in the spirit world are mightily ticked off that Fi opened a door to their world, and are eagerly preparing to attack Fi’s family in retaliation. The only way to stop them is for Fi (being the one who opened the door) to severe her ties to the spirit world—and by extension, the supernatural—forever. It’s not an easy choice, but Bricriu boils it down to a simple question: “What would your father do?” For Fi, it’s not a question, and as the engraving on her great-grandmother’s ring fades away, the viewers at last understand what’s happening: Fi is leaving for good.

But Fi’s true farewell scene is not the mythos-heavy Paranormal of the Week or her conversations with Bricriu; it’s the last conversation she has with Molly, in which she lays out her plans to stay with Aunt Melinda and ride out the rest of high school in one place. “A long time ago, when I thought everyone else was laughing at me, I asked if you believed me. You didn’t say yes, but you didn’t say no, either. So I’m asking you again: when I say that everything will be okay, do you believe me?” Fi calls back to “Family Reunion” and multiple similar conversations the two women have had over the show’s run, and this time Molly answers in the affirmative. It’s the capper to the show’s best relationship, the one that was powered for so long by Rick’s death and is now affirmed by trust and faith.

“Lightning Rod” accomplishes all this alongside the task of introducing Annie to the viewers, but it’s fortunate that So Weird will have a whole season with her, because it leaves more room for Fi’s goodbye. Nonetheless, the show strikes a good dynamic between Fi and Annie, and the episode gives a good sense of her character, bolstered by Alexz Johnson’s joyful performance. “I like this girl!” Molly exclaims when she’s pelted with compliments by the peppy blonde at the front door. Fi later echoes her mother when Annie gives the idea to run upstairs after dinner so that the boys will be left with the dishes. But even in this first appearance, the show starts to plant the seeds of Annie’s character arc. At dinner, Annie mentions that her favorite place to visit is Peru, which prompts a quick conversation diversion from her mother; later, Lisa Thelan tells Molly that Annie was very young when the family was in Peru, and she “gave them a scare.”

A bigger red flag is thrown when Bricriu finally gets into the house. He makes a dive bomb for Annie, but at the last second is diverted to Fi’s laptop, where he resides until the end of the episode when Fi saves him to a floppy disk (as part of the spell that cuts her off from the supernatural world also forces her to forget his one true name). When Fi asks him why he didn’t just take over Annie’s body, he simply states, “She’s protected. Off-limits! People like her should come with a warning!” And then there’s the ending, when Fi gives Annie her great-grandmother’s ring. When Annie puts it on, the engraving, which disappeared after Fi cast her severing spell, magically reappears. This ties back to Fi’s final opening sequence, where she talks about the concept of “lightning rods” of supernatural activity. “I’ve seen too much to believe that lightning never strikes twice,” she says, and the lightning sparks an image of Annie in the glass of Fi’s bedroom window, just for a second. It’s an image the episode mirrors at the end, with Annie looking out of Fi’s bedroom window, reflecting herself. The change is complete.

With all this happening, it’s small wonder the procedural element of the show is played for laughs. The spell Fi casts to spite Bricriu is a basic “change man to nature” spell, and is treated with just the right amount of seriousness, which is “none at all.” Jack gets turned into a dog, which is only slightly less disturbing than when it happened to Fi in “Shelter” because at least we know that this change won’t kill him; Ned and Irene become one with nature quite literally by becoming flowers; Molly and Lisa get turned into ducks (or is it gossiping geese?); Clu is the maple tree who shakes out the magic book into a pile of leaves; and Carey, scavenging for food in the fridge, becomes a rabbit. So, not falling off the rails? Big ol’ check. A healthy dose of humor never hurt this show one bit, and even Fi gets to roll through a series of final puns and quips as she saves Bricriu to the floppy disk at the end.

There’s a larger cosmic shift to So Weird coming, one that fundamentally alters the show’s approach to storytelling for good and represents the third season’s eternal struggle to retain the same qualities that made it compelling family programming for the first two seasons. But all that is to come. With “Lightning Rod,” the show pauses for a moment to say goodbye to Fiona Phillips and Cara DeLizia, and to greet Alexz Johnson and Annie Thelan with a warm smile and a bit of witchcraft. It’s sweet and charming, and yet fundamentally, it is still So Weird as it was born to be.

Cameron White is a freelance writer currently residing in Arkansas. He writes about television over on his blog, Wayward Television, and tweets all-caps-lock reviews of Game of Thrones. His obsession with television was founded in 1996 by The Disney Channel and fostered by his discovery of Firefly in the summer of 2007. He likes pink umbrellas with his appletinis, thank you very much.