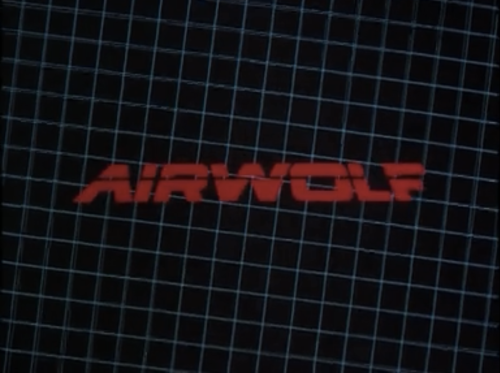 Les: Well, it’s time for the roundtable to jump ahead a couple of decades to the 1980s. The 1970s didn’t boast as much memorable secret agent-themed programming as the 1960s did—the events of Watergate likely left a bad taste in many peoples’ mouths when it came to spying—and it took the imperialistic and jingoistic sense of the Reagan years to bring the profession back to life. And with it being the 1980s, there’s no better way to enter the decade than with the glorious synthesized beat of the greatest theme song ever for any television show (and one I wish I’d nominated in our controversial Hall of Fame category): Airwolf!

This is of course not our first visit to the helicopter-centric exploits of Stringfellow Hawke (Jan-Michael Vincent) and Dominic Santini (Ernest Borgnine) here at This Was Television. Earlier this year, our colleagues Cory Barker and Myc Wiatrowski visited the show for their excellent series of discussions on masculinity in 1980s television, looking at the two-part pilot “Shadow of the Hawke” and later season one installments “And They Are Us” and “To Snare A Wolf.” If you haven’t read those installments—which you should if you haven’t already—you know that Airwolf is a show that works in spite of a ludicrous premise, one that is simultaneously great and awful in its incorporation of real-world seriousness, and one that has some considerable problems in its treatment of women. I’ve watched all four of those episodes, and agree with Cory and Myc’s take on the show’s strengths and weaknesses, even though I remain more of a sucker for the scenes when the helicopter soars up and the synthesizer kicks in.

“Fallen Angel” is an episode that has plenty of that as Airwolf launches not one but two attacks on an East German castle, but it’s also an episode chock-full of espionage goodness. Rather than focusing on the series’ recurring plot of Hawke’s missing brother, “Fallen Angel” is centered around the Firm, the shadowy government agency who designed Airwolf and at whose behest Hawke and Santini carry out their missions. Hawke’s contact Archangel (Alex Cord, channeling Tom Wolfe by way of Sammy Davis Jr.) has been captured on a mission to extract a double agent, and is 36 hours from being disavowed for good. Despite the Firm refusing to back the operation, and the two being badly injured in a stunt plane crash* gone wrong, it’s up to them to fly behind the Iron Curtain and rescue Archangel from captivity.

*A stunt for a film whose director is, interestingly, played by long-time Andy Kaufman collaborator Bob Zmuda.

But it’s a mission that turns out to be even more complicated, as his kidnapping is tied up in a convoluted scheme of triple agents and a serum that almost turns Archangel into one himself. It’s a nicely layered plot that involves multiple twists and diversions, which kept the episode from being dull—I was pegging Maria to die tragically from the get-go so her betrayal of Hawke and Archangel made for a nice twist. I enjoyed the dynamic that was set up in the history between Archangel, Maria and Krüger, which resolves in ugly fashion thanks to Hawke being quick with a gun in his sling.

The episode also nicely illustrated the solitary nature of what Airwolf does. In most of the installments we’ve seen to date, our heroes are able to call upon the resources of their various agencies, or are skilled enough not to need them as we saw with The Avengers. Here though the support system is one that’s uneasy at best—Hawke’s essentially holding Airwolf hostage until the Firm gives him the intel he wants, and he goes on these missions out of pragmatism mixed with reluctant altruism. And of course, Archangel’s abandonment by the Firm is an instance of that old threat of being disavowed* should a mission go south–a promise uttered at the start of every Mission: Impossible episode—and one that further cuts off any question of assistance. Santini says it best to Caitlin O’Shannessey (Jean Bruce Scott) as she expresses confusion at why they’d avoid the friendly NATO fighter jets: “In Airwolf, we ain’t got any friends.”

*This gave us a delightful rant from Santini in the conference room, and the fury of Archangel as Zeus coldly dresses him down. Yes he’s being brainwashed, but his anger in that scene still feels very genuine.

Speaking of Caitlin, this is of course the main difference from season one episodes, as she was introduced at the behest of CBS executives who wanted to broaden the show’s appeal. Caitlin suffers from the show’s previously established tendency to look down on its female characters, and the scenes where Hawke tries to teach her to pilot Airwolf in Santini’s absence are painful in the extent to which they portray her as befuddled at the controls. (Also painful is her reaction after they evade the East German patrols: “Hey guys, this is fun, I think we make a pretty good team!” “NO.” “Just a thought.”) But at the same time they’re not playing her for pure chauvinistic humor, as after those early bumps she successfully aids Santini in the two raids on the castle, and there is the scene where she judo flips a nurse without breaking a sweat. Given this is the episode she’s introduced to the Airwolf secret—after a few episodes I assume being kept in the dark by a series of comedic misunderstandings–I’m assuming some of those issues are remedied as she becomes more of a active part of the team.

At least I certainly hope that’s the case. 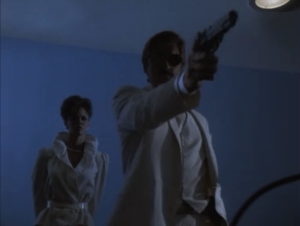 J.: I’ve been avoiding this. I watched Airwolf religiously when I was a small child—I have a vivid memory of playing “Airwolf” with my friends around the patios and balconies of our apartment complex, wearing my oversized laser tag helmet and pretending to fire missiles at the opposition. (My friends always insisted on playing on the side of Redwolf, Airwolf’s laser-equipped evil twin. Rogues!) But I remembered astonishingly little of the series itself, and was certain that revisiting it would only lead to sad disappointment. Thankfully, that wasn’t quite the case—Airwolf is still a load of fun, even if it shows its age in a lot of places.

I was mostly pleased to discover that was actual espionage happening, since all I remembered about the series was the helicopter itself. The episode coasted a little bit on (what I assume to have been?) recurring villains, but I thought the story was properly twisty. I would have liked to see the post-brainwashing part of the story drawn out a little, perhaps—to crank up the suspense around Archangel’s impending assassinations—but it was a pretty solid piece of plotting.

I also liked the brief flashes of style we saw from Airwolf, primarily the way the FIRM’s conference room was cloaked in shadows, rendering the entire cast into silohouettes. I also got the impression this was a series stretching its budget to the maximum—with all the money spent on hero shots of Airwolf and staging prop plane crashes and massive fire fights, I don’t begrudge them the somewhat bare-bones set design. (Though I swear I’ve seen that castle before—an episode of Star Trek, maybe?)

Of course, the real cringeworthy stuff was with Caitlin, as you pointed out, Les. And Maria didn’t fare all that much better, really—she was allowed to be competent in baiting the Airwolf crew, but she came across as little more than bait and a tool for the evil Germans to use. And she was so obviously doomed from the moment she appeared on screen, fated for a death that, again, was really about Archangel’s reaction, not Maria. After The Avengers last week, it was disappointing to reenter a boy’s only club like this.

Cameron: I don’t know, guys. I had a hard time watching this episode, and I’m usually up for just about anything that’s ever aired on a television screen. (You can quote me on this when The Fast and the Furious becomes a TV show.) And I generally have no qualms with shows that are unabashedly militaristic or masculine, such as Airwolf appears to be. But beyond the nifty-looking helicopter and the gunfights, there wasn’t a whole lot of interesting stuff happening. There’s good banter in places, but I never felt myself getting attached to any of the characters. The action scenes are all pretty cool, but the plot is only barely there to justify the existence of those scenes to begin with. And yes, Airwolf has some problematic depictions of women, which is dire because, thanks in no small part to Hermione Granger and So Weird‘s Fiona Phillips, I tend to attach to female characters faster than male characters, and this show didn’t really write to any of the characters, so that was a wash.

It’s possible if I gave this show a more honest shot by watching some more episodes and accruing some knowledge of how it approaches storytelling, I might appreciate the episode and the show a little more. But from the first montage of scenes-to-come (why was that ever fashionable again?), I just was not vibing on this show at all. The action-y stuff was dumb fun, but the rest just put me to sleep.

It was supposed to be a spy show, you say? Um, I think the airplane-to-person ratio per scene is a bit unbalanced for that particular genre. Airplanes don’t have feelings!

As a reminder, we’ll be sampling a different series every week for the next few weeks: