Rita Capkovic appeared in three episodes of The Rockford Files and in one television movie. All total, she was in roughly five hours of a series that spanned six seasons, 122 episodes and eight movies. With stats like those, the odds of her leaving an impression on viewers or the series as a whole were not in her favor. However, Rita Capkovic wasn’t just your typical recurring character. She was portrayed by living legend and bona fide EGOT (an Emmy, Grammy, Oscar and Tony Award winner) Rita Moreno, a woman who is impossible to forget.

Moreno is one of only eleven EGOT winners in the entire industry and she is the only Hispanic performer to have achieved the honor so far. She won her Oscar (and a Golden Globe) for her role as Anita in West Side Story, and after she took home her golden statue, she didn’t take another film role for seven years on principle. As she recently told Tavis Smiley, it wasn’t until Hollywood began to offer her something other than the stereotypical “Conchitas and Lolitas” roles that Moreno resumed her big screen career. Even with a seven year break, Moreno’s career is expansive. She has 141 credits to her name in roles ranging from the voice of the beloved animated character Carman Sandiego to Oz’s steely Sister Peter Marie to Louise in Mike Nichols’ controversial 1971 film Carnal Knowledge—and that’s not counting her various stage roles. Additionally, she’s an activist who was present at the March on Washington, and who has received both the Presidential Medal of Freedom (2004) and the National Medal of Arts (2009). You see, when I called her a living legend, I wasn’t exaggerating.

With a career as long and varied as Moreno’s, Rita Capkovic, a stereotypical hooker with a heart of gold who rode shotgun with Jim Rockford (James Garner) a few times should barely be a blip. But Moreno was nominated for two Emmys—and won one—for the role. Remember she only appeared in three episodes total.

So what exactly is it about Rita that makes her so special? On the surface, she embodies every prostitute cliché television loves. She’s goodhearted and deeply generous, always giving to others with no thought to her own well-being. She’s imbued with an innocence that juxtaposes with her sexuality in a way that Hollywood can’t resist, and that innocence is depicted not only through her attitude, but through the visual cue of her stuffed animal littered apartment. She is simultaneously infantilized and sexualized. That’s how Rita presents, but it’s not necessarily who Rita is. 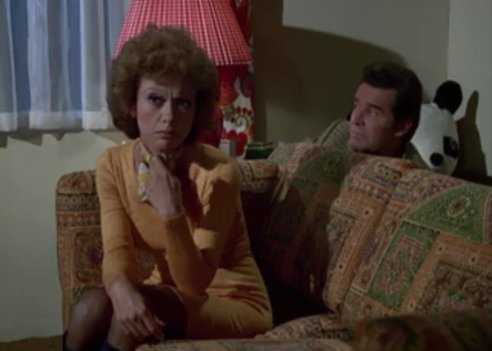 The character first appears in the season four episode “The Paper Palace,” a fast-paced outing that finds Rita looking for friendship from Sergeant Dennis Becker (Joe Santos) and a little help with two French men who keep showing up at her place. The moment we meet her, Rita is getting booked after being picked up for public solicitation, and before she ever speaks a word, the episode’s writer, Juanita Bartlett, tells us everything we need to know about the character by revealing that Rita lists her profession as “poet.”

What’s remarkable about “The Paper Palace” and Moreno’s second appearance the following year in season five’s “Rosendahl and Gilda Stern Are Dead” is how utterly unapologetic Rita is about her line of work. “The Paper Palace” aired in 1978; the sexual revolution had already swept through America by that time and attitudes on sex and morality were beginning to shift. However, even in the time of free love, the public’s opinion on sex workers was generally negative. The Rockford Files reflects that negativity by having several people, notably people in positions of power, vocalize the idea that Rita is in some way tainted or worthless because she exchanges sex for money.

When she is brought into the station, Rita is genuinely afraid for her safety because of the two men who have been following her, but her fears are dismissed. The police, particularly Lieutenant Chapman (James Luisi), believe that the two men are just Johns that Rita has angered. In fact, the Lieutenant goes so far as to warn Dennis not to use any police funds or resources to assist Rita even though she has been a valuable informant for them in the past. Then later, at a dinner party at Dennis’ house, one of the guests reacts with disgust when her husband (who is later revealed to be one of Rita’s regulars) alludes to the fact that Rita is a prostitute.

Throughout all of the judgment and insults, Rita never wavers or apologizes for what she does. In fact, she tells Rockford shortly after meeting him: 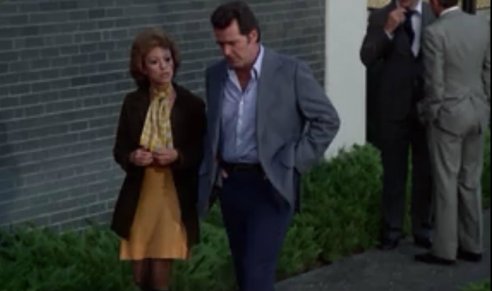 The series wisely recognizes how alike Rita and Rockford are. Rockford’s private eye gig is only slightly more respectable in the public eye than Rita’s profession. He also has a prison stint under his belt. For these reasons, the duo recognize that they are kindred spirits fairly quickly. It’s the bond that develops between them as Rockford helps Rita unravel the mystery of the two men that are trying to kill her that drives her subsequent visits to the series.

By the end of “The Paper Palace,” Rita comes into a large sum of money, opening up an avenue for her to leave her days as a prostitute behind. Every character, from Rockford straight through to Dennis and his wife, insists that what Rita needs to do is to buy a house and settle down. Each of them projects onto Rita their own idea of what a quality life entails, and ignores when Rita protests that she enjoys apartment living—a subtle way of implying that she enjoys her lifestyle, an idea that is hinted at rather than implicitly stated.

Even the implication is daring, as is the fearlessness in the way the series gives a small look into what Rita’s day-to-day life is like when Rockford spends a night at her apartment during a stakeout. He receives multiple phone calls from Johns looking for Rita, as well as visitors to the door. The idea that Rita has actually chosen to be a prostitute, rather than being forced into the role is a decidedly third-wave feminist attitude to display during the second wave era.

When Rita returns in “Rosendahl and Gilda Stern Are Dead” she has blown through all of the money she inherited in “The Paper Palace,” and returned to working the streets. Of course, since the series has established that Rita is selfless to a fault, the majority of the money was spent on others with the lion’s share ironically going to an unseen man. Her only major purchases for herself are a nicer apartment, clothes and a microwave.

Rita reenters Rockford’s life when she is accused of murdering a surgeon who was last seen alive with her as they left a hotel. While Rockford is mostly nonjudgmental about Rita’s life, he is both disappointed and confused by how quickly Rita ran out of money. He questions her multiple times, always raising the point that the money was meant to provide her with “security,” which is code for a way out of prostitution. “Jim, what’s a person like me going to do with security?” she counters before going on to insist she doesn’t want a “little house.” Even as she’s facing a murder charge, Rita refuses to be cowed.

Moreno imbues Rita with an overwhelming amount of bravado in her first two appearances. Rita is a relatively small role compared to some of the others the actress played in her career, but Moreno’s performance projects a fearless sense of pride that gives Rita her bite. Even if Moreno hadn’t been a longtime friend of Garner, it’s easy to see why an actor of her caliber would want to take on the role given how richly Rita is drawn. Unfortunately, Rita wasn’t allowed to maintain her pride or her richness in her final appearance in season six’s “No Fault Affair.”

The episode is a paint by numbers ode to the dangers of prostitution, a cautionary tale and an excuse to explore a potential romantic pairing between Rockford and Rita in the most cringeworthy way possible. Rita shows up this time to show off a new beautician’s license and announce that she’s leaving the streets for good. In and of itself, having Rita choose a mainstream profession isn’t problematic, the trouble only arises when Rita, who had up until this point appeared to be a free agent—remember her Johns didn’t go through a middle man in “The Paper Palace”—is given a violent pimp who brutally beats her when she tells a young woman who is also on his pay roll to leave the streets. 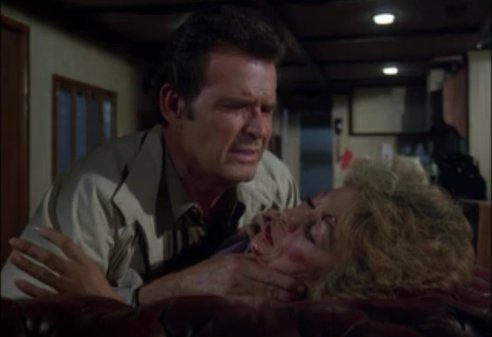 The entire scenario is so far outside of what we’ve previously come to know about Rita that it would be laughable if it wasn’t so disturbing. Things only get worse from there as it is quickly established that Rita’s brutal beating was just a plot machination to get her into Rockford’s trailer so that the series could explore the idea of the two being romantically involved. Everyone in Rockford’s life is appalled by the idea, an attitude that runs counter to the fact that the series had previously established that Rita and Rockford were cut from the same mold. Complicating matters further, Rita begins to obsessively hover and micromanage Rockford’s life until she becomes a clingy caricature of the free spirited person she was before.

There is a small reversal by the end of the episode when Rita commits the ultimate selfless act and takes a bullet for Rockford, but it’s too little to save a terrible episode. Even the final scene in which Rockford and Rita exchange shy “I love yous” before transitioning back into their usual language of banter is tainted by the mess that came before. It’s worth noting that although this was Moreno’s flashiest Rockford episode it was the only one that she didn’t receive an Emmy nomination for.

Rita returned to the Rockford franchise one last time in the final TV movie, 1999’s If It Bleeds…It Leads to play an older, married version of Rita, who finally bought into the idea of security that Rockford (the man who lived in a trailer on a beach) kept trying to sell her. It’s best to remember her as she was when she entered the series though: funny, brave and unapologetic– a poet unappreciated in her time.

Previously on Women in the Box: Friends‘ Rachel, Monica, and Phoebe

2 Responses to “Women in the Box: Rita Capkovic, The Rockford Files”