And Mel’s back! “Hustling the Hustler” isn’t what I’d call a hilarious episode (though it’s plenty funny and consistently engaging throughout), but after a few weeks without the producer trading expressions of disdain with Buddy, it’s nice for Dick Van Dyke to open with an extremely clever joke featuring Messrs. Cooley and Sorrell, in which the latter is required to donate money for every insult. Among the brilliant moments is Buddy’s discovery that calling Mel a “big blubber-nosed baboon” is too expensive, which forces him to amend that insult slightly (changing the “big” to a “small”) so he’s only charged a quarter. Mel gets the last laugh, though, depositing a dollar’s worth of quarters and informing Buddy “that’s for what I was thinking!”. 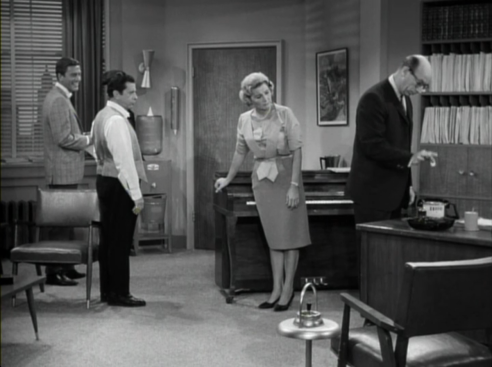 It’s a terrific start to a very solid episode, even if it has nothing to do with the rest of the installment, which concerns Buddy’s brother Blackie’s attempts to prove to Buddy that he’s left his pool hustling days behind him. “Hustling the Hustler’s” plot is quite predictable (it’s obvious where it’s going from the moment Blackie gets himself invited to Rob’s house), but it works thanks to an excellent performance from Phil Leeds. An actor whose work spanned four decades and dozens upon dozens of shows and films, Leeds turns in an appropriately charming portrayal that makes it just plain fun to watch an overconfident Rob Petrie get hustled.

“Hustling the Hustler” could probably use a few more big laughs (there aren’t many outside of that opening scene), but it still succeeds because it’s simply a very well-told story, with plenty of sharply observed moments. While it’s difficult to get too invested in a strained fraternal relationship that we didn’t know anything about until this episode (one of the perils of limited serialization), Buddy’s initial reaction to Blackie showing up out of nowhere is very well-played by both Leeds and Morey Amsterdam, who convey the history between the brothers terrifically. It’s nothing too powerful, but the scene has enough believable emotion behind it to work rather well.

This eventually leads to the aforementioned hustling scene, which is just incredibly enjoyable. We learn that Rob fancies himself something of a skilled pool player himself, and at one point he even remarks to Blackie that he could have been a hustler: a line of dialogue that very effectively plays on knowledge that we have but Rob doesn’t to get a laugh. And the moment when he realizes what he’s gotten himself into offers yet another chance for one of the masters of facial comedy to provide us with a pitch-perfect comic expression, which of course he does.

Blackie of course doesn’t take Rob’s money, instead tearing up the check in front of Laura, Buddy, and Rob (Buddy having arrived too late to prevent the hustle) as a means of proving his sincerity to his brother. Again, it’s clear as day throughout the hustle that Blackie wasn’t intending to go through with it (Dick Van Dyke is not the kind of show that would end on a note as bleak as Buddy’s brother lying to him and Rob losing 300 dollars), but it’s a nice moment nonetheless. This season’s biggest highlights are all still coming, but “Hustling the Hustler” is, like “The Two Faces of Rob,” a very strong example of the kind of strong mid-range episode the series was producing regularly at this point.

Next Week: “My Husband is Not a Drunk”

One Response to “Review: The Dick Van Dyke Show, “Hustling the Hustler””