The end of the 1990s bore witness to something truly brilliant and one-of-a-kind: the comedy Spaced. It was weird. It was clever. It was bizarre. It was consciously satiric and culturally subversive.

Created by Simon Pegg, Jessica Hynes (née Stevenson) and Edgar Wright, Spaced begins with two twentysomethings — Tim (Simon Pegg) and Daisy (Jessica Stevenson) — who pose as a couple in order to rent a decent flat in London and then follows their relationships with the building’s other tenants and each other’s friends.

Tim describes himself as a comic book artist, though he spends an extraordinary amount of time playing video games and hanging out with best friend Mike (Nick Frost). Daisy professes to be a writer, but uses any and every excuse to procrastinate from writing. Their landlady Marsha (Julia Deakin) is a lush who inserts herself into everyone’s business, lusts after (and sometimes uses) Brian (Mark Heap), the eccentric, moody artist who lives downstairs. Not able to join the military due to his poor eyesight, Mike joins any group that lets its members wear uniform; Twist (Kathy Carmichael), Daisy’s best friend, is a scattered, superficial individual who “works in fashion,” which actually means that she works at a dry cleaner.

Spaced is a perfect product of its time. It comments upon, makes fun of and reflects the end of the 90s. The series explores notions of slackerism and lack of direction. The characters do everything within their power to avoid adulthood, an attribute sometimes given to Gen-X’ers in that decade.

Spaced also looks at random friendships and how those can become meaningful. Had it not been for Daisy and Tim deciding to become flatmates, this delightful bunch of peculiar characters would have never crossed paths. From the pilot onward, the show builds on the characters’ relationships with one another, and they create a “curated family” of sorts, to use Linda Holmes’s phrase. The friends-as-family theme was a significant part of the sitcom landscape of television in the 90s — with the likes of Friends, Will and Grace, Sex and the City and, even, Seinfeld—and has continued through present day: Coupling, How I Met Your Mother, Happy Endings and New Girl.

While Spaced functions as a mirror of its cultural and historic environs, it was also a precursor to a zeitgeist that was waiting — building — in the wings. A cultural movement that burst onto center stage in the mid-2000s: that of the cool geek.

Tim, Daisy, Mike & Co. were amongst the first on television to celebrate geekiness. Before Lorelai and Rory Gilmore stepped onto our screens, we had the characters of Spaced swapping pop culture references at a dizzying pace, not to mention the brilliant cinematic homages to films, television and music. Spaced references are so numerous, in fact, that the Definitive Collectors Edition boxed set includes the ‘Homage-o-meter”: a set of subtitles for every reference in the series.

Video games, comic books, Star Wars…the characters of Spaced engage with, read and dialogue about these to an excessive level. They dance to the theme song of The A-Team in the middle of a London club. A game of paintballing transforms into a live-and-death war against an arch-nemesis, as represented by the overactive imaginations of Tim and Mike.

It isn’t so much that Tim, Daisy and the rest are considered “cool” or “hip” by others (or even by themselves). It’s that Spaced showcases a group of extremely odd characters with strange behaviours and nerdy qualities—and champions them. By the series’ end, you want to walk over to that house and hang out with the lot of them. 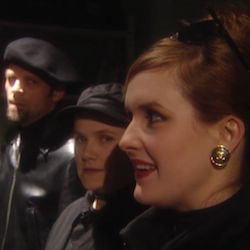 What’s more: you have non-geek characters in a geeky show. Twist, Brian and Marsha don’t engage in the same activities as Tim, Daisy and Mike. There are no expectations or judgment, no snobbery or prejudice. In the episode “Chaos,” the gang works together to save Daisy’s dog Colin, who was snatched by a mysterious, “freelance vivisectionist.” With Darth Vader’s theme from Star Wars playing in the background, Tim orders that everyone is to deck out in black clothing and respond to callsigns.

The fact that Brian and Twist are willing to dress up in all black and take on ridiculous Star Wars callsigns for the sake of their friends is significant. Yet Brian and Twist also maintain their own peculiarities. Brian wears his artsy black beret; Twist brings along her makeup kit (which ultimately comes in handy). While the plot is exaggerated and silly, the episode deftly communicates that relationships trounce cultural stigmas. The peculiar and the normal exist in each character, and it’s entertaining to watch each character shift between them.

In a decade marked by Britpop (Blur, Oasis, The Verve), “new lad” subculture, Spice Girls, and the bold, irreverent (and often shocking) Young British Artists, Spaced was a brave little show that celebrated those that had been historically ridiculed: the average geek. This show wears its loony attributes like a badge of honor, and yet it never takes itself seriously. It’s both earnest and flippant. Even the literal filming style—with its single camera, jump cuts, dream / fantasy sequences and slow-motion — pays homage to the different, the unexpected, the weird. All elements, from characters to script to filming style, support the same sentiment:

You either like this, or you don’t. We don’t care. We love it, so we’re going to revel in that.

What’s somewhat revolutionary in such a statement is its focus. These aren’t the punks of Shane Meadows’s This Is England, whose disregard of societal norms lead to violence. These aren’t spoiled rich kids wrecking havoc on the Upper East Side just because they can. These are average, ordinary geeks that splash about in pop culture references, pontificate about the philosophy of Star Wars and play Resident Evil 2 to the point of hallucinating about zombies.

Pegg is quoted as having said:  “Being a geek is all about being honest about what you enjoy and not being afraid to demonstrate that affection. It means never having to play it cool about how much you like something. It’s basically a license to proudly emote on a somewhat childish level rather than behave like a supposed adult. Being a geek is extremely liberating.”

That is Spaced. Honest, strange, proud.

In 2013, this almost seems quaint. Someone tweeted recently that we live in a “post-Chuck world.” We’ve seen the endearingly neurotic, video-game-playing, graphic-novel-loving Seth Cohen from The O.C., a character that helped define “geek chic.” In 2006, Britain introduced the lovably eccentric and hilarious tech nerds Moss and Roy on The IT Crowd. David Tennant’s Doctor on Doctor Who wore tortoise-shell glasses and had a habit of speaking rapidly, as both a diversion tactic and method of figuring things out. Geek-turned-reluctant-spy Chuck Bartowski entered the scene in 2007. The same year gave us those fan-favorite ubergeeks on The Big Bang Theory. And we’ve had other geeky characters grace our screens, from Hiro on Heroes to 30 Rock’s Liz Lemon.

The friends on Spaced were certainly not the first geeks on television. Even during the 90s, socially awkward and precociously intelligent characters were present (e.g. Freaks and Geeks and Lisa Simpson). Yet Spaced was a true forerunner in its celebration and utter pride of the individual who chooses to dance, skateboard, trip and twist to her own drumbeat.