Like last week’s “Changeling,” this week’s episode of So Weird is representative of the third season’s many issues in contrast to the first two seasons: Annie is again a passive participant in the events, acting mostly as a sounding board for the younger sister Phoebe; the tone is once again comedic, almost to the point of slapstick; and it lacks any interest in exploring the relationship between its paranormal events (in this case, snapping photos to steal souls) and the real myths and cultural beliefs from which the inspiration for these events was drawn. There is, however, a dividing factor between “Changeling” and “Snapshot,” something that makes the latter work in spite of carrying the same systemic issues of season three: the episode’s director.

Melissa Joan Hart started acting at a young age (four, to be precise, in a commercial for a bathtub doll) but her teen and early adult years were dominated by the two shows and roles for which she is best known. In 1991, she began starring as the iconic role of the titular Clarissa Darling in Nickelodeon’s classic sitcom Clarissa Explains It All. In 1996, not long after Clarissa ended, she picked up another titular role, this time in the sitcom adaptation of an Archie comic book series. Sabrina the Teenage Witch aired for four years on ABC as part of its notorious TGIF lineup supported by TGIF’s most popular and well-known series, Boy Meets World (the two even had a crossover night of episodes as part of Michael Eisner’s top-down synergy strategy) before moving to The WB for its last three seasons. Hart’s expertly-honed sitcom timing remains on display today in her ABC-Family show Melissa & Joey, which is set to reach 100 episodes within the next couple of years. It’s unclear if nabbing a director’s chair for an ABC-Disney property was a negotiation tactic as part of Sabrina’s move to The WB, or if it was the beginning of what appears to be a long-standing relationship with ABC-Disney (Hart also executive produces Melissa & Joey), but her presence on So Weird is undoubtedly part of Disney Channel’s larger attempts to control a show that got too dark for the suits. In this case, though, the joke’s on Disney Channel, because Melissa Hart’s noted skill in the sitcom format winds up mixing well with So Weird‘s dark heart, making for an episode that is undeniably absurd but is all the better for it. 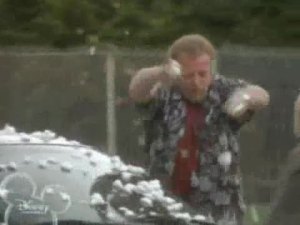 Almost from the minute Ned pulls the bus up to the gas station in the small town featured in “Snapshot,” it’s clear that something is off with the people. The gas station attendant messes with the oil in the bus; a doctor is playing with flags and cones in the middle of the street; an old lady wheels a shopping cart full of stolen license plates, stealing the bus’ as well. Hart’s direction, from the staging of these sequences to her own comedic sensibilities helping along the guest actors, pitches the episode almost relentlessly with pranks piled on top of pranks. It’s certainly one of the busiest episodes of the show; even in the quiet exposition scenes, like when Annie is walking with the younger sister of the camera’s owner (Phoebe, played by Melissa’s younger sister Emily Hart), there’s something ridiculous happening in the background. The fevered pitch extends to the rest of the tour bus as well. As their souls slowly get captured by the camera, the cast lets rip their biggest smiles and devious grins as their characters persistently prank each other and the town. In particular, it’s a good reminder of the two previous episodes where Patrick Levis and Mackenzie Phillips had to play their characters possessed by the chaos-loving Bricriu. Those two episodes, “Will o’ the Wisp” and “Destiny,” are reminders of how much fun So Weird could have even in the middle of something serious. 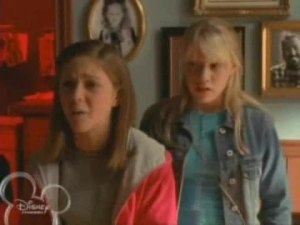 The plot of the episode (the writing is credited to one Richard Clark) is light and makes no mystery out of the whodunnit and why. Phoebe’s older sister Donna wants to use the power of the camera to become a successful photographer. Donna is a one-dimenionsal villain that gets no shading from the climactic scene, which attempts to shoehorn some sibling conflict as an emotional backdrop. The exposition scenes are similarly brief and perfunctory, the epitome of So Weird paint-by-numbers (The key to freeing the victims’ souls? Rip up the negatives. Photography!). Instead, the episode lends itself to being as absurd as possible—throwing toilet paper over houses, setting water-bucket traps over doors that trigger when someone opens the door, switching mailbox numbers around, and other miscellaneous acts of juvenile vandalism. The deft hand of the older Hart sister keeps the episode afloat, while the younger Hart sister provides a surprisingly grounded performance as, well, the younger sister of a megalomaniac photographer.

It’s not uncommon for actors to take the director’s chair for their own shows—David Boreanaz grabbed the seat in Angel‘s fifth season before warming quickly to the chair on Bones, while Jensen Ackles has provided his keen eye to a couple of Supernatural episodes over the years—but Hart never quite got the chance on Sabrina or Clarissa. Her presence on So Weird is transparent as a move by the Disney Channel executives in an attempt to tonally correct the series to better fit in with its companions on the network. But Hart brings a burst of creativity that neatly defies the directives of the Disney suits. It’s laughably ineffective at causing change within the show, just like an act of juvenile vandalism done in order to rebel against a set of specific rules. But it does raise the rather basic question: if the network wanted So Weird to become lighter and softer, couldn’t they have at least let it happen naturally and consistently, instead of bringing in a veteran comedy actress to dance circles around everyone else? “Snapshot” is almost frustrating for how good it is at what it does—perhaps not unlike the talented Melissa Hart herself.

Cameron White is a freelance writer currently residing in Arkansas. He writes about television over on his blog, Wayward Television, and tweets about the awesome power of time travel, bro. His obsession with television was founded in 1996 by The Disney Channel and fostered by his discovery of Firefly in the summer of 2007. He ain’t got no santeria, ain’t got no crystal ball.