Noel: Kerensa, I feel this may be our briefest discussion so far. I say this because I think there’s only one question we need to answer:

Kerensa: IT IS THE GREATEST.

It was campy, ridiculous and SO MUCH WHITE DUDE ANGST. I loved every second of it. Plus, I just finished watching Behind the Candelabra right before and I think Hamlin stole some looks from Liberace.

Noel: It was all those things but still a very well done episode. I mean, hell, Wondy sat down with Hamlin and talked about love and compassion! C’MON. That has not happened in a while. Sure, she talked down a cop-turned-revolutionary and a grieving Japanese internment camp survivor, both those moments were supremely rushed compared to learning about Hamlin’s trouble within the music industry and why this “rad” dude with the happening “pad” and the great “gigs” (why in the world were those words in quotes?!) felt like something out of Season 1.

And Martin Mull was awesome. He was having a ball. 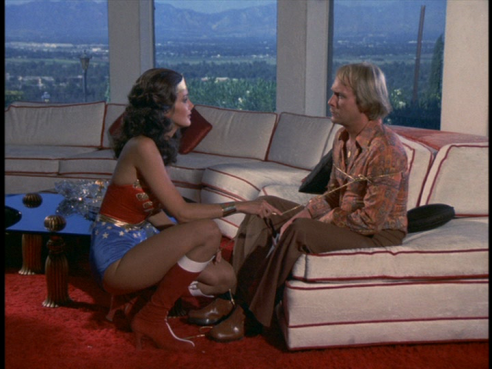 Kerensa: Agreed! And it was such a season one throwback with Wonder Woman actually talking about Paradise Island ideals. And I thought that all those words being in quotes was kinda hilarious? Mostly because Hamlin is a TERRIBLE rock star! His music was really bad.

He was great. And ridiculous. It just was like so many white dude problems–like ughh I’m a rock star and unhappy,etc.

What did you think about the lack of Steve in this episode?

Noel: Hamlin’s music was amazing! It was about love and….love…and had a flute solo…and a giant paper mache snake! I’m sorry. I really can’t get over this episode. 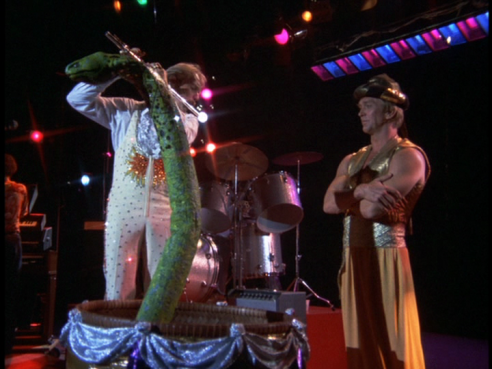 I think the lack of Steve was just…I dunno. I have to assume that between last week and this week that Lyle Waggoner was making a movie (they’re so happy they can just go to LA now for NO REASON) or was in a play and needed to have a reduced role. Certainly I think between Joe, Joe’s daughter, and Hamlin and his minion, Steve would’ve made an already crowded episode very crowded. It did allow the episode to focus almost exclusively on Diana, which was pretty great to watch, actually. I’ve been hemming and hawing about the increased Diana/decreased Wonder Woman, but I felt like this episode hit a really nice balance.

I have to admit that I was surprised at how much I liked it since it was very campy, but it was in a way that felt in keeping with the Season 2’s general approach without making things too ridiculous. In other words, hypnotic flutes and devices that turn doors and safes into dust I have an easier time with than nuclear powered fencing robots. It was also, like last week’s, more of the time, even down to the innocuous rock music is creating a corrupting counter culture.

We had a bit more of Joe this week since we didn’t have Steve, either. What do we think about Joe? I’m sort of wondering how he got this job, to be honest. Perhaps Manta was right about Joe being a relic after all.

And one follow-up question: How many shots was the trapped in a spinning velvet chair thunderclap twirl worth? And a follow-up to the follow-up: What sort of recording studio has that sort of thing? The 70s, man. The 70s. 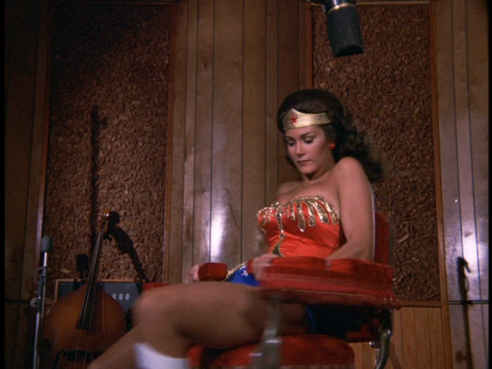 Kerensa: Hamlin’s music was so ridiculous. The giant paper mache snake was incredible! He clearly had a large budget for special effects in his show.

I agree–it would have been pretty crowded with Steve. But Joe’s kinda dull. And I don’t really understand how he has his job either? He doesn’t seem to really get out it all works very well. I know I keep blaming everything on white dudes–but it’d hard not to? I’m guessing that’s why Joe still has his job….

It was super campy but it was still rooted in some sort of realism. I thought the commentary about aging rock stardom and fan culture was kinda interesting–although very female focused and not in a great way I would say.

Diana was twirling ALL over the place in this episode. I would say that the chair twirl was worth at least 3-4 shots depending on how well you hold your liquor. Yeah, I’m guessing it’s a symptom of the 70s because that chair seemed like it belonged in a weird sex dungeon more than in a recording studio? But I guess they could be interchangeable? It was the 70s.

Noel: Well you mention the female fandom, Hamlin’s “little birdies”, so let’s talk about them a bit! First off, we need to mention that Joe’s daughter was played by none other than Jan Brady herself, Eve Plumb. As I’ve mentioned before at some point or another, The Brady Bunch was never really my bag, so I don’t have much of a connection to Jan or Plumb. I can’t remember if you were a Brady fan or not…

Anyway. I’d like to hear your thoughts on how you felt about the representation of the women, and maybe Eve in particular, who seemed pretty resistant to Hamlin’s mind control at times. What stood out to me was the show’s decisions to engage in some serious rapid cutting between women’s faces and then lingering shots of Hamlin’s flute. It did a nice job of selling the supposed intensity of Hamlin’s mind control, but my film studies’ education kept coming back to me: “IT’S A PHALLUS!” (Fun fact: In a film studies class, the answer is almost always “Phallus.”) But the tight shots, tight focus, slow pans over the flute…man, fetishization in the extreme. 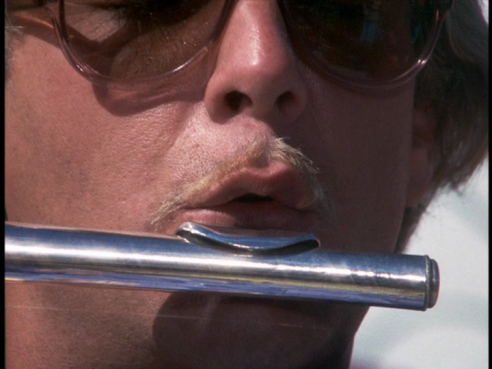 Kerensa: OMG I DIDN’T REALIZE THAT AT ALL. THAT WAS JAN!?! And I wasn’t really–I’ve seen some of it but obviously not enough to recognize her.

I mean I felt like it represented fandom as something that was solely female and that seemingly lacked motivation other than blind lust. And lust over Hamlin is something that doesn’t register for me. I think it could have been more interesting if we had some reasoning more than that? But maybe that’s the point–is that there isn’t any sort of good rationale for it. It’s just about ALL THE FEELINGS Noel!

I liked Eve (Was it Elena?) and I liked that we got to see her resistance to his mind control but simultaneously wanting his approval.  Although I also thought she seemed like she should be smarter than to have even liked Hamlin’s music in the first place. And yup so much PHALLUS things going on. Blergh. I can’t even go there.

Another thing that was interesting subtext was the idea of how fleeting fame is. I mean Hamlin was getting older and eventually things would change and leave him in the dust. While he never explicitly says this, I thought it was there weighing on him the whole time.

Noel: The idea of fame, I think, is the key to the entire episode. Hamlin’s concerned about the “rip-off” culture of the industry and how it takes away money and fame from creators. He is only trying to get his, as it were. By the same token, his groupies/robbers, are hitching a ride on that same train, and they’re being exploited for it in an analogous way that Hamlin’s exploited by the record company. Everyone’s using everyone to fulfill some need, some missing part of their lives, and the episode does a decent job of showing how dangerous and fragile such a mentality is.

I didn’t even feel like Hamlin was doing anything sexual with these girls, just using them to rob the venues and would have let them take the fall if they were caught. (Frankly, I think he was more interested in Carl.) Of course, given the intended demographics for the show, and untoward sexual activity would’ve been out of place. 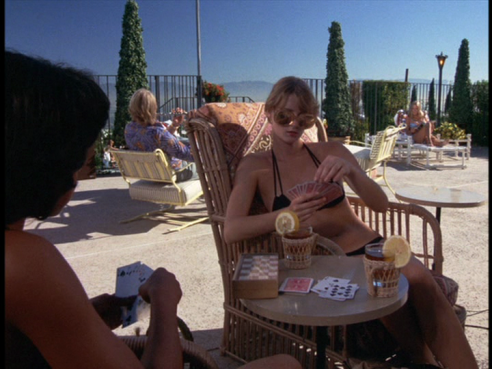 I also don’t think Hamlin was doing anything sexual with the girls either. He apparently needed a bunch of young women to rob things for him? You did?! I didn’t get those vibes between Hamlin and Carl…

Yeah, Wonder Woman as a whole seems to be DEATHLY afraid of sex.

Noel: Nature of the show. It wants to be family friendly while still giving adults something to gawk at.

Speaking of gawking, what say you about Diana’s outfits this week? I particularly liked the solid dress she had as she attempted to infiltrate Hamlin’s mansion (I liked the use of the Wonder Woman outfit as a costume here), but not nearly as much as I liked the blazer-almost opened blouse-choker necklace combo she was rocking when she investigated the studio. 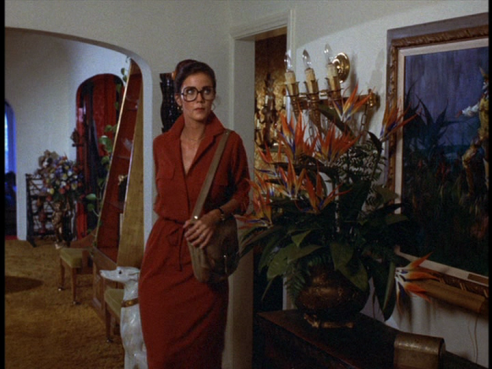 Kerensa: Yeah, I know I know. But that’s so boring…jk.

I loved the dress she wore to infiltrate Hamlin’s as well. I totally want it. I did not like the choker combo–a choker never works for anyone. Not even Diana. I really liked Steve’s jacket in the final scene as well.

Oh! Two other scenes I wanted to talk about. I thought that scene where Wonder Woman and Carl basically play catch with that speaker was HILARIOUS. And that end scene with the kid and the flute was a pretty fitting way of the episode.

Clothing thoughts? Thoughts on those scenes? 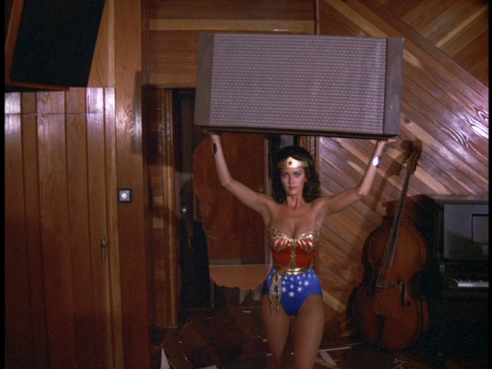 Noel: I’m not a fan of chokers, either, but I liked the rest of the outfit.

I loved the Carl fight! We hadn’t had a really solid fight this season since the premiere, so I was happy to see Wonder Woman flex a bit of muscle in a bout for a change. And she didn’t even have to take Carl out herself! That microphone stand did all the work!

It was a fitting way to end the episode! It was both funny and also just spooky enough considering everything that Elena had gone through in the episode.

Kerensa: It was so great! She was just casually throwing that speaker around.

It was kinda spooky right?! I think that’s why I liked it so much. While we got our usual Diana smiling freeze frame, I liked that there was a bit of a dark edge to it. 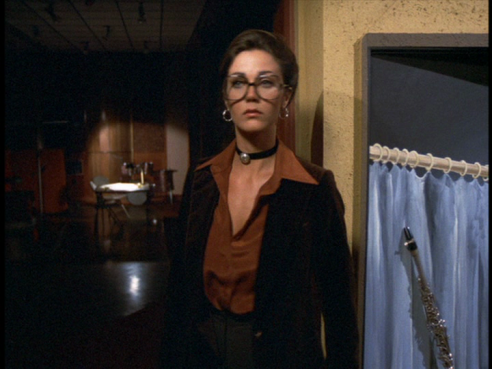