About the only point against “The Secret Life of Buddy and Sally” is the way its story hinges on a poorly handled piece of misdirection. This is not a small complaint by any means, and it’s more than a bit infuriating to watch Sally and Buddy behave in a manner that suggests they’re hiding something big from Rob, only for them to explain later on that they were just concerned people would make fun of them. In particular, Buddy’s adamant (he even seems seriously angry on one occasion, for no reason I can think of) wish to keep their weekend performances as “Gilbert and Solomon” a secret just doesn’t make a whole lot of sense once we discover the truth. On a narrative level, I would not exactly call this episode a resounding success. 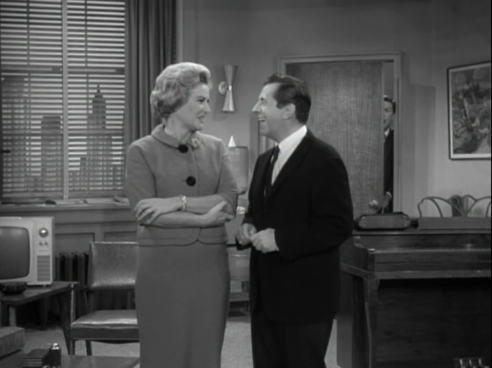 That said, it’s still so good, featuring just a ton of hilarious lines, some stellar facial comedy, and not one but two of those memorable performance scenes that Dick Van Dyke does so well. I may have issues with how Rob Petrie comes to be listening to his staff at keyholes, but the exchange between him and Laura in which they discuss his eavesdropping makes it all worthwhile. And however contrived the moment may be, the scene in which he hears a conversation that heavily implies an affair between Sally and Buddy is just a great piece of comic acting by Dick Van Dyke. Then there’s the delightfully ridiculous sight of Laura and Rob donning sunglasses, as they look for confirmation or denial of what Rob suspects.

They get the latter, of course, as the team of Rodgers and Sorrell perform their charming and funny routine, in a scene that takes up roughly a third of the episode: time that just flies by. As I’ve noted before, the willingness to let scenes play out for an extended period of time is something we don’t see as much nowadays. And while it’s certainly risky to hinge an episode’s success on one scene, Dick Van Dyke shows time and time again how rewarding this approach can be, as long as the material is good. It certainly is here: a combination of jokes and singing that is just infectious, and performed with charm and wit by Rose Marie and Morey Amsterdam. 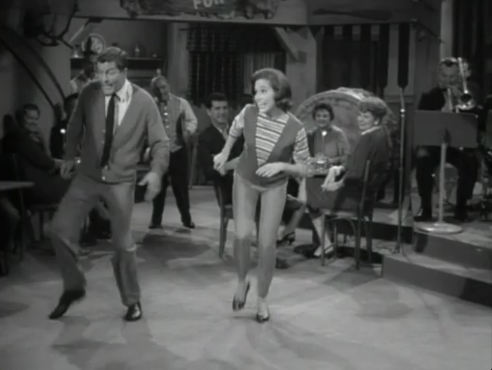 As if that wasn’t enough, “The Secret Life of Buddy and Sally” then adds dance to the mix, in the form of a delightful number performed by Moore and Van Dyke in the tag scene. It’s beautifully captured in a series of distant framings, allowing the gloriously synchronized dance moves (including a couple of remarkably quick and complicated steps executed with precision by Van Dyke) to be seen perfectly. And it ends the episode on a note of such utter joy that any plot issues are basically swept under the rug. This is just tremendous TV.

Next Week: “A Bird in the Head Hurts”

One Response to “Review: The Dick Van Dyke Show, “The Secret Life of Buddy and Sally””