The Dick Van Dyke Show is rarely at its funniest—or best—when it focuses on Laura and Rob being parents. And the early sections of “A Bird in the Head Hurts” are no exception. For one thing, it features a lot of moments of Richie screaming about a woodpecker that he claims is attacking him when he goes outside. He acts as though it’s the end of the world, which is: a) how a small child in that situation might well act. b) just about the most grating thing on Earth. In general, little kids are not particularly funny characters, and Richie Petrie rarely does anything to disprove that rule.

His parents fare no better in the early going, as they debate what to do in a calm, down-to-Earth fashion that generates next to no laughs. In fact, once you’ve seen the whole thing it retroactively becomes immensely irritating to watch them wonder what the cause of this could be. Is it a cry for attention, or just simply the imagination of a child? Maybe. Or maybe it’s the fact that a bird has been attacking him. That’s right, neither Laura nor Rob even bothers to consider the idea that the bird might, you know, actually exist. I don’t know about you, but I think I might have ruled that out first (what with Occam’s Razor and all that), before jumping to all these other explanations. Instead, we’re treated to the characters brainstorming, and Rob coming up with a plan to pretend to kill the woodpecker, before finally Millie breaks the news that, as it turns out, their son isn’t just making this up. Great parenting, folks. Really great. 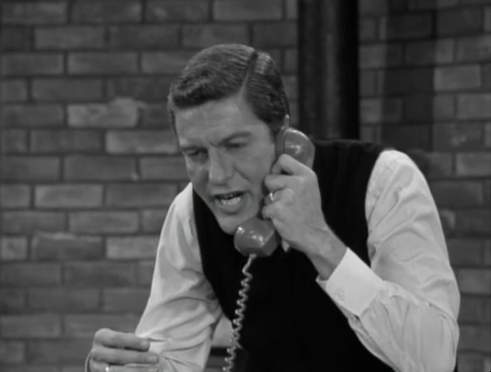 So it’s not the most auspicious of starts. But after that revelation, the episode shifts gears, switching from parenting dilemma to catch the bird dilemma, and becoming far funnier and more engaging as a result. The transition is marked by a stunningly hilarious scene in which Rob attempts to get someone to come over and assist with the problem, only to have everyone he calls assume it’s a practical joke. It’s at once poetic justice for not believing his son and simply an opportunity to witness the glorious comedy of Rob Petrie becoming ever more frustrated with each brilliantly timed “hello?” he utters. Finally he’s had enough, and proceeds to break out his “doddering old man” impression from “Buddy, Can You Spare a Job?”, telling the game warden that people are “shooting birdies”. Whether the callback to that classic season one installment was intentional or not (it probably wasn’t), it’s a brilliant way to conclude the episode’s funniest scene.

This isn’t to say that what follows is disappointing, as it’s not. The game warden refuses to do anything right away, leaving Rob to attempt to scare the bird away by banging on a pot (leading to a great visual gag in which we see the results of this), before he and Laura do some brainstorming, which leads him to come up with a way to catch the woodpecker. He then proceeds to explain how he did it, in the fashion of a mystery denouement. All of this serves to prove one fairly simple (though not completely set in stone) truth about this show: it’s a lot more fun to watch Rob Petrie the detective/comedian/dancer/you name it than Rob Petrie the parent. Always has been, always will be. 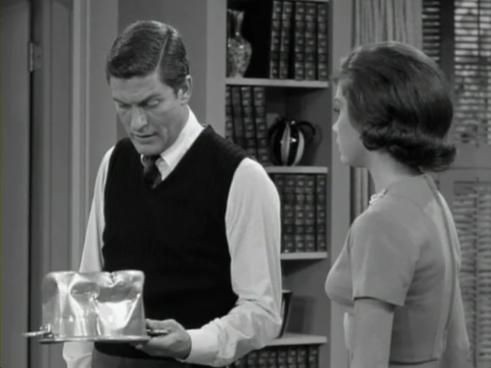 So while “A Bird in the Head Hurts” isn’t nearly as good as last week’s installment, the quality of the jokes in the second half is ultimately able to overcome a first half defined by whining, lousy parenting, and general boredom. (Although that first half does have the one terrific scene of Sally, Buddy, and Rob being given the wrong sandwich order. Though once again, they then promptly disappear for the rest of the episode) Not one of the show’s finest moments, but many sitcoms—both then and now—would be happy if their slightly lesser episodes were even close to this level.

Note: Heading back to school this week, so we’re switching to an every other week schedule for the time being. I’ll be back in two weeks with thoughts on “Gesundheit, Darling” (another good one, if I recall correctly).

One Response to “Review: The Dick Van Dyke Show, “A Bird in the Head Hurts””