Kerensa: I’m not entirely sure if I should apologize for picking this episode. There were some parts I really liked and then the rest was just like zzzzzzzzzzz.

Noel: Certainly it’s more interesting to discuss, I think, than “Mind Stealers From Outer Space” in only for the creepy and quasi(?)-rapey vibe of the hypnotic massages.

I didn’t find the episode snoozy, but just…oddly paced. Maybe it was the lack of a real physical altercation after the actually-pretty-fun gas station scene? Chasing down run-away golf carts and rigged horses (poor Satan) doesn’t exactly seem like a great use of Wonder Woman’s abilities.

Kerensa:SO RAPEY. Also, that guy and his chain in general gave me the creeps.

Maybe oddly paced is the right way to go about it. You are totally right that after that gas station scene the action certainly goes downhill.

I thought there was a lot of super interesting elements in this episode. I liked the sham marriage that Diana has to get into with Christian Harrison (totally hot in like an 80s prepster way). It was fun seeing her kinda have to do things that are obviously totally out of her comfort zone aka be in a relationship. That was the first time we’ve ever seen Diana kiss anyone correct? However, Diana was just SO awkward with all these things she needed to do–like when they first get into the honeymoon suite and he offers her wine. I thought it was so uncomfortable.

I also liked the general Stepford Wives vibes of the plot in general. It’s an interesting concept–having the wives–basically holding all the power. And Dolly is the HBIC of this whole thing–that scene when she’s talking with creeper chain guy was amazing. I loved her.

Were there things that stood out for you in the episode? 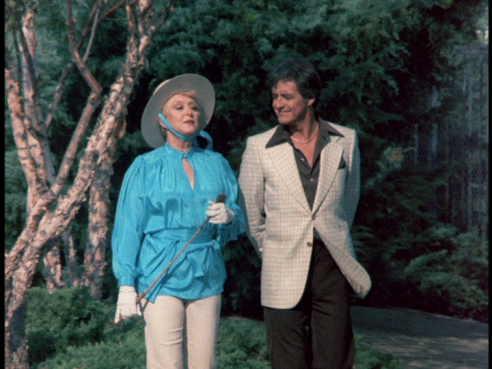 Noel: Henry Darrow plays David Allen and, as he has excelled at over his career, he exudes sleazy charm. He hits all the right notes of being a man in control, smarter than everyone else around him, and only gets sloppy when things fall apart. Fun reminder: he was in “The Bushwackers” back in Season 1, and was the guy who got the son to turn on Roy Rogers. He’s so charismatically dastardly!

In fact, I think this is a pretty strong episode for the guest stars over all. You mention Dolly, played by Oscar winner Celeste Holm, and her scene with David Allen, and you’re totally right: It, along with the gas station fight, is probably the episode’s strongest scene, and it’s just two powerful people talking and lying and making threats. Even John Getz as Christian is the right level of affable, moony over Diana lates 70s white bread guy, but still feels somewhat competent — he is the one to disarm and stop David Allen, after all.

I want to talk about Diana and Christian some more, but since you mentioned things that stood out for me: Lynda Carter’s body stood out a lot this week. I’m pretty sure her swimsuit had a deeper neckline than the Wonder Woman bustier does, and her tennis outfit as all sorts of objectification-tastic, from the jiggly tennis sweater to the short-short skirt to show off her legs. I mean, you could say “Eh, whatever, sign of the times,” but as if to emphasize how short the skirt is, some other tennis ladies walk by, and their skirts are way longer than Diana’s.

Kerensa: I knew he looked familiar! And exuding sleazy charm may be an understatement–I think the man IS sleazy charm embodied. He’s just so good at it.

I agree–all the guest stars in this episode were really great. I also thought Dolly’s scene with her husband at the end was so great and heartfelt.

Oh, that swimsuit was super low cut. There are a couple things I would question re: her body being on display. First: Diana and Christian are a younger couple and at this place they were staying at everyone else seemed a lot older? In comparison, her clothing would stand out. Also, do you think maybe they are sexing up Diana’s wardrobe? I feel like, as you mentioned when we first started this season, the show is really shifting Diana as a “sexy lady spy” and less as Wonder Woman. I mean I feel like she’s basically running everything, Steve’s really a mere blip at this point and Wonder Woman kinda only exists at this point to come and throw things around.

Noel: I do think they’re playing up “sexy lady spy” a lot more so Diana (and the show) better fits into the mold of jiggle TV. It’s just that she feels extra-jiggly here. Now that you mention, and I didn’t pick up on it, but she and Christian are awfully young compared to most of the people at the Hacienda Resort (when Christian said “We’re going to be late to the hacienda.” I thought he was just being a massive tool), so you do make a narrative case for the clothing selection, though I’m not sure how consistent that’s executed. I’d have to go back and look…

As to Diana and Christian, it was very awkward, and in weird ways. Like, she’s top agent for I.D.A.C. is acting like she’s on a first date that was the result of a Meet Cute on Craigslist and so he is, for that matter, so seems a little odd. Him being awkward and horrible I sort of understand since he’s not a spy (just some vague, powerful adviser for the president), and I do think the show tries to play that up so you keep thinking that they’re actually married instead of just faking it until — whew! — they can do the reveal and split the two up, even if Christian is, in fact, smitten with Diana.

That being said, I like your idea that this is largely because Diana has zero experience with the intricacies and dynamics of dating and romantic relationships, but isn’t that just a little sad, too?

Kerensa: I’m not sure how consistent it’s executed either, but I did think they stood out quite a bit at the Hacienda–so much for being undercover!

It was SO awkward. Painfully so. I actually didn’t think he was that horrible? He just seemed kinda awkward–but the situation obviously in general was awkward which made both of them even weirder.

I do think that Diana’s lack of experience certainly colors the awkwardness between the two of them. Oh, it’s super sad. And I think it also can come back to this sexing up her wardrobe. They’ve been putting her in all these low cut swimsuits and short skirts but Diana has literally no sex appeal. I mean she’s gorgeous, which is a completely obvious statement, but she’s just so sanitized like that whole portion of emotion/desire has been completed erased. It’s an annoying contradiction I guess–on one hand it’s nice to watch something where the focus isn’t on the leading lady being swept up in romantic relationships but Diana is also so devoid of any sort of sexual/romantic emotion to the point where it feels like she’s unrealized. And I know we’ve talked a bit before about how you don’t see portrayals of male superheroes having this problem.

Noel: Well, I think it raises some interesting contradictions, as you put it…though I suppose the contradictions only come through if we’re still viewing Diana and/or Wondy as a feminist figure. Which I will continue to do until the end of time because she’s Wonder Woman.

Diana is a chaste sex figure. She’s meant to be looked at and enjoyed in skimpy and revealing outfits, but as a character, she seems clueless about the other aspects that are related to romance and sex, even while they tie back into the choice of clothes. I’d get this a degree if it were Diana’s first time to man’s world, but it isn’t. She’s been to man’s world before, romantic vibes flitted around the edges in Season 1 only to be largely squashed here, not even in the sense of basic sexual attraction or interest. And if she’s been consuming and exposing herself to 1970s media, then there’s even more insight she can gain, and commentary to provide. It’d be one thing if she was commenting on this, as a character and as a woman, but she isn’t, and that leaves me with no avenue to know what to think about this beyond: The show wants her to be sexy without being sexual.

Kerensa: I agree completely. It’s super frustrating though that that paradox (sexy without being sexual) is one of those expected gender conforming roles which is what Wonder Woman is supposed to be commenting on! And there’s absolutely no commentary at all.

I was happy with this episode that while Diana didn’t really interact with Dolly at all–it was really nice to see another woman for once.

Noel: No commentary! None. Sigh. She’s been so thoroughly de-politicized. Which is a habit people fall into with the character. It seems that writers can’t grasp that feminism doesn’t have to be ham-fisted or ardent in its representation on screen, or on page.

And a woman of significance, as you note, one important enough to the plot that it’s worth trying to kill her! Those are some serious stakes.

I suppose the last main point we should discuss (unless you have other thoughts, and I’m all ears) is Diana’s wedding dress. I’m going to leave this to you, but I will chime in and say that I thought it was pretty ridiculously horrible, at least with that full-neck ruffled collar and the little…bit of fabric attached to it. Take those items away, and it might’ve been a very sleek summer wedding gown. At least in my untrained eyes. Also: men’s wedding fashion hasn’t really changed all that much at all, has it?

Kerensa: That wedding dress was SO awful. First, it looked like she was wearing like a weird robe over her dress. And that NECK RUFFLE THING. The dress that was happening under it looked much better. Thank god it was a fake wedding.

And it really hasn’t although those striped tie/bowtie/scarf/ascot things the dudes are wearing aren’t much better.

We told you we were bad at planning. We said that “Diana’s Disappearing Act” would be next, but we’ve changed our minds. Here’s the order for the next three weeks to close out Season 2:

We offer our apologies to IRAC and Rover (Wonder Woman gets a robot dog companion, oy) and Gary Burghoff for skipping their episodes.