Kerensa: UM, so that was an episode where someone could turn gold into lead, there was weird funhouse-esque shit and Ed Begley Jr. could get it? And wanted to very much get it with Diana.

It was insane and weird but also kinda boring. This show is going to give me an ulcer.

What were your first thoughts?

Noel: That the entire time the episode was on, I kept thinking, “I really want to watch Lupin III: The Castle of Cagliostro.” Which, I am in fact watching as I type this message.

I feel like we got a lot of neat sets and some decent examples of the conjuring arts (college kids in the late 70s love pantomime), but a really sloppy story that needed a few more drafts to get going, especially since the catalyst for the episode — the necklace — was never satisfactorily explained.  I mean, thank goodness the bad guys magically tracked that important necklace to Diana. Had they just left her alone, they might’ve gotten away with EVERYTHING.

Kerensa: Noel, I don’t know what that means?

We did get really cool sets and some of the costumes were on point. But I agree–it was such a sloppy, weird story. Yeah, when that necklace showed back up later in the episode, I had completely forgot that it was even there! It all was so bizarre.

But one thing that was interesting that kinda picks up from our discussion last week is that Diana uses her sexuality (well you know in a Diana sort of way–vague flirting) to get into this whole circle. In the beginning of the episode, she’s totally flirting with these dudes to get information. Until Ed Begley Jr. comes in and kinda screws it up by flirting with her. Any thoughts on that?

Noel: It’s a movie. Anime. First feature film from Miyazaki. Great stuff. You can watch it on Hulu.

It was not only narratively sloppy but technically sloppy, too. I feel like Cagliostro was the victim of some really bad ADRing, and they didn’t do a great job hiding the stunt people this week, either.

As to the sexuality, she was totally flirting with the Emir, and it was nice to a degree. It’s sexuality used to a means to her spying end as opposed to her own desires. But, hey, progress!

But this leads me to a larger point about this question of sex and sexuality. We’ve been basing our expectations of Diana’s experience on her going to man’s world during World War II and the 1970s, but as this episode reminds us, and other episodes before it, Diana has apparently left the island a gazillion times! Cagliostro mentions her facing off against ancestral namesakes, and she’s mentioned hanging out with Greek philosophers. So, obviously, even if she’s never had sex, she must’ve had centuries of exposure to sexual cultures of the time. I have a tough time buying her naivete now. 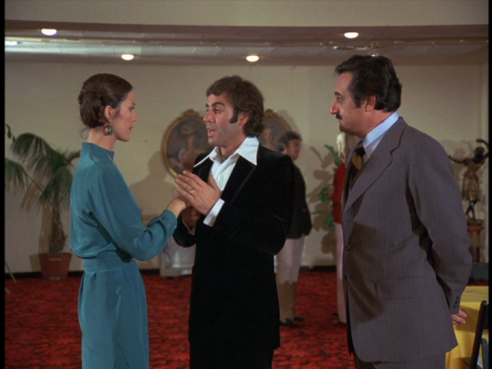 Kerensa: I will watch it!

That’s such a good point! Totally didn’t realize that. It really does undermine this weird naivete they keep giving her. Ugh so dumb.

Speaking of naviete, let’s talk Ed Begley Jr. –what did you think about him in this episode?

Noel: I thought he brought a lot of energy into the pretty standard role of the enamored, well-meaning fanboy. I would’ve liked it had he gotten some measure of victory by breaking out of the cell with his electric pencils (I loved the snarky Noble-winning metallurgist with a backbone of steel), but I’ll settle for him being cute and have really really blue eyes that I never really noticed before.

What’d you think about him? He does come back in a Season 3 episode.

Kerensa: I agree. I think he brought a lot into it as well. He was endearingly goofy and charming. He flirted with Diana a ton but wasn’t super annoying about it. SUCH blue eyes!

And getting his magic trick right at the end! So adorable–and wanting Diana to see it.

We are going to have to watch that Season 3 episode.

While we are talking about him, what about that CREEPY ASS ROOM they lock him into?! That was scary.

Noel: That room was, again, one of those examples of a great set in the episode perhaps being better than the episode it was in. Brickwalled doors, busts bursting into flames and a manically chuckling midge, it was all very creepy…

…But I also felt like it was the first time that we were veering to the edge of the 1960s Batman (of which this show shares a producer in Stanley Ralph Ross). The episode does not have the degree of camp that Batman had, but it certainly was heading too too close with the alchemy element, the magician stuff, and so on. Perhaps it was the veneer of the political elements with oil and economic turmoil (Wonder Woman jinxed us!) that kept it from toppling over the edge?

That political veneer did give me my favorite scene of the entire episode, though, when Cagliostro meets with the emir. While I’m jabbing the episode for being perhaps too silly, this scene hit the right notes of comic book ridiculousness for me, especially insofar as I felt like the emir was just really tired of Cagilostro’s theatrics, but was tolerating them for the money anyway. I sort of loved it.

What else did you pick up on in the episode? Certainly we could talk about Eve, Steve’s new assistant, but I think we may be better served by talking about her next week. What about Cagliostro’s assistant? Wonder Woman actually interacted with another woman this week! Who wasn’t possessed by aliens or under the influence of flautist rock stars!

Kerensa: I could see that. I’m not super familiar with the 1960s Batman, but am aware of the levels of camp involved in it. That was a really good scene that you mentioned. One question I’d like to pose to you regarding Wonder Woman overall is that mix of camp/politics–I’m not super familiar with other superhero shows but do any others straddle this line or do it well? I think that, at least in the first season, Wonder Woman did have a good balance but as we’ve seen with the second season thus far that has rapidly dissolved to varying results. What do you think?

I’m not sure what else I got out of the episode. I do think we will have to talk about Eve for sure next week. That was exciting to see Wonder Woman interact with another woman! Even though if it wasn’t very much. How depressing is it that we are grasping for her to speak with another lady?

Noel: Well, we can take a look at the superhero roundtable for some insight into superhero shows at time! I think a lot just depends on the producers and intended audience. The Incredible Hulk, stayed more serious to the best of my recollection, with humor dabbled throughout, but never veering toward camp/silliness, and it is probably the best contemporary of Wonder Woman to look at for comparison that I can think of, at least when it comes established superhero shows.

But then there’s the Bionic Woman to probably weigh in as well, but I just haven’t seen more than a handful of episodes, so I can’t speak to how well it tracks to Wonder Woman.

It is pretty depressing. It certainly speaks to, as you alluded to, the varying results the show has been putting up in our discussions.

Kerensa: And as we’ve talked about not that many superheroes have such strong political ties as Wonder Woman does–so it’s inevitable that there would be more of that within the storylines. Do you think the incorporation of camp takes the character less seriously?

I don’t think so because who doesn’t love some good camp? But that lack of political bite as of late, has been, a huge bummer.

Noel: I think it takes the politics less seriously, but as we’ve discussed, it happened to her before, so it’s nothing new. It’s a tricky position because I’m not a fan of “This character needs to be portrayed this way all of the time!” mentality, but at the same time, the…”burden” of representation becomes an issue with Wonder Woman, and that’s certainly something that I think makes creative types who are worried about properly representing a feminist message shy away from even attempting it in the first place. 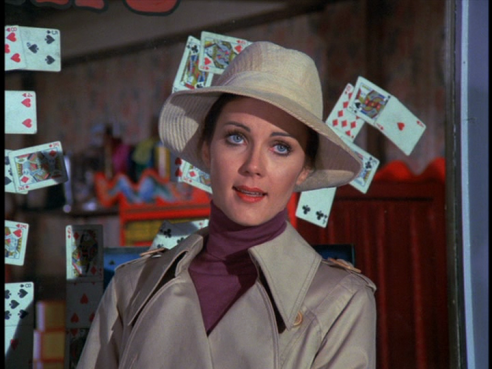