FACT: The Price is Right is one of the greatest and most popular game shows in history.

FACT: Some pricing games on said game show naturally rise to the top above others.

FACT: Plinko is one of the very best pricing games on The Price is Right and elicits more excitement than any other game when announced.

THEREFORE: Plinko is one of the greatest game show segments of all time. It is, it always has been, and it always will be, from now until the sun burns away and the earth falls into irrevocable darkness and decay. That’s just science.

On September 27, The Price is Right is giving the world an episode that many people hope could occur day in and day out. It is about to be game show Christmas, and I for one could not be more excited. Because on that lovely Friday morning between the hours of 11 and 12 in the morning, there will be an entire hour of Price made up of Plinko and Plinko only in honor of the 30th Anniversary of the game. It wouldn’t be unreasonable to assume you will all attempt to take the morning off of work, or at the very least set your DVRs to “awesome.” So to prepare for this day, let’s look at what makes Plinko great and why everyone who makes it past contestants row hopes and prayers that they will be lucky enough to drop those discs into an oversized carnival game.

Before we get into exactly why Plinko is so great, a little background on the game in this, its 30th Anniversary year. Plinko was created by the late producer Frank Wayne, and on its creation had the highest possible prize money winnings in the history of the show. CBS used to have limits on game show winnings, with the amount rising every few years until they were abolished in 2006 (after which The Price is Right has taken full advantage of unlimited prize money with million or multi million dollar opportunities during special event airings).

Bob Barker was the first (obviously) to champion and promote the game for the audience and his enthusiasm for Plinko went a long way towards the desire for it to return over and over. He coined the name “Trusty Plinko Stick” for the device used to knock stuck discs free from the board and consistently knew exactly how much to say and not to say during the disc drops. Even though Drew Carey has done an extraordinary job as Bob’s successor, the happiness on Barker’s face when contestants won big is still the original hallmark of excitement on the show. But beyond the enjoyment of the game and the history behind it, there are some concrete things that have made Plinko into the genuinely great game it is.

As The Price is Right gets on in years the show has been attempting to subtly add more games here and there in order to prepare for when certain games grow stale and are ushered off stage left and on to the great studio audience in the sky. Certain ones have been successful in the early stages (Rat Race), but many others have been tested and discarded due to being overly complicated or, worse, just plain boring. The games that have managed to succeed and thrive are ones that share the same characteristic that makes Plinko so easy to get pumped up for: simplicity.

The simplicity is inherent in the name, just like many other games on the show. Its namesake comes from the sound the discs make when they drop through the spikes on the board. But the requisite skills needed to successfully complete a game of Plinko are about as extensive as the thought that went into naming it. Contestants automatically start with one disc, so they have a shot at $10,000 from the get go no matter how well the guessing portion goes. Guessing the correct price for four products is easy enough, as each contestant is giving a fake price and has to decide whether the first or second number in the price is the accurate one. Again, easy enough, seeing as the audience’s assistance in this portion is not so much crucial as it is a huge bonus. Any contestant who ignores the audience (and they do exist) is just plain stupid. You are not smarter than the consensus opinion of 300 people, random contestant!  You are not! 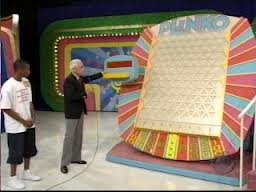 After guessing it just gets easier and easier. Take the discs, climb the stairs, drop ‘em. This is not rocket science, or even as hard as drawing a picture of a rocket. Some people definitely stress themselves out way more than is necessary on top of the board by attempting to guess how their chances would increase or decrease based on where they decide to let the disc go. However, because the spokes and sides of the board are designed specifically to make this a waste of time, it only serves to make people more nervous or angry at themselves when they don’t get the grand prize. Not that this is always a bad thing, people having freak outs at the top of the board because they were this close is usually more entertaining than people who actually win, even though the former doesn’t happen as often as the latter.

In addition to Plinko being the easiest game to participate in, it is also the easiest game to win any amount of money in. During many of the other games on The Price is Right it turns in to an all or nothing endeavor. You either get the car or you get nothing, you either choose to take the $500 in hand or continue trying to the $1,500, but it’s also possible to end up with squat. Most are set up so that if the contestant guesses wrong on a price, the game is over. Certain games have second chances but there are no safe levels, no fall back money. You either get it right the first time or you get a pitying stare from Drew and a polite “see you at the wheel.”

But this is not the case with Plinko. No, Plinko is the “get rich quick scheme” of the moneymaking world of game shows. Even if you manage to get all the prices wrong during the guessing portion you still have one disc that was given to you from the start to drop. The majority of the time contestants have a minimum of three discs by the time they reach the board, if not four or the maximum five. The chances of hitting the no money slots every time a disc drops are very slim. In fact, it’s only been done four times in the history of the game; in 1995, 1996, 2003 and 2008. Four times in thirty, with the amount of times it’s played? Yeah, it’s a good bet you’re going to go up and win some money if you’re lucky enough to play…

…But you will need luck. There isn’t any definitive statistical proof that Plinko is played less often than any of the other pricing games, but it sure does feel like it sometimes. More contestants stand in line, cheer from the audience, and hope to get picked wearing Plinko theme shirts than everybody else combined. And yet it seems like it only gets played once a month, when in reality that average is probably closer to once a week. With so much fuss made over Plinko puns on contestants row and the ear-piercing shrieks that occur on stage you would think the rarity of this game is akin to that of Halley’s Comet when in reality you could probably find a friend of a friend who played it without too much trouble. Getting past contestants row and running up to the stage, then being told you’re about to play Plinko is like crack. Or it must be because it’s the most desirable outcome that exists on The Price is Right. People who have been told they’re going on an exotic vacation or won a new car don’t get as excited as people who are told they simply have the chance to win an indeterminate amount of money.

The appeal alone of Plinko is something crazy to witness, really. One of my old teachers was in the audience during a taping when they announced Plinko and she swears it felt like she was about to burst an eardrum. Do people who have had the good fortune to play have yearly meetings to discuss how blessed they are? Is it like a cult? Do you need the YouTube video of your appearance to get through the door? Do they not allow entry to the people who won no money? I’m curious. Most networks would kill to have an entire game show receive this much excitement and popularity, and CBS has a mini-game within a show that has that much acclaim. The excitement Plinko generates also serves as a self-fulfilling prophecy of awesome; it’s exciting to play because it has always been exciting to play and it always will be. Games that people don’t cheer loudly for are less fun to play for obvious reasons, so 30 years of people collectively losing their shit because of a huge board with pegs in it is enough to propel that game to the top of the charts popularity wise, and gives many of the other pricing games no shot at ever reaching that peak (except possibly the mountain climber game, no pun intended).

So there we have it, a few of the big reasons that Plinko is one of the most popular games in game show history, and why The Price is Right is going to such great extents to give the people what they want on September 27. I know I can’t wait for an hour chock full of guessing prices, dropping discs, and absolutely nothing else. They’re bringing out the big guns too: extra discs, special discs (that would possibly function similarly to how the gold ball in the Home Run Derby works), and huge cash prizes. The Price is Right throwing what amounts to a huge party for their crown jewel helps continue the legacy of the game while simultaneously throwing an anniversary show where there otherwise wouldn’t be a reason for one. Here’s hoping we get 30 more years of greatness after next Friday comes and goes. And now that we’ve discussed the definitive number one pricing game, be sure to come back next month for the second half of this The Price is Right discussion when this column ranks all of the other games based on popularity, game play, and overall amazing!

One Response to “Game Night: Plinko!”