Ideally, you wouldn’t have to choose between quality and quantity. Everybody knows the saying “too much of a good thing,” and everybody chooses to ignore it at various points in their lives, the temptation in having the good times last forever too great. In television, for mostly reasons that unfortunately can be classified as financially motivated, successful shows will aim for both, but ultimately fail at keeping up the quality. Even cable comedies with 13 episode seasons tend to show their faces enough years in a row to lead to diminishing returns. Most British shows do not have this problem because they traditionally only air six or seven episodes a season, and shows like Spaced and the recently concluded The IT Crowd can forever be appreciated without having to repress memories of a real clunker of an episode.

But still…wouldn’t it be cool to see a new episode of Spaced? To watch Tim, Daisy, Mike, Brian, Twist and Marcia live their lives just one more time?

We’re only human (I am operating under the assumption that one hundred percent of you reading this are carbon based human beings) – the desire to see a group of characters that you love forever and a day is inherit in all of us. Unfortunately, stories will cease to be new. The established laws of the show’s universe will break. Time will age and bore the actors. A new episode of Spaced after twelve years? That would be an unmitigated disaster, and totally hypocritical considering their take on the new Star Wars movies.

NBC seems to be the broadcast network that most transparently milks its cash cows to the point of quickening its artistic demise. Even ignoring the “supersized” episodes of virtually all of the comedies that ran during the Jeff Zucker era, there was the case of The Office, which was asked three times to provide 26 episode seasons when the standard remains to be 22 or 24 on a free channel, and filmed 28 for its fifth season, considered by most to be the first time the show started to lose its appeal. And long before the reign of Zuck, Brandon Tartikoff asked Cheers to overextend themselves every year once people actually started watching the show. From season three onward, a minimum of 25 original installments of the life and times of the Boston bar employees and its denizens were ordered, with one exception. 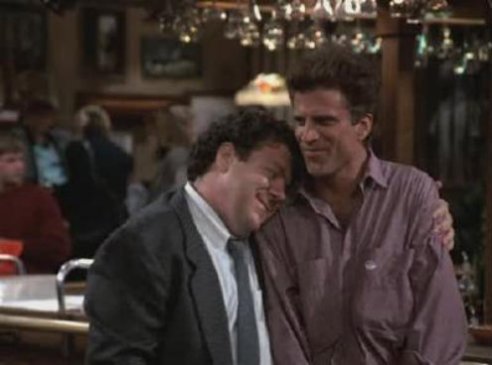 Because of a writers strike, Cheers “only” ran 22 episodes in its seventh season. The shortened order was small on paper, but it made a big difference. It helped provided a focus and return to form that was somewhat abandoned the year before. Even though there were fewer potential nominees, more episodes than ever stuck out as cleverly written and originally funny and worthy of being carried around in the recesses of the brain for years to come. “Jumping Jacks” and “Send in the Crane” particularly come to mind. The former found Norm, Cliff, and Woody lying about going through with skydiving, and then drawing Sam into the deception. The conclusion was unique in its surprising *and* satisfying conclusion, and in some way connecting itself to an episode of Nathan For You. The latter foreshadowed a future where Kelsey Grammar would portray a clown, and seemingly telegraphed the punchline to the big joke that would tie everything together and send everybody home happy, but played off the audience’s expectations and went a different direction with it for even bigger laughs. Because of a last second casting call, Woody couldn’t perform as a clown for one of Rebecca’s bosses’ kid’s birthday party. Frasier stepped in, but Woody never told him that if he were to remove his handkerchief his pants would fall down and reveal his big, funny boxers. Except Lilith had purchased skimpy, “French cut” underwear for Frasier to wear. The expectation is that Frasier would do well performing and then the kids would need years of therapy after witnessing Dr. Crane’s undies. Instead, the performance proceeded with very little trouble, Rebecca got a phone call from Woody informing her of the trick, and informed Frasier. After discussing how fortunate the two were, especially because he had in fact not been wearing any underwear at all, the host of the party sneezed, which is when Frasier’s nice guy reflexes kicked in.

Comedic precision like that can excuse a lot, so Sam’s continued pathetic attempts to bed Rebecca just for the sake of pride more than anything became more tolerable. Besides, for every time Sam resorted to something as desperate as making graphs and charts to convince the boss Ms. Howe into having sex with him (something Marshall Eriksen might do), Mayday Malone managed to successfully charm and date an attractive woman. Last season that was not the case, and because Sam didn’t notice that he was losing his touch and growing more and more pathetic and like Wild E. Coyote, things seemed to be in disarray. One of the reasons given for the failure of the Friends spinoff Joey was that Joey had become a bit of an unsure loser instead of an overly confident sleaze that somewhat managed to be charming anyway. The character that was the center of that show’s universe changed too much and unnaturally. Season seven righted the ship a bit in part because its center was reestablished as a “winner”, although Sam is still lost at sea without Diane (a fact still not discussed by anybody. Diane’s name was mentioned a couple of times, always negatively.) The final scene in “What’s Up, Doc?” was a highlight of the season, possibly because it was reminiscent of all of those basic but fun Sam and Diane talks that concluded older episodes. Sam was troubled after being told that everything he says and does is just so women would have sex with him. Rebecca eventually figured out that this wasn’t true, because he loves The Three Stooges, and women do not find them funny, nor do they find Sam more attractive for him liking them. Not only was this a respectable nod to some comedic legends, it exhibited a very long memory by the writers from a throwaway gag from seasons past where Mr. Malone turned on his television to watch the violent men moments after Diane had turned it off.

Other old school comedians were given some love in season seven, as if Cheers was attempting to show proper respect to their ancestors. After the bar thoroughly confused Ingmar and Ingrid Bergman, Frasier rued the day he ever mentioned Ingmar in the first place, never intending to begin an Abbott and Costello routine. But it would be Cheers and The Simpsons that have now become the “classics,” and the influences are sometimes subtle but always fun to find and think about (and happens to be the premise of this column.) The diminutive and boyish jerk of a boss Martin Teal might be the father of boss Ryan Howard from The Office, and a possible inspiration for Louis C.K.’s suit wearing child agent on Louie. Norm’s secret talent of interior decorating is of the “hidden talent” trope, which is so prominent now that I doubt Cheers did it first, but it was worth mentioning, since Norm didn’t have much to do this year. Woody spending his week-long vacation at the airport because he missed his flight was reminiscent of Newsradio’s Matthew purchasing gifts that he believed to be Japanese for his co-workers at the airport and lying about the part about actually going to Japan. Mr. Anawalt getting arrested by the FBI for insider trading moments after giving Rebecca a huge promotion was similar to George’s fears of a potential employer revealing that he was under investigation actually coming true on Seinfeld.

The service given to everybody on this ensemble cast to make sure they don’t remain in stasis, without ever thoroughly changing who they are, is something that has been copied time and time again. The shortened season may have cost Norm’s yearly episode of acknowledging his depression, but it did feature the aforementioned interior decorating episode, and an episode where Rebecca pushed Norm to help him run a painting for hire business (which didn’t last.) Carla’s husband Eddie only appeared in two episodes, both openly asking if Eddie is actually a nice guy or not. When Carla thought Eddie was cheating, she was convinced her aggressive behavior was what was continually driving men away and briefly attempted to change who she was, until of course she found out he wasn’t being unfaithful. Cliff was disheartened after everybody forgot to visit him in the hospital after his appendectomy, so in “How to Win Friends and Electrocute People” (not the most clever title), Cliff was convinced that his obnoxious behavior was what was continually driving people away and briefly attempted to change who he was, resorting to electroshock therapy. After receiving multiple shocks at the bar (this was thankfully the broadest comedy Cheers produced that year) he was told that it was enough that he tried, and the matter was dropped. Mr. Clavin also, maybe, possibly, lost his virginity to Maggie, a fellow mail carrier, who he fell in love with and almost moved to Canada with to start a new life, until a rare Cheers callback to a different storyline changed his mind. Woody continually develops intelligence and more and more of a backbone as time goes on while continually being painfully oblivious when the joke calls for it, earning himself a three episode story arc with a love interest played by Kristy Swanson. Lilith appeared in half of the episodes and got herself pregnant, and shared plots with Sam and Rebecca. Rebecca herself more firmly acknowledged her fascination with bosses and her careerism, without kicking the habits or even seeing anybody who audited a single psychology class to help.

It looks like it’ll be back to a bigger than normal workload for the gang at Cheers the rest of the way, with a little over one hundred more episodes left to be exact. Does Cheers prove that you can have 275 episodes of a good thing? Were they unwittingly responsible for convincing NBC it could get away with genetically mutating comedy into absurd portions? Will the next four weeks explain some executive decisions made by Jeff Zucker? I don’t know what I want the answer to that last question to be.